Some back-of-the-envelope calculations: If we get what President Elect Trump says he wants — no depreciation of the yuan — what happens to the Treasury 10 year-3 month spread? 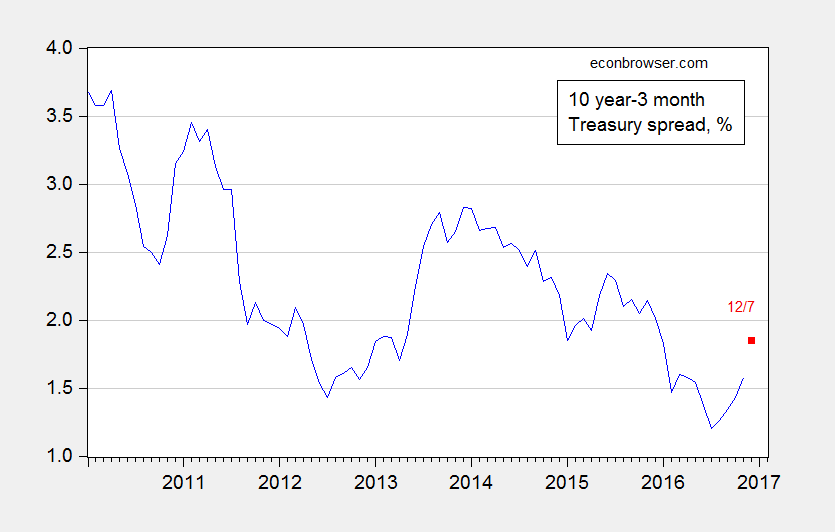 Brad Setser estimates China’s October reserve decumulation at $40 billion — which annualized amounts to about $500 billion/year. And even then, the yuan depreciated 0.9% against the dollar in October! Keep this up for a year, and we can see the implication for the Treasury spread by appealing to estimates in Kitchen and Chinn (2012). Table 1 presents estimates from a regression of ten year yields on the cyclically adjusted budget surplus, Fed purchases and foreign purchases (plus activity variables).

Constraining the slope coefficient on these three variables to be equal (after sign switches), we obtained a point estimate of 0.335 (circled in red).

Potential GDP according to CBO in mid-2017 averaged $19462 billion (SAAR). Suppose about 2/3 of the $500 billion in reserve sales is in Treasurys; then $333 billion amounts to about 1.7 percentage points of potential GDP. Using our estimate of 0.335, I get an elevated ten year yield of 0.6 percentage points relative to what otherwise would have occurred.

Now, recall, the yuan depreciated 0.9% against the USD from September to October (log terms), or 10.8% annualized, even with $40 billion of reserve decumulation. So to stabilize the yuan against the US dollar (holding all else constant) means even more sales of US Treasurys, and commensurately larger spread increases.

1 thought on “Raise the Yuan! Implications for the Treasury Spread”