Today, we are pleased to present a guest contribution written by Laurent Ferrara (Adjunct Professor of Economics, University Paris Nanterre, France). The views expressed here are those solely of the author.

Trying to assess macroeconomic consequences of the Brexit seems to be too early as we only get at best 3 quarters of national account data since end of June 2016 (the referendum took place on June 23, 2016). However, looking at recent data is fruitful. The latest data on UK GDP have been published by the ONS on May 25, 2017, and relate to 2017q1. Although the second estimate for 2017q1 is quite low (0.2% quarter over quarter, downward revision of 0.1pp from the first release on 28 April 2017), we do not observe a marked slowdown since the onset of the Brexit (see the ONS website). The average growth since the Brexit (from 2016q3 to 2017q1) is 0.45% per quarter, to be compared with 0.63%, the average growth per quarter over the years 2013-2015 (all growth rates not annualized).

When looking at the composition of UK GDP growth, it turns out that growth is mainly supported by household consumption for few years. However, business investment, a key driver of GDP growth and potential growth, seems to have reached a peak in its cycle (see Figure 1 below). Since its peak in 2015 q3, business investment dropped by -2.7% in cumulative terms. 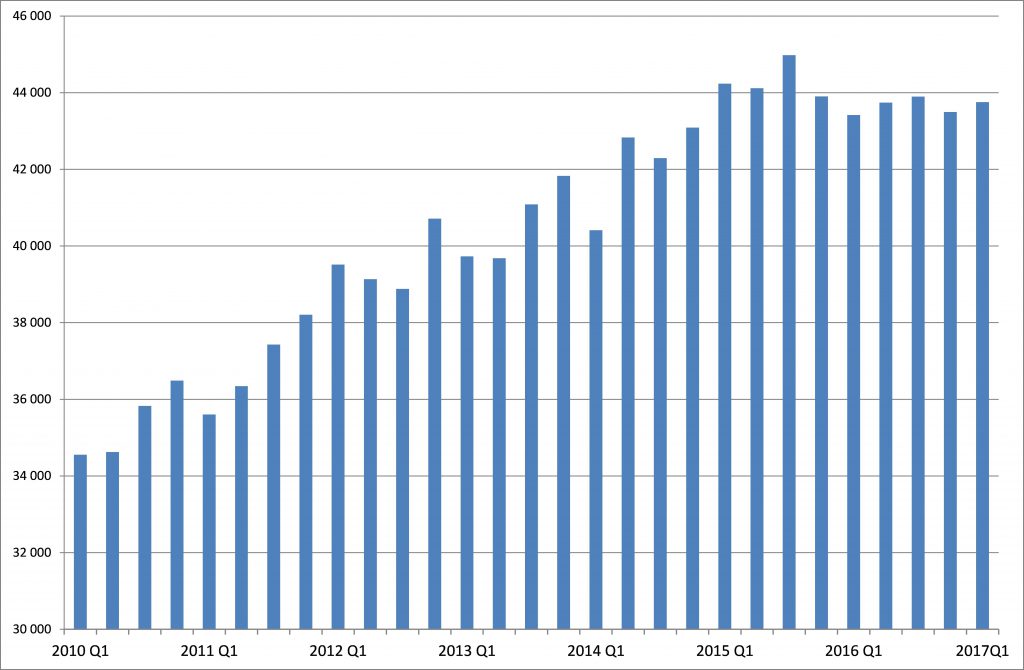 The literature on business investment tends to show that expected demand is the main driver, although many other short-term factors may be at play (see the IMF’s World Economic Outlook chapter on investment or this previous Econbrowser post). In a recent paper (Bussière, Ferrara and Milovich, 2015, WP Banque de France), we show that, using standard augmented accelerator models, expected demand explains more than three-fourth of the investment slump in a panel of OECD countries since the 2008-09 Great Recession. But we also show that uncertainty has an adverse impact on business investment, in line with the large existing literature on the topic (see e.g. Bloom, 2014).

One could argue that 2015q4 is well ahead of the Brexit referendum, but it is striking to observe that this date corresponds to the moment when the economic policy uncertainty (EPU) in the UK started to skyrocket (see Figure 2). This EPU index is based on the frequency of some specific words appearing in newspapers, reflecting thus a sentiment of uncertainty related to a large extent to the Brexit referendum. Another well-known measure of uncertainty is the dispersion among forecasters (on this topic see for example Bachmann, Elstner and Sims, 2013 AEJ Macro). The dispersion within forecasts is supposed to reflect the degree of uncertainty that economists face about future activity. In this respect, we compute the distribution of forecasts for UK GDP for 2017 in the Consensus Forecasts before (i.e in June 2016) and after (i.e. in July 2016) the referendum outcome. We clearly see in Figure 3 that the empirical distribution in July (red line) shows a shift to the left as well as an increase in tail events. This latter phenomenon is visible both on the left right tails, as expected from an uncertainty shock. 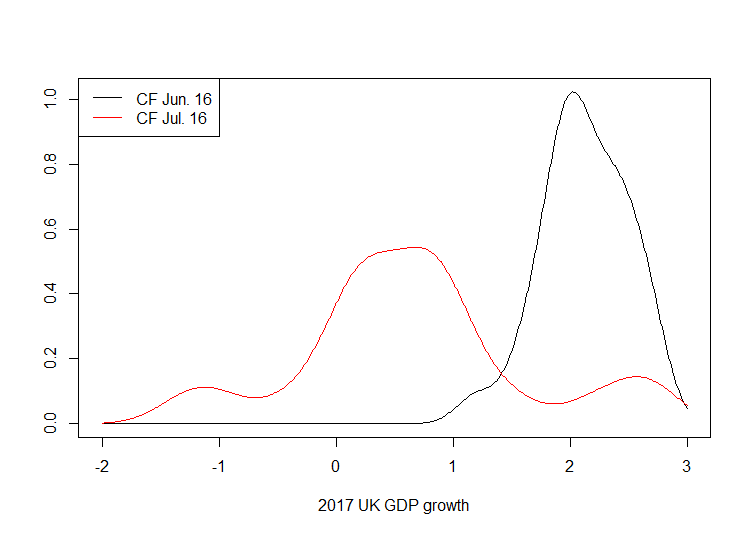 Thus, overall, it seems that an uncertainty shock indeed struck the British economy in the wake of the referendum outcome. But in fact the key issue is about the nature and extent of the effect on the British economy. In this respect let’s have look at subcategories of investment. 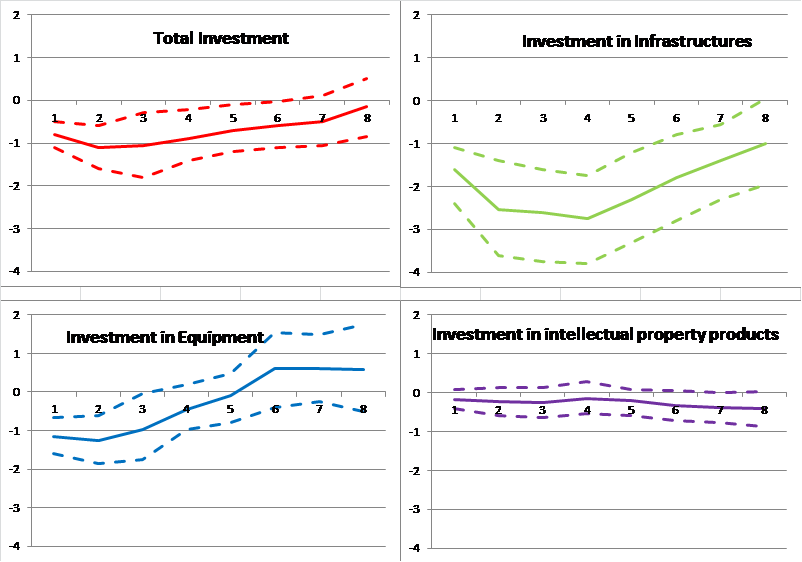 Figure 4: Impulse response functions of various types of investment to an uncertainty shock in the US. Source: Ferrara and Guérin (2015, Bank of Canada Working Paper) .

Interestingly, it turns out that investment in the UK reacts as expected by our model for the US economy that can be seen as a benchmark for any industrialized country. Indeed Figure 5 shows the cumulated drop starting from the peak in investment in 2015q3. We clearly see the opposition between equipment and infrastructures, on the one hand, and intellectual property, on the other hand. Obviously, other factors may be at play in the decrease of investment (e.g. the drop in oil prices is likely to have affected investment in the energy sector), but so far investment dynamics looks very similar to the one following an uncertainty shock. 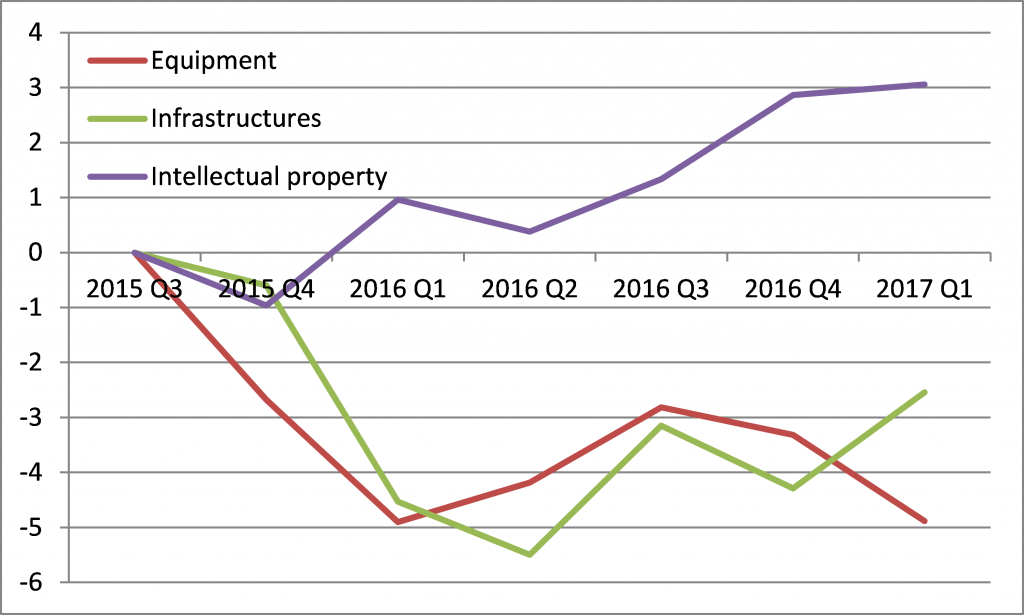 Figure 5: Growth of various types of UK business investment since the peak in 2015q3 (% in cumulative terms). Source: Office for National Statistics

Although the negotiations for the real exit of the UK from the European Union have only recently started (officially the 29th of March), we can already see in the observed data the first signs of the uncertainty shock on business investment. The level of investment has started to decrease and the most irreversible type of investment has been the most affected, in line with expectations from theoretical models. However, this uncertainty shock is non-standard and differs from what is typically assumed in the literature as the shock itself is likely to last few quarters. Indeed, there are several potential sources of conflicts between UK and EU, starting with the cost of the divorce (see this policy brief by the Center for European Reform, Feb. 2017). It seems reasonable to wait for the upcoming flow of data before drawing definitive conclusions on the macroeconomic consequences of the Brexit.

1 thought on “Guest Contribution: “Uncertainty and business investment in the UK after the Brexit””