That’s how Larry Summers described the growth forecasts underpinning the Trump budget released today. And I can’t really disagree, regarding the medium to longer term forecasts.

Apparently, the budget forecasts that U.S. economic growth will rise to 3.0 percent because of the administration’s policies — largely its tax cuts and perhaps also its regulatory policies. Fair enough if you believe in tooth fairies and ludicrous supply-side economics.

Then the administration asserts that it will propose revenue neutral tax cuts with the revenue neutrality coming in part because the tax cuts stimulate growth! This is an elementary double count. You can’t use the growth benefits of tax cuts once to justify an optimistic baseline and then again to claim that the tax cuts do not cost revenue. At least you cannot do so in a world of logic.

The detachment from reality is shown in this figure, which is an update of a figure in this post. 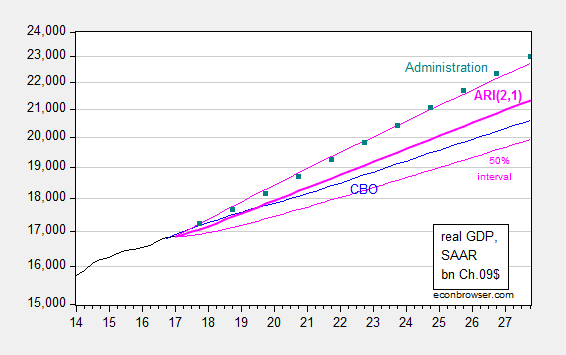 Notice that the White House forecast predicts substantially faster growth than the CBO does. Now, it is true that the CBO does a forecast conditional on current law, while this White House does a forecast condition upon implementation of the Administration’s budget, and supply side responses to Lafferian dream measures like massive tax cuts and deregulation. Historically, the CBO’s forecast is more accurate (according to the root mean squared error criterion), despite the conditioning on current law.

Of course, there are dissenting views, including those of the ever-present Stephen Moore. Here is his tightly reasoned, quantitatively buttressed argument:

In this Trump budget the White House is predicting 3 percent plus growth over the next decade once the tax cut, deregulation, and ObamaCare repeal are enacted. ‎Liberals and the media are protesting that Trump can’t deliver 3 percent growth and that his forecast is “unrealistic” and a “rosy scenario.”

What hypocrites. Every Obama budget assumed 3 percent to 4 percent growth and I don’t recall the wailing and gnashing of teeth even though Obama’s policies failed to get us over the 3 percent low hurdle in a single year.

So are we really supposed to believe that Obama could get unleash 3 percent to 4 percent growth by raising taxes, but Trump can’t do it by cutting onerous taxes?

That’s from Mr. (not Dr.) Moore, who is also a collaborator on the information-free ALEC-Laffer state economic outlook ranking.