Or, the GOP plan to eliminate the surplus population

CBO and JCT estimate that enacting this legislation would reduce the cumulative federal deficit over the 2017-2026 period by $321 billion. That amount is $202 billion more than the estimated net savings for the version of H.R. 1628 that was passed by the House of Representatives.

Here is a time series plot of the number of uncovered under the Senate bill (the Better Care Reconciliation Act of 2017), the House Bill, and current Law. 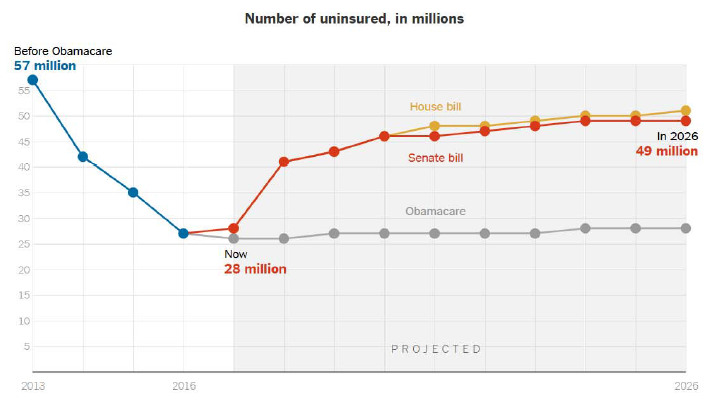 A substantial component of the entire plan involves reducing spending for Medicaid relative to current law baseline (which :

By 2026, among people under age 65, enrollment in Medicaid would fall by about 16 percent and an estimated 49 million people would be uninsured, compared with 28 million who would lack insurance that year under current law.

One way to think about the overall project is that Medicaid spending (which benefits primarily lower income households) is slashed by $772 billion in order to finance $541 billion of tax cuts, the bulk of which will go to high income households. In this sense, the plan is entirely consistent with Republican policy measures proposed in recent years, so kudos for consistency of goals. The redistribution is illustrated in CBO Figure 1. 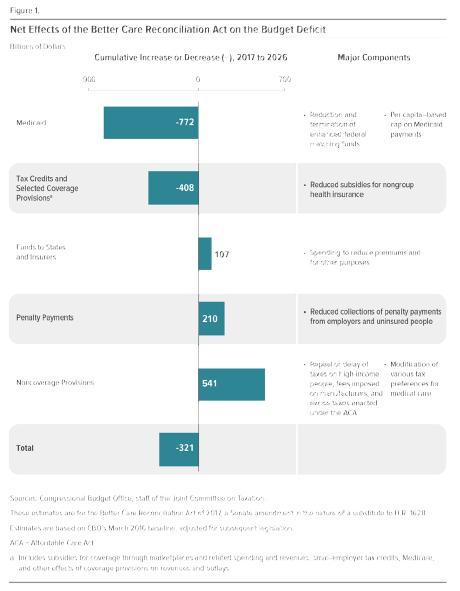 Given the reduction in coverage of non-elderly adults by 2026 is 22 million, we can use the estimates provided by Center for American Progress to judge that mortalities will be elevated by about 207.5 thousand (cumulative) over the next decade, and deaths in 2026 elevated by about 26,500. In this context, the title of the Senate “Better Care Reconciliation Act” (I think “bitter” is more apt) is truly Orwellian.