Well, I don’t think a few tariffs and quotas, plus “tweaking” Nafta, are going to do it. And blowing a hole in the Federal deficit ain’t likely to help.

First take a look at the trade deficit as defined in the national income accounting sense (i.e., “net exports”), expressed as a share of GDP: 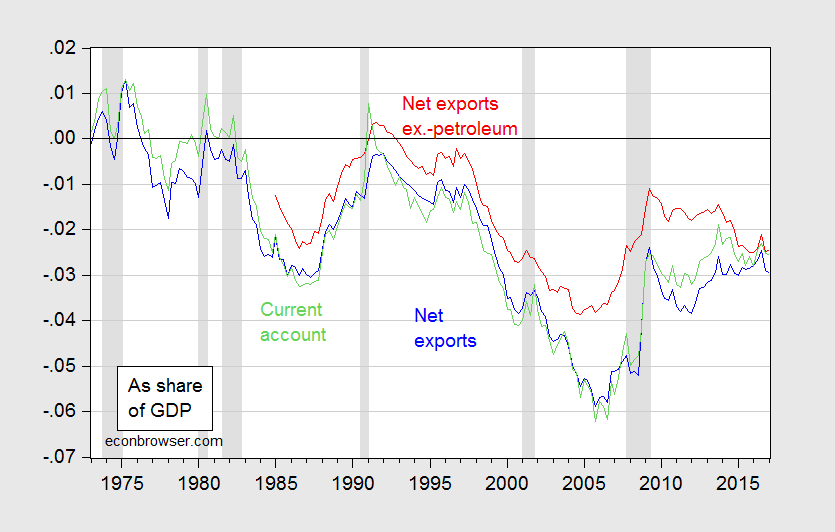 Notice that net exports have improved since the onset of the Great Recession, in part because of slower growth, a depreciated dollar, and an increases in petroleum product exports (as highlighted by the fact that the ex-petroleum net export series moving closer to balance than the overall). The dollar’s value is one key factor in these movements. Below in Figure 2, the dollar exchange rate against a broad basket of currencies (defined such that a downward movement is a appreciation) is graphed, lagged two years, against net exports, ex-petroleum (under the presumption that exchange rates do not exert direct effects on oil prices which are denominated in USD). 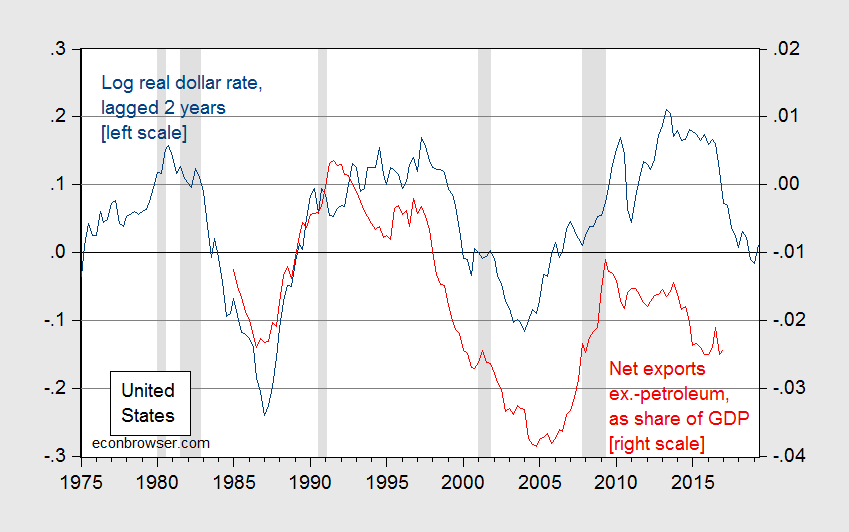 So, the question is whether trade measures will have a noticeable impact on the trade balance (this is a separate question from whether it’s welfare improving to impose such barriers). The answer depends in large part whether you think the impacts of US income and the dollar’s value (the two key variables) are going swamp any changes in relative prices coming from tariffs and quotas imposed at the sectoral level.

I tend to think that level of US national saving (the sum of government budget surplus and private saving) and desired investment tend to drive the trade balance (approximately the current account, as shown in Figure 1) more than the trade balance drives the US budget balance, private saving and investment. In that framework, trade protection measures have second order effects, unless they were to drastically change these macro aggregates. Tariff revenues are too small to affect the budget balance. It is hard to see how they increase private savings; maybe they could affect investment in protected sectors — but that works in the wrong direction. (More on the national saving identity here).

So, the Trump project of reducing trade deficits through protection, while maintaining growth (protection which triggers retaliation and a global slowdown could “work” to reduce the US trade deficit) is doomed to fail.

Something to remember, as the House starts trundling toward massive budget busting tax cuts (well, unless you believe spending cuts will be imposed in line with the tax cuts; if you do, well David Stockman has a bridge to sell you).

Addendum: For an econometric analysis of trade elasticities, see this paper. My estimates for the elasticity of non-agricultural goods exports are around unity, those for non-petroleum goods imports around -0.5 (for data through 2010).

In recent (non-published) work, Hiro Ito and I find that (updating Chinn-Eichengreen-Ito) the current account responds by about 0.6 percentage points of GDP for each percentage point change in the budget balance.

9 thoughts on “So You Want to Fix the Trade Deficit?”