Or, Stephen Moore Is (Still) a Liar

On July 9th, 2014, the Wichita Eagle published an op-ed by Mr. Stephen Moore:

No-income-tax Texas gained 1 million jobs over the past five years; California, with its 13 percent tax rate, managed to lose jobs. Oops. Florida gained hundreds of thousands of jobs while New York lost jobs. Oops. Illinois raised taxes more than any other state over the past five years, and its credit rating is the second lowest of all the states, below that of Kansas. [emphasis added MDC]

Now, as of July 9th, one would know employment figures for May 2014. Let’s plot the data that he should have been looking at. 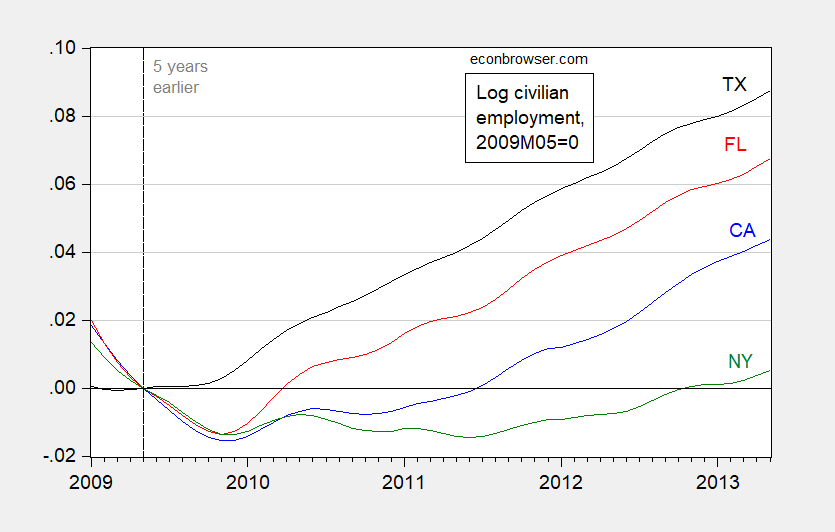 The astute observer will note that this graph does not match with Stephen Moore’s characterization. Yael Abouhalkah determines that one reason for the disjuncture is that Moore actually used calculations for December 2007 to December 2012. Why would Mr. Moore use a sample ending in 2012 for an article in mid-2014? Maybe because the picture is much more amenable to his thesis. 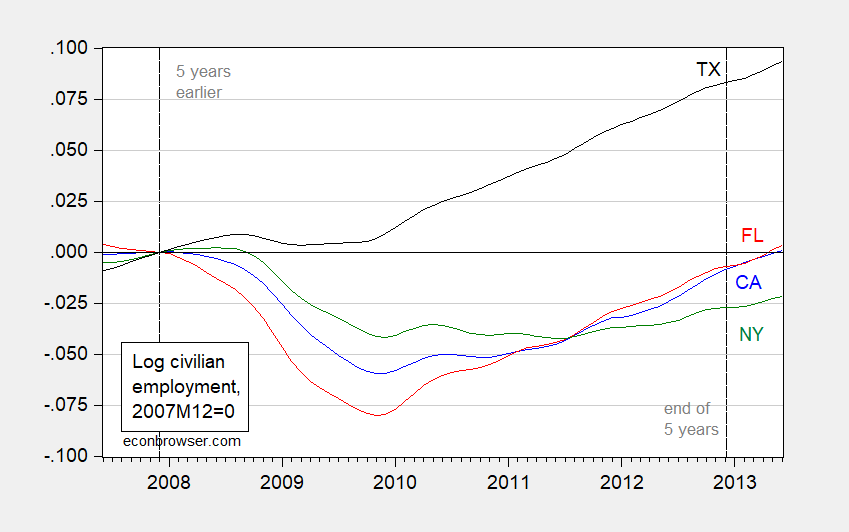 Notice, even then, the pattern of changes does not match up with what Mr. Moore described. That’s because he added up the numbers incorrectly. Moreover, the household survey, upon which the civilian employment series is based upon, imprecisely measures employment at the state level, given the relatively small samples used (see this graphical depiction). The latest vintage of these series differs from those Mr. Moore knew of in July 2014.

Why did he use this imprecisely measured series? This question takes on a heightened importance given Mr. Moore’s emphasis on “jobs” in the op-ed, since the establishment series tabulates jobs, while the household series tabulates employed individuals. What does Figure 1 look like using nonfarm payroll numbers? 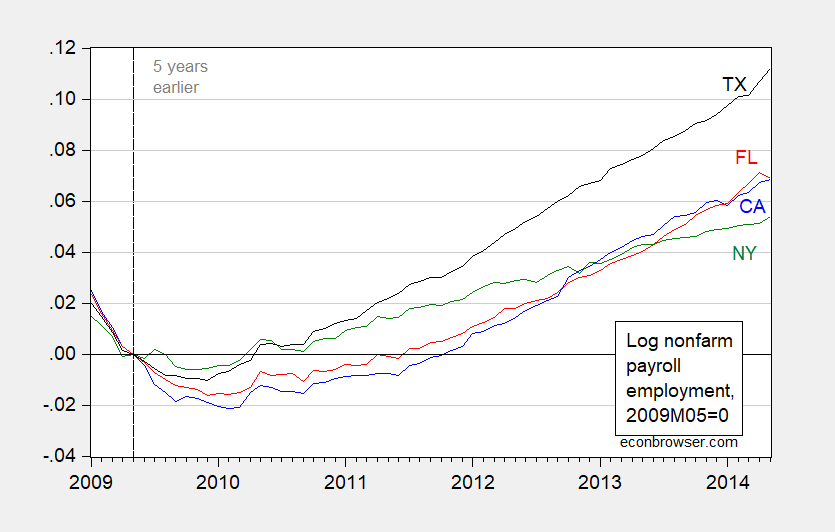 Note that, while Texas still leads, Florida and California tie, hence casting doubt on the thesis that low income taxes necessarily lead to faster employment growth. Of course, anybody with a rudimentary knowledge of the (absence of) correlation between the Moore-Laffer-ALEC economic outlook ranking and economic growth would know any relationship found by Mr. Moore would be fragile.

This episode prompted the Kansas City Star to ban Mr. Moore from their publication.

Mr. Moore has never provided an explanation for the selection of time sample used in his original op-ed. Something to remember when he asserts tax cuts result in higher tax revenues (also in 2005).