Ongoing rate hikes are likely to tighten financial conditions, at least gradually, and we expect growth to slow to a trend pace through 2019 even with fiscal stimulus still helping. From 2020, when the fiscal impulse ends, the risk of recession looks set to rise, but the lack of cyclical excesses in borrowing and spending suggest that an outright contraction is far from a foregone conclusion—so long as Fed officials manage to prevent a big overheating.

When I first read of this comment, I was dubious. Then I remembered we were already halfway through 2018, and so only a year and a half remains before 2020… and the yield curve looks like this: 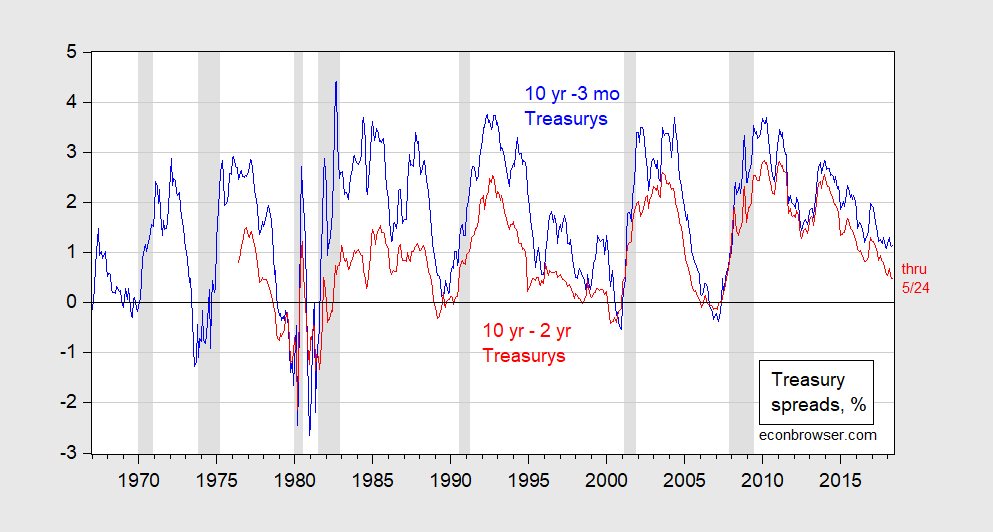 While no inversion yet (at the 10yr-3mo, 10yr-2yr), there is a definite flattening. The flattening in the 10yr-30mo spread over the last year has come from higher short rates (see this post). As remarked upon in this excellent review of the yield curve/recession literature by Cyrille Lenoel at NIESR:

[U]sing the yield curve to predict upcoming recessions is an easy and model-free way of extracting some of the information contained in the government bond market to forecast an event that is otherwise very difficult to predict. Our own research and that of the New York Fed and the San Francisco Fed3 suggest that the possibility of a recession in the US has risen somewhat over the past year but it is still far from our central case outlook.

Lenoel uses the methodology used in Chinn and Kucko (2015), but instead of predicting recession 12 months ahead, he forecasts the onset of the recession within the next 12 months. This leads to the following recession onset probabilities (through March 2018): 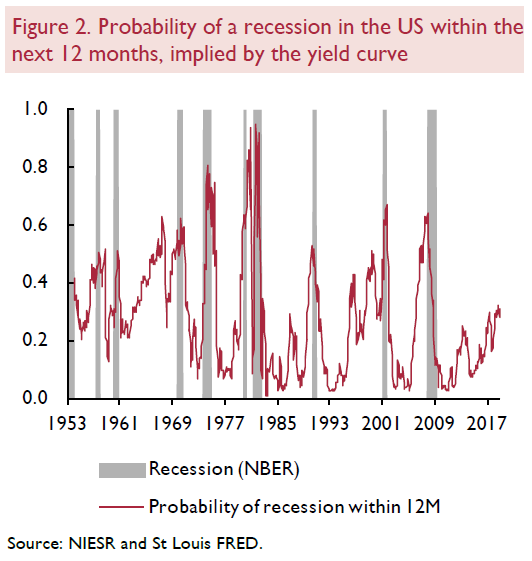 The implied probability of recession onset within the next 12 months is nearly 31%, for a March 10yr-3mo spread of 1.1%. The spread in May was essentially the same (while the 10yr-2yr spread has shrunk).

See also the SF Fed discussion of alternative spread and asset price based predictors of recession.