Does Harvard stand behind the study, or not?

That is, does Harvard SPH believe that the central estimate of excess deaths to 12/31 is 4645, or not? Does it stand behind the confidence interval, or not? Is there still a 50+ probably that the death toll comes in over 4600? If there is, then the people of PR need to start looking for the 3,250 missing or the press needs to assume PR authorities are lying. Those are the implied action items.

Or should we just take whatever number HSPH publishes in the future and divide by 3 to get a realistic estimate of actual?

Let’s show a detail of the graph previously displayed (in this post): 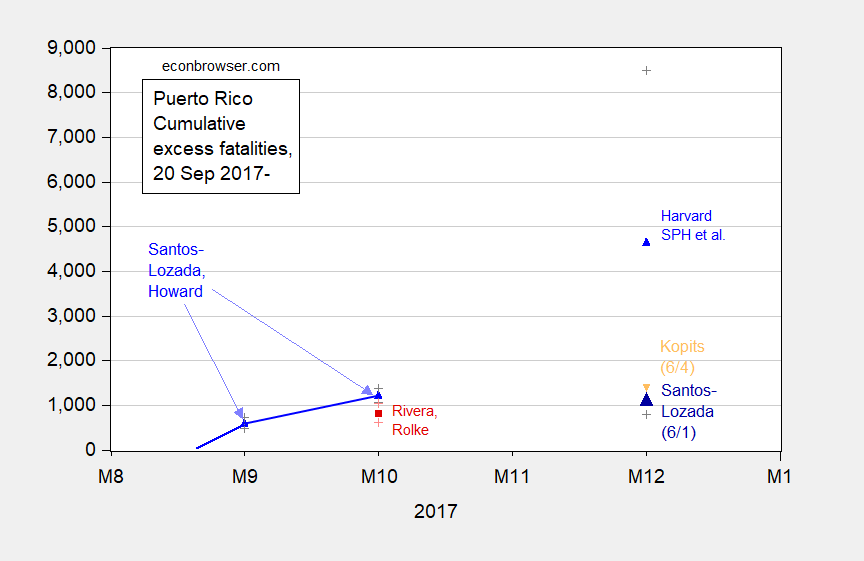 “Were this procedure to be repeated on numerous samples, the fraction of calculated confidence intervals (which would differ for each sample) that encompass the true population parameter would tend toward 95%.”

In other words, it is a mistake to say there should be a 50% probability that the actual number will be above the point estimate. But that is exactly what Mr. Kopits believes a confidence interval means. He is in this regard incorrect. From PolitiFact:

University of Puerto Rico statistician Roberto Rivera, who along with colleague Wolfgang Rolke used death certificates to estimate a much lower death count, said that indirect estimates should be interpreted with care.

“Note that according to the study the true number of deaths due to Maria can be any number between 793 and 8,498: 4,645 is not more likely than any other value in the range,” Rivera said.

Once again, I think it best that those who wish to comment on estimates should be familiar with statistical concepts.

94 thoughts on “Another Thing I Thought I’d Never Have to Explain on Econbrowser: Confidence Interval”