One irrelevant graph and one (possibly) relevant graph, in light of Mr. Trump’s statement on additional trade sanctions.

First, the irrelevant: the US-China trade deficit, which has been deteriorating over the first five quarters of the Trump administration. 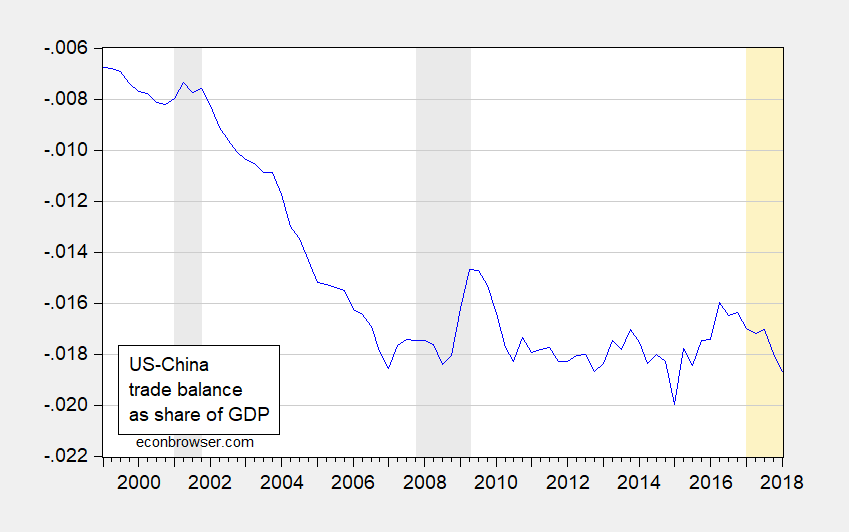 Why one should care about the the bilateral balance, particularly when there is a large foreign value added share, is a good question, and one addressed here. (One shouldn’t). But to the extent you think of the bilateral trade deficit as “a loss”, well by that (stupid) criterion, we’re losing.

Next, a possibly relevant graph. 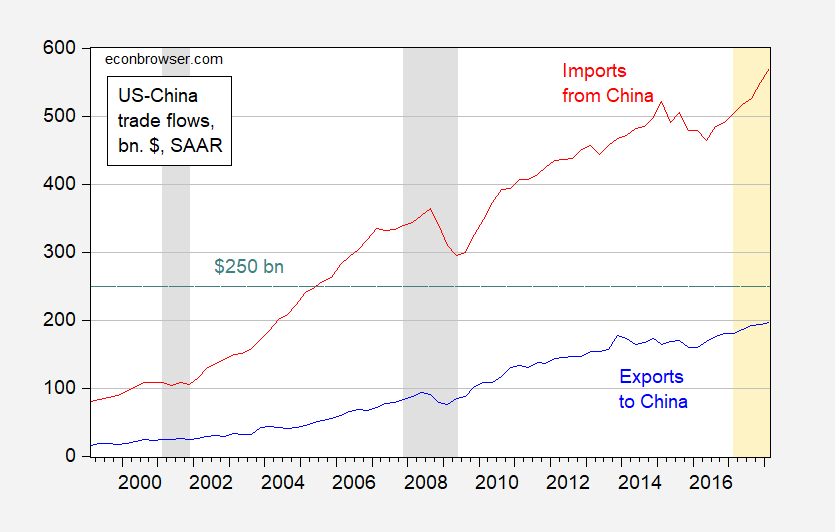 The interesting point is that if Mr. Trump were to impose an additional $200 billion worth of imports covered, then China would be hard pressed to retaliate in a direct fashion, US exports to China are less than $250 billion. However, as Brad Setser has pointed out, this would mean that some consumer goods (PCs, tables, phones) would have to be taxed by the US, resulting in a more visible increase to consumer prices.

And China could retaliate along other dimensions, like visas, investment, etc. (see here). And there is the commercial equivalent of asymmetric warfare (in this context, things like more regulatory checks, etc.)

There is also the question of who will experience more damage from the tariff exchange. Since China is on a managed float, it could intervene to weaken its currency to partially offset the tariffs (it’s not quite one-for-one, since depreciation increases the costs of inputs).

There is also a question of whether say an additional $200 billion covered imports reduces US imports more or less than the corresponding tariff reduces Chinese imports. To the extent that Chinese tariffs are going to hurt primarily agricultural goods, then one would presume a fairly high elasticity of demand, so a big decline in exports to China. To the extent that China is exporting mostly differentiated manufactured goods, a priori, I’d think that those elasticities would be lower. Hence, I’d expect US imports from China to be more resistant than Chinese imports from the US. But that’s all speculation — and all cet. par. As mentioned earlier, the Chinese would undoubtedly manage the CNY. Then these elasticity estimates become relevant.

29 thoughts on “Round Two for US-China Trade?”