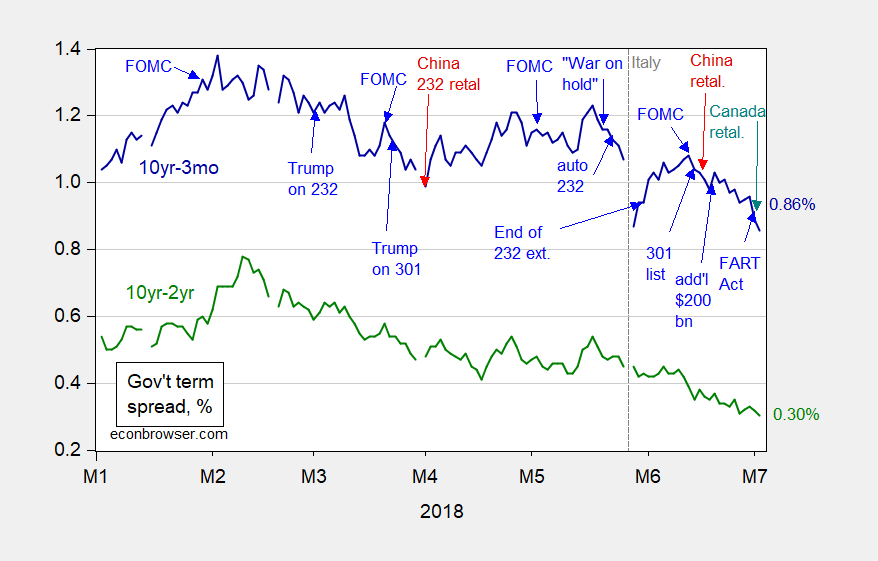 Now, you might be wondering what trade policy has to do with recession/no recession as implied by the yield curve. As a recent note by Deutsche Bank (How to think about the impact of trade frictions on US GDP, 2 July 2018) observes, there are pluses and minuses to output arising from these trade action:

[H]ow [could] these trade actions could impact the macro economy[?] The threat and/or imposition of the tariffs could have potentially significant positive effects on GDP by lowering imports, but these effects would most likely be swamped by various negative effects if the tariffs are actually implemented.

1. Threat of tariffs induce negotiations. The hope is that the threat of tariffs will beget larger concessions from China in negotiations to reduce China’s own trade barriers. But China may have a different view of the relative magnitude of trade barriers in the two countries. Chinese officials have said consistently that they will not negotiate under such pressure and that China will retaliate in kind to any measures the US takes. …

1. Rising prices depress consumption. The tariffs would raise the prices of imports of metals and autos from a number of countries and imports from China more broadly. The overall effect on US prices could be magnified if domestic or other foreign producers take advantage of the opportunity to raise their own prices. We estimate that the tariffs listed above could raise consumer prices in the US by about 0.6%. This increase in prices would depress real household income and consumer spending by the same percentage. With consumer spending accounting for 70% of GDP, total GDP would be depressed by more than 0.4%, offsetting most of the gain from reduced imports.

2. Retaliation depresses exports. Europe and Canada have already retaliated proportionately to the metal tariffs, others are in the process of doing so, and China has promised to raise tariffs on US exports if the threatened US measures are imposed. …raise negative impact on exports to 0.2% of GDP. If a 20% tariff on US imports of autos was matched abroad, as could be expected, US exports could be depressed by another 0.35% of GDP, bringing cumulative losses in US exports to about 0.55% of GDP.

4. Negative impact on global GDP could be similar in magnitude [to 1% of GDP]. The
disruption to global supply chains and greater dependence on world trade in many countries increases their sensitivity to the increase in uncertainty created by these trade conflicts. …

Many of the above are mere projections, and estimates. We can already see some concrete manifestations of the impact of trade policies and trade policy uncertainty on commodity prices — in particular, nearly one-year-ahead soybean futures (expiring July 2019). Planting plans and weather conditions right now should not directly affect output a year from now, so that trade policy effects should dominate. Carry costs should drive a wedge between actual and futures prices, but econometric work (Chinn and Coibion, 2014; Reichsfeld and Roache, 2011) suggest that futures are unbiased predictors of future spot prices, and smallest RMSPE among typical time series models. Now, contemplate the evolution of futures prices over the period corresponding to that in Figure 1. 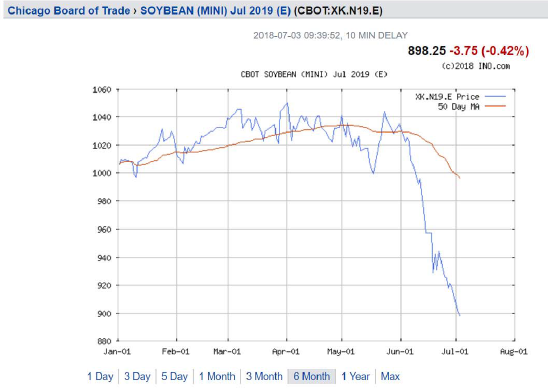