For whatever reasons — capital outflows, PBoC non-intervention — the yuan has depreciated substantially since the Trump administration has announced Section 301 actions against China. This has implications not just for the CNY/USD exchange rate, but also other East Asian currencies.

It’s interesting to note how the overall US trade weighted dollar against a broad basket of currencies comoves with the CNY/USD exchange rate. 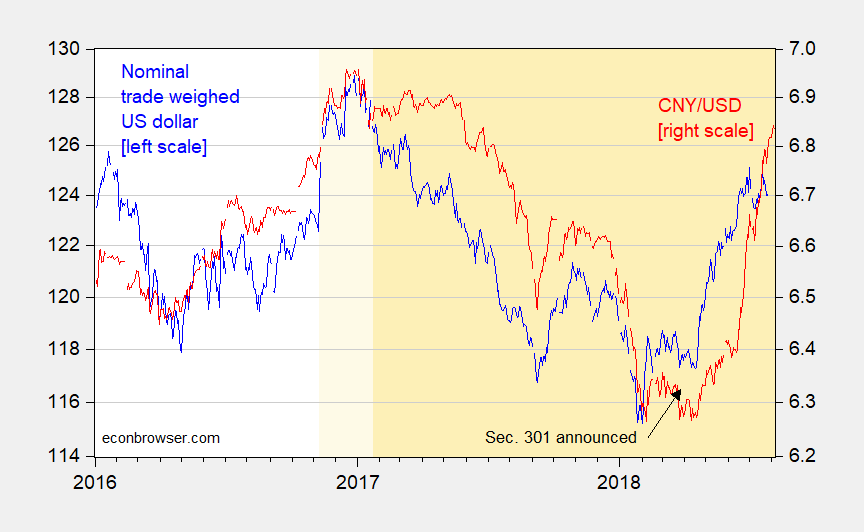 This association — representing a clearly non-structural parameter — is suggestive, but does not answer the question of what happens to other currencies when the CNY depreciates. In Chinn (2014), I found that post-2005, increasing evidence of a regional RMB zone, which made sense given the development of global supply chains involving China. However, by now those results are very out of date. A more recent assessment is by McCauley and Shu (2018) (presented earlier at this conference):

The key message of our analysis is that it is premature to declare a stable renminbi zone, defined as a set of jurisdictions with currencies that share more than half of the renminbi’s movements against the dollar (ie for which β1 exceeds 0.5). Such a zone has the force of trade links, business cycle correlations and possibly increased financial links behind it, but it evidently depends on a multilateral and predictable management of the renminbi’s exchange rate. In the period since May 2017, our estimates of β1 suggest a strictly northeast Asian renminbi zone.

Their conclusion means it’s an open question what will happen to other East Asian currencies as the CNY depreciates. If the Chinese authorities have given up on basket management, then the comovement of other currencies with the CNY may be minimal (although how the other central banks of the region will react also matter). If the East Asian central banks want to stabilize against the CNY, then the US trade weighted currency might appreciate more than implied by the 21.6% weight accorded the CNY. This in turn would mean more headwinds for Mr. Trump’s goal of a reduced US trade deficit.

21 thoughts on “As the CNY Goes, East Asia Goes…Maybe”