Today, we are pleased to present a guest contribution written by Laurent Ferrara (Banque de France), Ignacio Hernando (Banco de España) and Daniela Marconi (Banca d’Italia), summarizing the introductory chapter of their book International Macroeconomics in the wake of the Global Financial Crisis. The views expressed here are those solely of the author and do not reflect those of their respective institutions.

A decade after the eruption of the Global Financial Crisis (GFC), the world economy has finally returned to a more sustained pace of expansion (see Fig. 1). 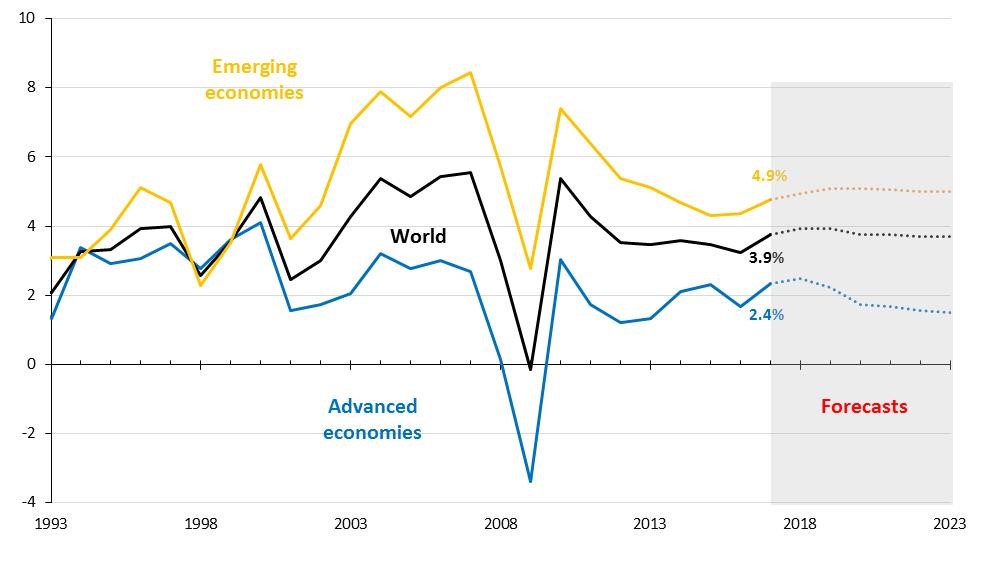 Yet major challenges still remain, as the engines of long-run growth have still not recouped their pre-crisis power. The subdued growth in productivity in advanced and emerging countries alike, the slow recovery in investment and the persistently low income elasticity of international trade are all casting a long shadow over growth in the medium and longer term, calling for a deeper investigation of their root causes and of the possible policy remedies. However, disentangling the cyclical factors from the structural ones, in order to engineer the most appropriate policy responses is proving to be a difficult task. The first section of this book aim to shed some light on the structural and cyclical factors at play behind the slowdown in the supply-side drivers of economic growth, by revisiting the debate on the secular stagnation hypothesis (P. Pagano and M. Sbracia); the slowdown in productivity growth in emerging market economies (E. Di Stefano and D. Marconi; I. Kataryniuk and J. M. Martinez-Martin) as well as the debate over rising income and wealth inequality, especially in advanced economies (R. Cristadoro).

The second section of this book is devoted to the analysis of the components of aggregate demand in the wake of the GFC. A. Borin, V. Di Nino, M. Mancini and M. Sbracia investigate the causes of the sluggish recovery in global trade volumes and the fall in the income elasticity of trade. They show that the income elasticity of trade is highly cyclical, rising above unity during periods of above-trend GDP expansion and falling back to around unity in the long-run. As a consequence, one would expect income elasticity to recover as economic activity, and especially investment, goes back to their long-run trend, returning towards one and only exceeding this value if GDP and investment growth remain persistently above trend. In the years preceding the GFC, above-trend growth in aggregate demand, and particularly in consumption in the United States, was fueled by the expansion of debt. However, excessive indebtedness eventually resulted in the sub-prime crisis which triggered the GFC (V. Grossman-Wirth and C. Marsilli). Alongside trade, and strictly connected to it, business fixed investment remained depressed worldwide, particularly in major advanced economies, for a prolonged period of time after the crisis, only showing initial signs of recovery in recent months (see Fig. 2 below). The analysis conducted by I. Buono and S. Formai shows that the GFC has brought about a structural change in the determinants of investment demand, with financial uncertainty affecting the speed of recovery in fixed capital formation to a greater extent than previously. Moreover, in some countries, most notably the peripheral European countries, business investment has become more sensitive to changes in borrowing costs in recent years. 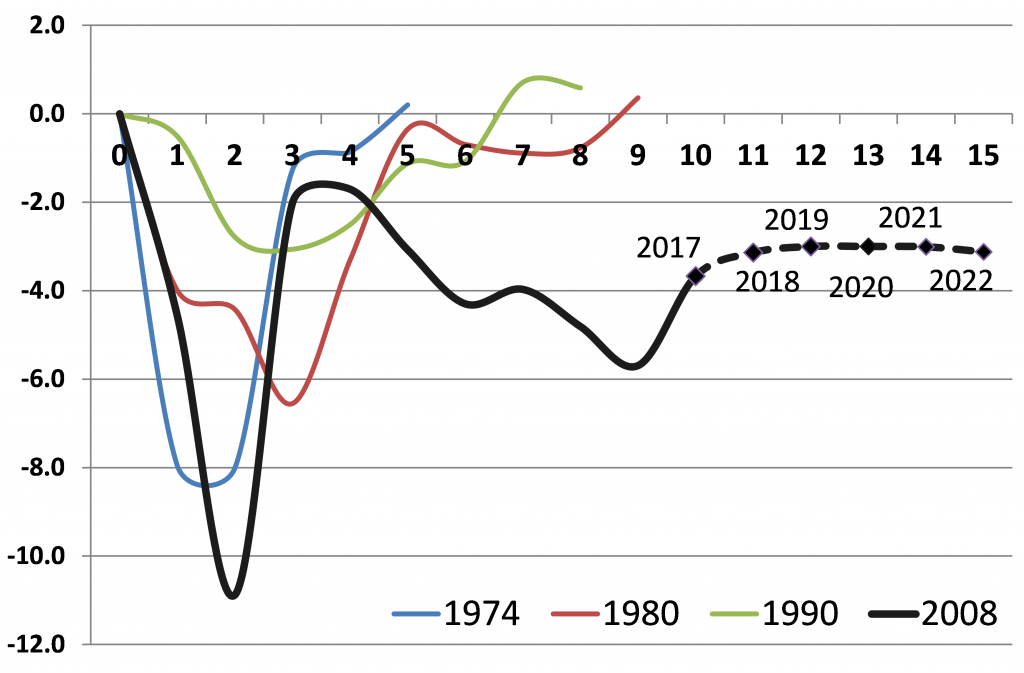 In the wake of the GFC, central banking – and, in particular, monetary policy management – in advanced economies went through deep transformations, entering unchartered waters, as highlighted in the third section of the book. After the collapse of Lehman Brothers, central banks in major advanced economies adopted a number of extraordinary measures to support liquidity and lowered official interest rates to near zero in early 2009. At the same time, they also began implementing so-called unconventional policy measures with the aim of restoring the monetary transmission mechanism, improving access to finance and supporting the sluggish recovery. Fiscal consolidation efforts initiated in 2010 left monetary policy as the “only game in town”.

The persistence of low inflation rates in spite of the highly accommodative monetary policy stance represents a major challenge for central banks in the main advanced economies. The chapter by Berganza, F. Borrallo, and P. del Río shows that the persistence of inflation and the increased importance of backward-looking inflation expectations in some countries may pose risks for inflation-expectation anchoring and central bank credibility.

There is ample evidence that real interest rates have progressively declined since the 1980s in most advanced and emerging economies, and currently stand at very low levels (Figure 3). The persistence of this trend, as well as its intensification during the GFC, calls for a deeper investigation on their driving factors as well as on their potential implications, both for the conduct of monetary policy and for financial stability. In this context, I. Hernando, D. Santabárbara and J. Vallés argue that the normalization of monetary policies, the change in the growth model of some emerging countries and the socio-demographic and productivity trends would point to a gradual recovery in real interest rates, over a medium-term horizon, albeit with a high degree of uncertainty, both as regards the magnitude of the rise and its timing. Over the longer term, this trend may tail off in a context of limited technological progress, which fails to boost investment, or if investment growth in the emerging economies declines more sharply than expected. 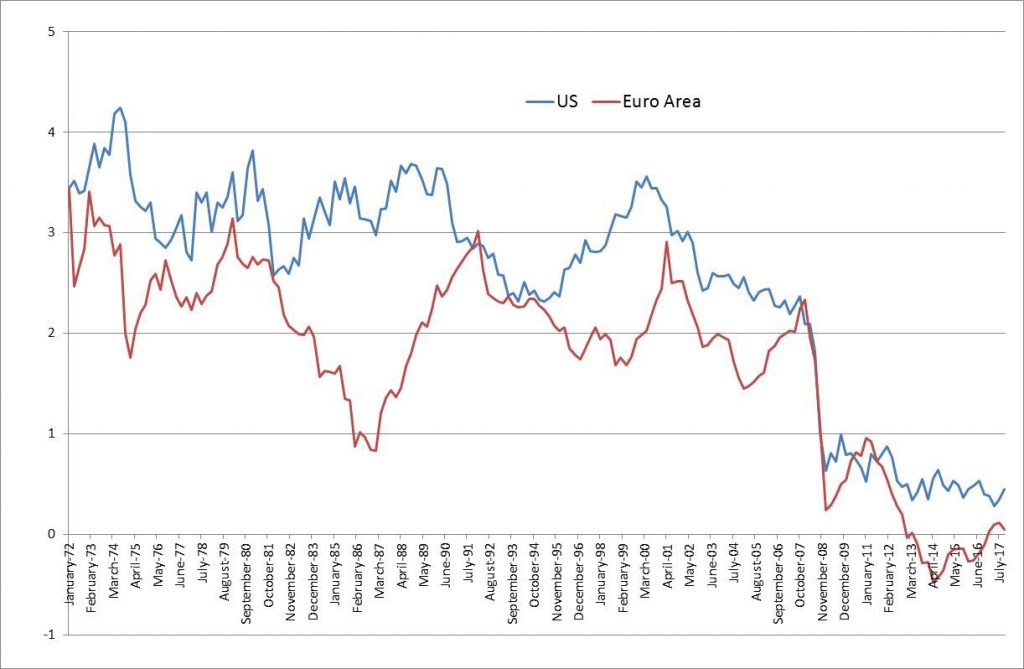 Figure 3: Natural interest rates in the U.S and the euro area (in %). Source: Holston, Laubach and Williams, 2016.

Another feature of the global economic landscape in the last few years is the substantial increase in uncertainty, with significant implications for the conduct of macroeconomic policies. These uncertainty shocks stem mainly from developments in financial systems in some parts of the world and from political and economic policy outcomes. L. Ferrara, S. Lhuissier and F. Tripier present and discuss several measures of uncertainty that have been put forward in the literature, now widely used in empirical analyses, and describe the theoretical channels of transmission of uncertainty on macroeconomic activity and financial markets. Implications of higher uncertainty for the conduct of macroeconomic policies are of major importance.

In section 4, we come back on major disruptions in countries’ external sectors generated by the GFC. The large drop in global trade, slump in economic activity and turmoil on financial markets, as well as the subsequent economic policy reactions, all generated large movements in external variables such as capital flows and exchange rates.

We observed wide fluctuations in portfolio flows, banking flows and foreign direct investments before, during and after the GFC. M. Bussière, J. Schmidt and N. Valla show evidence of some stylized facts in international financial flows around the GFC, based on an empirical analysis of a large set of advanced and emerging countries. What are the drivers of those movements in capital flows? There have been some tentative explanations, especially regarding the collapse in banking flows. Among the possible drivers, the role of risk aversion and the high level of uncertainty have been put forward, but the correction from a pre-crisis global banking glut, the intensification of the disintermediation process or the impact of the trade collapse on trade credits are also convincing arguments. Against this backdrop, it is crucial to understand to what extent unconventional monetary policies have sustained capital flows. A. Ciarlone and A. Colabella look at the effects of the ECB’s asset purchase programs (APPs) on the financial markets of a set of central, eastern and south-eastern European (CESEE) countries. They show that the implementation of the APPs helped to support cross-border portfolio investment flows to, and larger foreign bank claims on, mainly through a portfolio rebalancing and a banking liquidity transmission channel.

Finally, as argued in the open economy literature, there is a close relationship between exchange rates, capital flows and monetary policy. S. Haincourt shows that a currency appreciation driven by a fall in risk premia is likely to have less adverse effects on GDP and inflation than one driven by a monetary policy shock. In addition, comparing the United States and the euro area, model-based results show that the euro area is more sensitive to a currency appreciation, most likely because of its higher degree of openness.

23 thoughts on “Guest Contribution: “International Macroeconomics in the wake of the Global Financial Crisis””