I’ve written up a draft set of notes for my undergraduate macro students. Here is my interpretation of Modern Monetary Theory for them. Comments welcome.  [Revised version incorporating comments now available here (3/26).]

This post is for those who are unable to read an entire completely verbal exposition regarding Modern Monetary Theory (MMT). MMT has been the source of some debate recently. Instead of critiquing the literature, I attempt to illustrate the approaches for “paleo-Keynesians” relying on Wray (2011), Bell (1998), and the interpretations by mainstream macroeconomists Rowe (2011).

The main components of MMT are:

These components can be interpreted in the IS-LM AD-AS framework thus:

This combination is illustrated in Figure 1; output is initially at Y0 < Yn, i.e., the economy is experiencing a negative output gap. However, there is no self-correcting mechanism in this economy, as the price level is fixed. 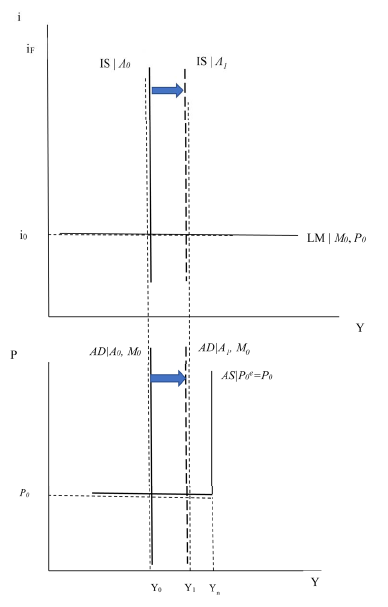 Fiscal policy can shrink the negative output gap, without consequence. An increase in government spending shifts the IS and AD curves out horizontally (blue arrow). There is no crowding out of investment, given (i) the LM curve is horizontal, and (ii) in any case investment is interest insensitive.

Monetary policy is completely ineffective given no exogenous monetary policy is possible (high powered money only increases with government spending). Should interest rates tend to increase for some reason, the central bank-treasury composite will target the interest rate, using open market operations.

A slightly more complicated outcome results if aggregate demand is increased so as to set Y = Yn. This is shown in Figure 2. Figure 2: Expansionary fiscal policy, where final output is at Yn.

A slightly different result occurs if the AS curve is upward sloping. Incorporating a standard AS curve (as in Blanchard, 2018), where supply equals Yn such that P0=Pe0, one obtains Figure 3. 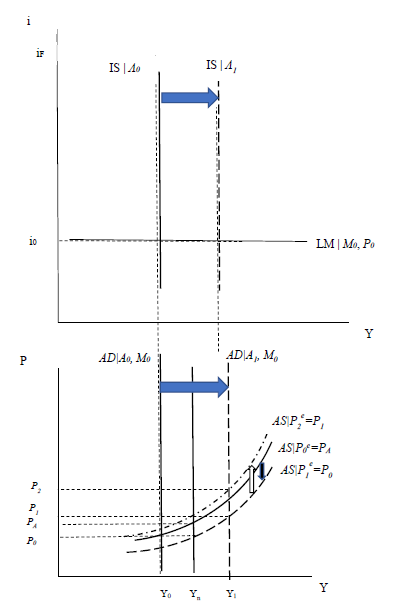 In order to analyze the evolution of macro variables, one needs to define the way in which price expectations are formed. For simplicity, I assume the current expected price level (P) is set to the previous period’s price level, viz.:

Assuming this price expectations scheme, one can trace out the economy’s dynamics. Output begins below Yn. In period 1, government spending increases shifting out the AD and IS curves (blue arrows). The deficient aggregate demand in period 0 results in a downward shift of the AS curve (black arrow). Output rises to Y1.

The preceding discussion highlights the fact that the government faces no financing constraint, although its actions are circumscribed by a resource constraint (the vertical AS curve). Since government spending injects money base (MB), the greater the amount of government spending, the more accommodative monetary policy is. In an equation:

Which is the standard government budget constraint, with T is tax revenue net of transfers and G is government spending on goods and services. The government will always be able to sell bonds; if not, the central bank will necessarily buy the bonds[1]

Money base is demanded elastically because of the requirement that taxes be paid in the national currency (sufficient but not necessary condition). Reductions in quantity demanded are absent since inflation is ruled out (because it is assumed that the government will keep output below Yn).

[1] “[I]n that extreme case where nobody wants to buy bonds from the Treasury, the central bank will intervene, or the Treasury will finds ways to avoid having no funds in their coffers. They have done so for centuries now due to their privilege in the monetary system. They have done so not only to finance Treasury but also to avoid financial instability that results from a federal government that does not perform its monetary duties properly.” Tymoigne and Wray (2013: 27).