Or more correctly, in Mr. Trump. As reported by Bloomberg, Mr. Trump has said:

I think Mr. Trump is partly himself to blame for the strength of the dollar. To show this, I estimate the following relationship over 2014Q1-18Q3, with r the log real trade weighted value of the US dollar, EPU world economic policy uncertainty as measured by Baker, Bloom and Davis, y is log real GDP, i  is the policy rate (shadow Fed funds for US), and “RoAdv” denotes rest-of-advanced economies.

Using these estimates, I can decompose the movement in the real US dollar since 2014Q1. 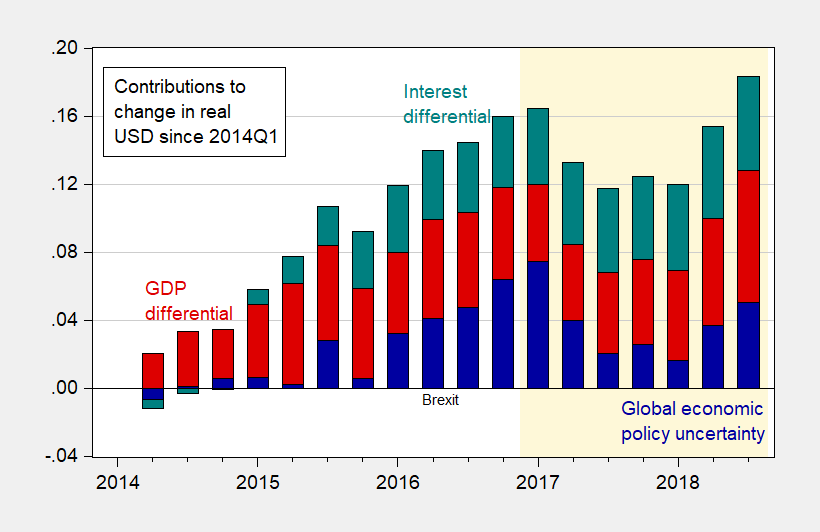 Notice that the Brexit induced a substantial increase in the dollar’s strength. But since the election of Mr. Trump, a substantial share of the increase in the dollar’s value has come from the growth differential in favor of the US (of which at least some comes from the TCJA and the relaxation of spending restrictions in the budget bill), and since 2018Q2 — with elevated global economic policy uncertainty. As I’ve noted elsewhere, this event has coincided with an elevation of US trade policy uncertainty, as measured by the BBD categorical index for this category. Here, Mr. Trump has only himself to blame.

Hence, we can say that at least some of the dollar’s strength is due to Mr. Trump’s own actions.

47 thoughts on “The Fault Is … in Ourselves”