The Coalition for a Prosperous America publishes another study imbued with “secret sauce” structure…From the “working paper” (more akin to a press release):

Specifically, we introduce the effects of Chinese retaliation with tariffs on US exports to China; we add the effects of the US Department of Agriculture’s (USDA) programs to support farmers and food processors negatively affected by Chinese retaliation; and, we add the impact of the US government spending the revenue generated by the China  tariffs. We find that Chinese retaliation reduces the benefit to the US economy by 14 percent, but the net benefit remains large. The USDA programs provide relief to the agricultural industry and restore the net benefit to almost the same level as before the retaliation. Finally, we look at the impact of the government reinvesting the tariff revenue in the US economy by boosting government spending…

I’ve read the “working paper” (and the preceding paper) a couple of times, and am not clear what is going on — the results are based on splicing two models (REMI and BCG data) and running out the results.

Alarm bells went off in my head when I read this:

“Our forecast results differ from many others because ours incorporate more real-world evidence than other forecasts, which tend to rely excessively on unrealistic assumptions based on neoclassical economics. For example, forecasters who have found that tariffs depress US GDP often assume that all or most of the tariff price is passed onto consumers, and that spending on these goods falls substantially as a result of price increases. These assumptions are unwarranted, noting the evidence from the tariffs of 2018-2019, where we have seen minimal price increases from Section 201 and China tariffs.”

This is counter to the most recent research on the subject. From Amiti et al. (2019), an empirical finding:

This paper explores the impacts of the Trump administration’s trade policy on prices and welfare. Over the course of 2018, the U.S. experienced substantial increases in the prices of intermediates and final goods, dramatic changes to its supply-chain network, reductions in availability of imported varieties, and complete passthrough of the tariffs into domestic prices of imported goods. Overall, using standard economic methods, we find that the full incidence of the tariff falls on domestic consumers, with a reduction in U.S. real income of $1.4 billion per month by the end of 2018. We also see similar patterns for foreign countries who have retaliated against the U.S., which indicates  that the trade war also reduced real income for other countries.

If you are skeptical, a graph of the data on goods subject to the different waves of tariffs is useful. From Amiti et al. 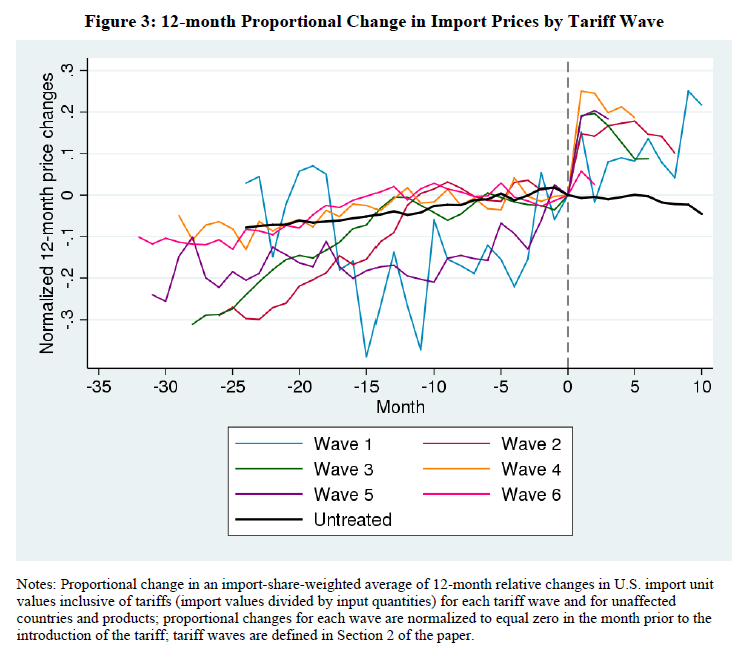 In addition, the variety of goods declined. 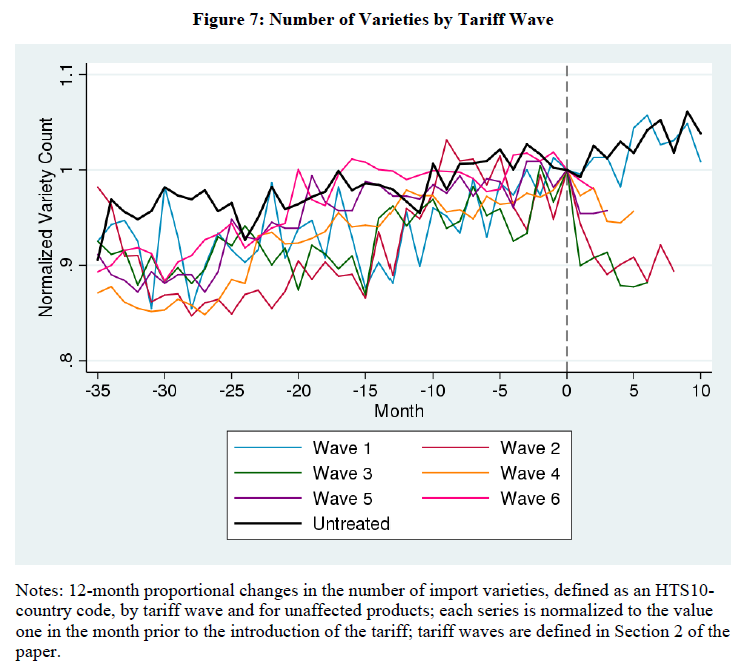 If the authors of the CPA study can’t even get the stylized facts right, what hope is there for reasoned analysis?

I will also note that this comment in the CPA working paper (page 5) does not engender confidence:

Our forecast results differ from many others because ours incorporate more real-world evidence than other forecasts, which tend to rely excessively on unrealistic assumptions based on neoclassical economics. For example, forecasters who have found that tariffs depress US GDP often assume that all or most of the tariff price is passed onto consumers…

It seems a lot of the results are driven by (1) government financial support for farmers impacted by Chinese tariffs on US goods, (2) Chinese tariffs on US goods have a relatively small effect, and (3) that the tariff revenue (nearly half a trillion over 5 years!) is spent on infrastructure (which has a high multiplier in most models, presumably also in the REMI model as well). Of course, this works if the US tariffs have a terms of trade effect so that we get Chinese goods (ex-tariffs) more cheaply. As the Amiti et al. paper has documented, that hasn’t happened yet.

On top of the Coalition for a Prosperous America’s crazy currency misalignment paper, it’s clear to me that the group’s studies are mere propaganda.