In previous posts [1] [2], I described how in data up to the beginning of 2016, the Fama puzzle was overturned for major currencies. One question was whether the change would persist post-crisis and post-Zero Lower Bound (ZLB) exit. The short answer is, so far, yes.

This is shown using data from a forthcoming paper w/Jeffrey Frankel (earlier version here), where we demonstrate that the reversal of the Fama regression coefficient holds, including when using forward rate data instead of interest rate data.  First, consider the Fama regression: 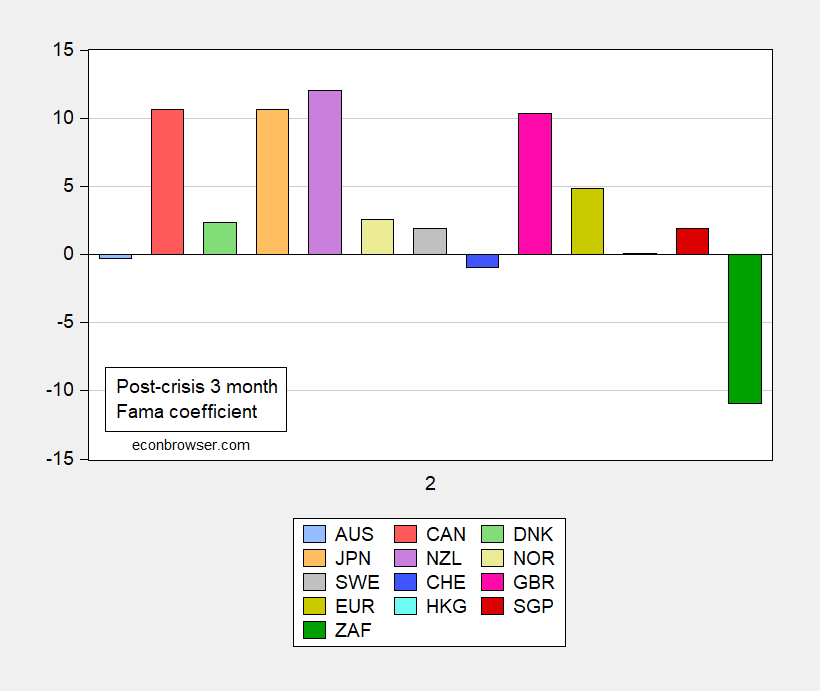 These results are robust to starting the post-crisis sample in 2010.

The key finding here, as in Bussiere, Chinn, Ferrara and Heipertz (2018), is that before the crisis, the correlation between ex post depreciation and interest differentials for advanced economies is negative. After the crisis, and during the zero lower bound (ZLB) era, it is positive. There are two non-reversal currencies (which were not included in the BCFH paper): Singapore dollar and South African rand. Note that these are emerging market currencies, and we do not expect to see the same factors and behaviors (neither at or near ZLB).

Currently, I’m at the NBER Summer Institute. Two excellent papers presented this morning in the International Finance & Macro meetings link up with these results, directly (Kalemli-Ozcan and Varela) and indirectly (Lilley, Maggiore, Neiman, and Schreger). For the latter, the question asked in the session is whether the results will persist far into the future (when many interest rates are above the ZLB) is also germane to our results.

(Of course, given how things are going, maybe there’ll be a lot of currencies returning to ZLB…)