From the Highlights of a new CBO study:

Comparison With Other Forecasts. For the most part, CBO’s and the Administration’s forecasts exhibit similar degrees of centeredness, but CBO’s forecasts are slightly more accurate and have smaller two-thirds  spreads. For all three quality measures, CBO’s forecasts are roughly comparable to the Blue Chip consensus forecasts.

Sources of Forecast Errors. All forecasters failed to anticipate  certain key economic developments, resulting in significant forecast errors. The main sources of those errors are turning points in the business cycle, changes in labor productivity trends and crude oil prices, the persistent decline in interest rates, the decline in labor income as a share of gross domestic product, and data revisions.

The entire report is here (E. Gamber/A. Staveski). Don’t read and comment on it unless you understand mean error, root mean squared error, and the concept of an inter-quartile range (which encompasses 50% of sample, as opposed to th 67% used in this study). 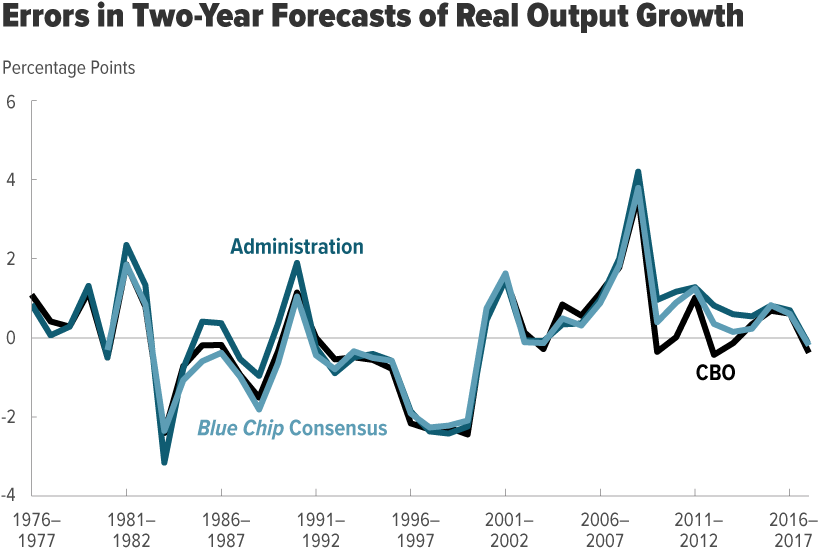 This is forecast minus actual. Notice that both forecasters and consensus forecast did not foresee the Great Recession, while CBO was on average less optimistic than either OMB or Blue Chip consensus in the immediate recovery years.

There is an interesting comparison of CBO (current law) and Fed modal (conditional) forecast errors in a box on page 14. Here is the graph for real GDP growth forecasts errors (dots denote periods of forecasts overlapping recessions).

Notes: The measure of real output is gross national product in years before 1992 and gross domestic product in 1992 and later years. Positive errors represent overestimates. The dots shown on the horizontal axis indicate that the forecast period overlapped a recession by six months or more. The years indicate the time span covered by each of the forecast errors shown in the figure.