Today, we are pleased to present a guest contribution written by Jian Wang (Chinese University of Hong Kong – Shenzhen) and Jason Wu (Hong Kong Monetary Authority). All views are those of the authors and do not necessarily reflect the views of HKMA.

Following the 2008 global financial crisis, countercyclical capital flow management policy has been recommended, especially for emerging economies, as a way to defend against financial instability and to preserve monetary autonomy. Rey (2013) shows that over the global financial cycles, shocks emanating from “center economies” such as the U.S. induce large and volatile international capital flows and prevent the conduct of independent monetary policy for countries with open capital markets, even if they have flexible exchange rate arrangements. IMF (2011) argues that volatile capital flows may carry macroeconomic and financial stability risks to receiving countries, and measures to manage capital flows can help mitigate these risks. These arguments echoed early voices in the 1990s that capital control policies should be adopted in the countries for which currencies were still pegged to the U.S. dollar or whose domestic financial markets remained underdeveloped.

As a practical matter, however, it is not clear if countries follow this policy recommendation and if policies effectively shield an economy from volatile international capital inflows and outflows. For instance, Fernandez et al. (2015) find that capital controls in 78 countries are acyclical over the period 1995-2011. The empirical support for the effectiveness of capital flow management policy is also at best mixed.[1]

In a recent paper, we contribute to the literature by providing empirical evidence that emerging market economies (EMEs) tend to adopt countercyclical capital flow management in response to U.S. monetary shocks. Using these shocks as exogenous instruments, we further show that the actions to manage capital flows are indeed effective in altering portfolio flows, which help justify their use. 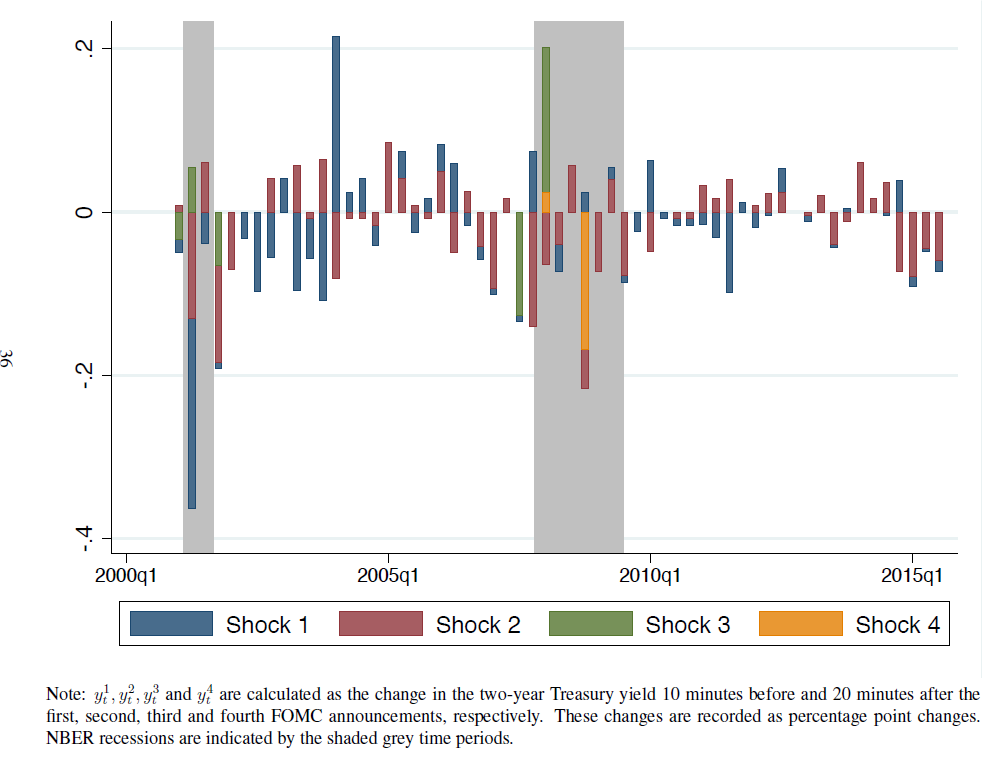 For a panel of 15 EMEs, we first regress the number of “net-net” capital flow management actions—notated as NNIKR—in quarter t on these shocks ( and ) in quarter t-1 and other pre-determined variables.[3] We show that for the average EME, a “dovish” (“hawkish”) U.S. monetary policy shock of one percentage point results in a 1.7 standard deviation increase (decline) in the “net-net” number of capital inflow reducing actions in the following quarter (see the table below). 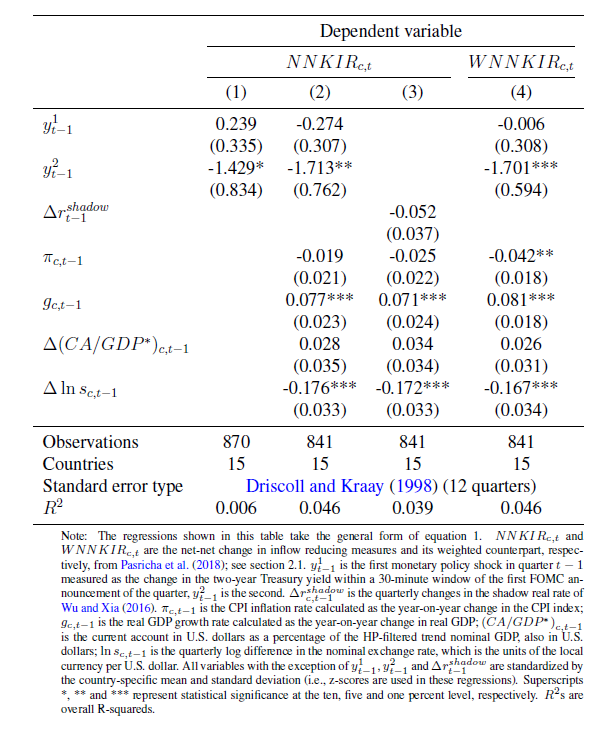 We then include U.S. monetary policy shocks as instruments in a panel generalized method of moments (GMM) framework where the dependent variable measures portfolio flows into and out of the 15 EMEs in quarter t+1. The estimated causal effect in our baseline specification suggests that a one standard deviation increase in the “net-net” number of inflow reducing actions in quarter t, which is in response to a dovish U.S. monetary policy shock in quarter t-1, causes a two-fifths of a standard deviation decline in “net-net” portfolio inflows—notated as —in the next quarter t+1 (see the table below). This estimate is robust to various alternative specifications. 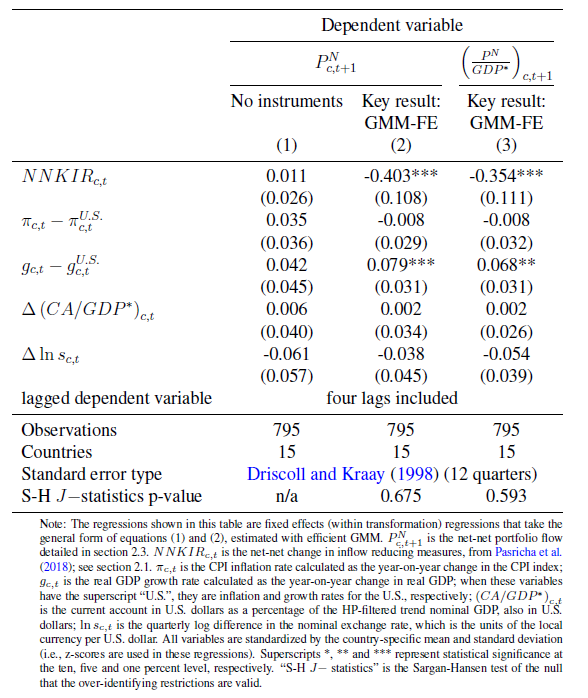 Delving into the drivers behind our results, we document a couple of interesting asymmetries. The first is that our key result is driven by the effectiveness of net inflow tightening actions applied on non-residents in altering net portfolio inflows from abroad, whereas we could not find evidence that net outflow easing actions applied on residents react to U.S. monetary policy shocks.[4] Focusing on the role of net inflow tightening actions applied on non-residents, a second asymmetry we find resonates with the “2.5-lemma” paradigm of Han and Wei (2018) — EMEs tend to take actions to stem inflows when the U.S. eases monetary policy and these actions are indeed effective in doing so, whereas there is no statistically significant evidence that actions are taken when the U.S. tightens monetary policy. This finding suggests that capital flow management policies may be preemptive: if the policy succeeds fending off the capital inflows driven by the easing policy in the U.S., EMEs that adopt the policy may face less pressure to stabilize their financial markets when the U.S. reverses its monetary policy. For instance, Ostry et al. (2012) find that during the global financial crisis, economies with stronger pre-crisis capital controls or foreign exchange-related prudential measures were in general more resilient.

It is important to clarify the issues that this paper does not address. Although we provide empirical evidence that capital flow management in EMEs react to U.S. monetary policy shocks and that the actions alter portfolio flows, our empirical results do not say anything about which types of capital controls are optimal under what circumstances, nor anything about the practical implementation challenges associated with using capital flows management—such as complexity, credibility, and coordination with other policies, as stipulated by Mendoza (2016) in the broader context of macroprudential policies. As well, our study does not assess the costs of capital controls, such as a loss in financial market efficiency and an increase in risks related to say shadow banking activities. Finally, our empirical framework does not directly test if the use of capital controls improves a country’s monetary policy autonomy, which is the subject of Han and Wei (2018) and Aizenman et al. (2017).

[1] For instance, Edison and Reinhart (2001) find that capital controls failed to stop hot money in two out of three emerging markets during the crises of the 1990s. More recently, Forbes et al. (2015) find that most capital control measures do not significantly affect capital flows and other key targets in an expansive but short panel of countries. Other recent examples of negative or mixed findings include Klein (2012), Forbes et al. (2016) and Chamon and Garcia (2016). In contrast, Ostry et al. (2012) and Ben Zeev (2017) document empirical evidence in favor of capital flow management policies, especially for emerging markets.

[2] In a robustness check, we also include the shocks extracted from 10-year Treasury yields to capture monetary policy shocks to long-term interest rates.

[3] This measure is “net-net” as it firsts nets tightening and easing measures separately for inflows and outflows, and then nets across net inflow measures and net outflow measures. See Parischa et al. (2018) for a more precise definition.

[4] In a related study, Ben Zeev (2017) finds that capital inflow controls help to stabilize a country’s output—rather than capital flows—in response to global credit supply shocks, while no such evidence exists for capital outflow controls.

This post written by Jian Wang and Jason Wu.