Today we are fortunate to present a guest post written by Michele Ca’ Zorzi (ECB), Adam Cap (BIS), Andrej Mijakovic (European University Institute) and Michal Rubaszek (SGH Warsaw School of Economics). The views expressed in this paper are those of the authors and not necessarily those of the institutions they are affiliated with.

A negative slope indicates that exchange rates partly absorb the initial exchange rate gaps. At the one-quarter horizon the slope is almost flat for all three models. At longer horizons, however, for the PPP and BEER models the dots gradually align along the diagonal, suggesting a nearly perfect adjustment towards equilibrium. Equilibrium exchange rates calculated with these two methods have, in other words, predictive power. In the case of the MB model the dots do not show any tendency to align along the diagonal, implying that exchange rates do not converge to their estimated equilibrium values. 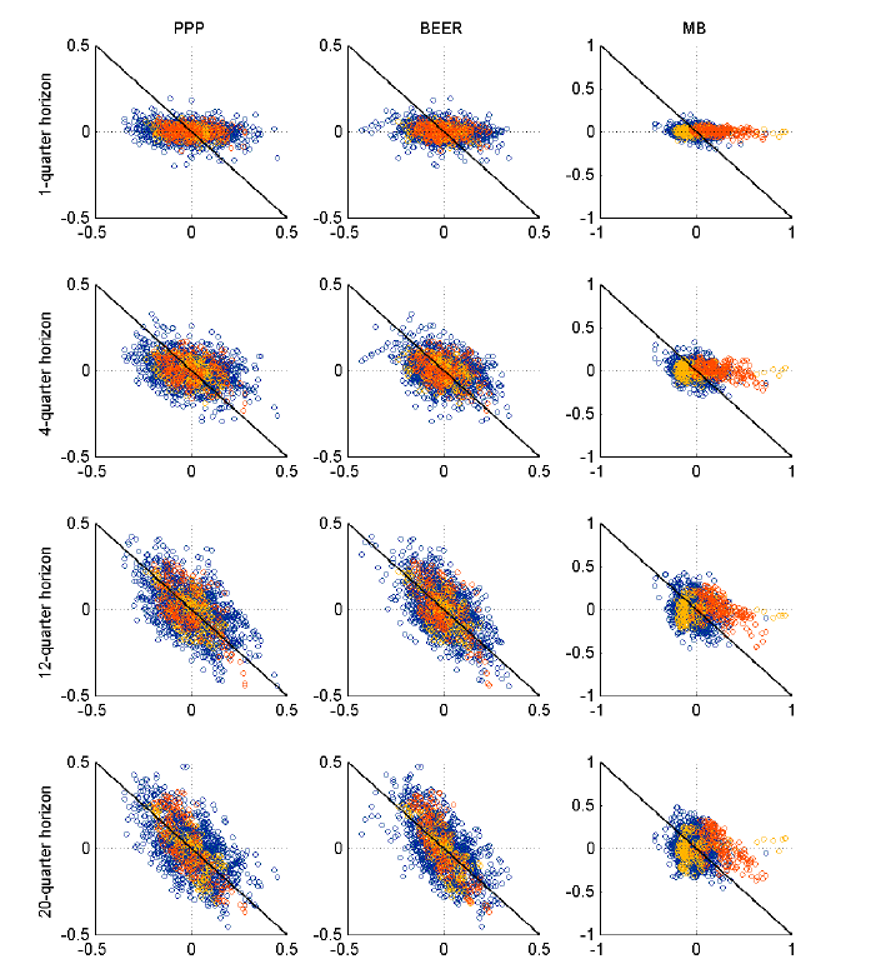 Notes: The x-axis of the figure represents deviations of real effective exchange rates from their full-sample equilibrium, whereas the y-axis represents subsequent real effective exchange rate adjustments. USD and EUR are marked with red and yellow dots, respectively, while the blue dots denote the remaining eight currencies in the sample. The diagonal line represents perfect adjustment to equilibrium over the respective horizon.

In the paper, we then switch to a fully-fledged forecasting competition. For each model, , currency  and vintage of data , we generate a path of forecasts for horizons  using panel regressions:

In this notation  denotes the equilibrium exchange rate at time  calculated using model , whereas  and  denote adjustment parameters, all values estimated with sample . Given that  is progressively moved forward between 1994Q4 and 2018Q3, this gives us 96 forecasting trajectories up to 20 quarters ahead for each currency . In Figure 2 we show the results for the euro and US dollar. For these two currencies the forecasts generated with the PPP and BEER models are similar and much more accurate than those derived with the MB approach. 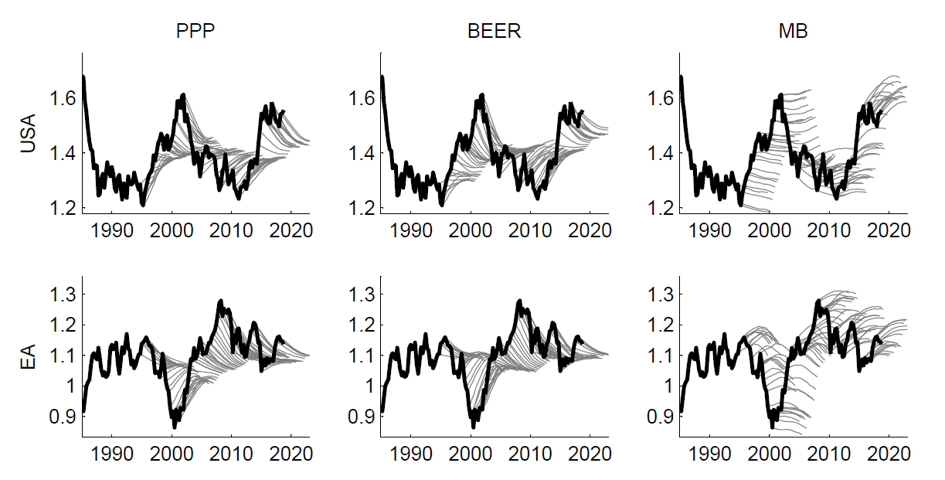 Notes: Values are expressed as the logs of the real effective exchange rates.

Table 1 presents a more formal evaluation of forecast accuracy by reporting the root mean squared forecast error of the three models relative to the random walk (RW) benchmark. The results show that the PPP model performs generally well. At long horizons it significantly outperforms the RW for six countries (CAN, EA, GBR, JPN, NOR and USA). In three other cases the performance is almost identical (AUS, CHE and NZL) while in one case only PPP is beaten by the RW (SWE). The BEER model is almost as competitive as PPP, but not systematically better; the attempt to capture the role of economic fundamentals has a mixed impact on forecasting performance depending on the country. The table also reveals that the MB model is outperformed by the RW six times out of ten. For the United States and the euro area, the predictive power of the MB model is much worse than that of the PPP or BEER models. Paradoxically, the MB model performs slightly better out-of-sample than in-sample. The reason is that the empirical model only detects a very slow pace of adjustment toward equilibrium, i.e. the estimates of the adjustment coefficient  from eq. (1) are close to zero. Forecasts generated with the MB model hence tend to be closer to the RW than those generated by the other two models. 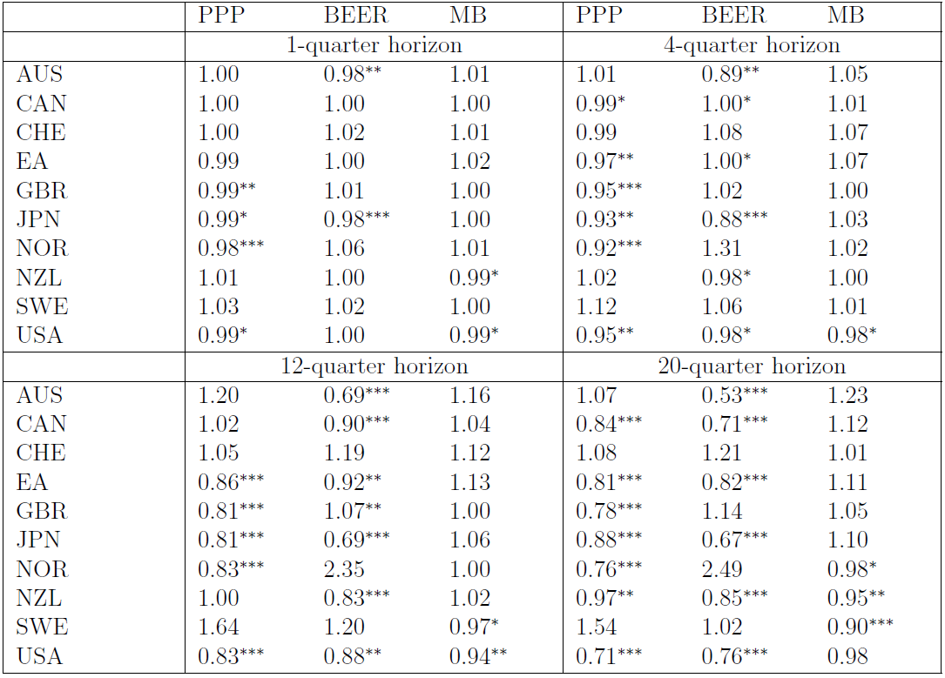 Notes: The table shows the ratios of the RMSFE from a given model in comparison to the random walk benchmark so that values below unity indicate that forecasts from the model are more accurate than the benchmark. Asterisks ***, ** and * denote, respectively, the 1%, 5% and 10% significance levels of the Clark-West test, where the long-run variance is calculated with the Newey-West method.

The key insight of our paper is the presence of a trade-off between storytelling and predictability of equilibrium exchange rates. In terms of economic intuition, the PPP model offers little else but the notion that real exchange rates are mean reverting.[1] The BEER model looks more promising from an in-sample perspective, as it links the evolution of real exchange rates to that of economic fundamentals. The MB is the most appealing approach from a storytelling perspective, as it requires a definition of what constitutes an external imbalance and a clear hypothesis on how exchange rates affect trade volumes and prices and hence of the current account adjustment process. In terms of predictive power however, our model ranking flips. The PPP model produces the simplest and most reliable real exchange rate forecasts, closely followed by the BEER. The MB model performs poorly, not only in-sample but also out-of-sample, despite the fact that it tends to mimic the RW.

MacDonald, R., 1998. What determines real exchange rates?: The long and the short of it. Journal of International Financial Markets, Institutions and Money 8 (2), 117-153.

[1] We have explored elsewhere how the mean reverting property of real exchange rates can also be exploited to forecast nominal exchange rates (Ca’ Zorzi and Rubaszek, 2020), see also the Econbrowser version (link).