Today we are pleased to present a guest contribution written by Hongyi Chen, Senior Advisor at the Hong Kong Institute for Monetary and Financial Research, and Pierre Siklos, Professor of Economics at Wilfrid Laurier University.

There is a long tradition in economics suggesting that each country’s economic policies should be governed by the motto: “keep your own house in order”. For example, the textbook depiction of a flexible exchange rate is that it acts as an absorber of external shocks thereby allowing each country to independently set monetary policy. Indeed, this can explain why small open economies such as Canada have supported floating exchange rates the longest.  However, even policy makers in Canada have recognized for some time that exchange rate shocks produce distinct effects on goods markets than in financial markets (Dodge 2005).

Of course, the extent to which international linkages are tight or loose may be critical but, under certain assumptions, Obstfeld and Rogoff (2002) demonstrated that the gains from monetary policy coordination are small. More recently, it is the revival of interest in differential monetary policy conditions (e.g., see Howorth et. al. 2019), prompted in large part by the finding that the neutral real interest rate has fallen in large and systematically important economies (e.g., U.S., Eurozone, U.K., and Japan; see Holston, Laubach and Williams 2017), that has led to renewed interest in the policy coordination question. Clarida (2018) argues that, if the decline is truly global and policy rates are partly set according to ones in foreign economies, substantial economic benefits from coordination might accrue. But there are potential negatives to policy coordination in the form of potential losses in central bank credibility and new challenges to central bank communication (e.g., see Bordo and Siklos 2016).

In “Oceans Apart? China and Other Systemically Important Economies” we explore the extent to which the G4, which consists of the US, the Eurozone, Japan, and includes China, as a block contributes to global economic performance. Panel factor vector autoregressions (VARs) are used because these seem well suited to exploit cross-border links and assess the relative impact of domestic and global factors. We find that domestic and global shocks can reinforce each other. Next, we conclude it is essential not to treat China as an exogenous entity in global macro models if we are to better understand how shocks can interact with each other in the G4. For example, a tightening of domestic monetary conditions results in a global deterioration in real economic conditions because spillovers can reinforce the tightening among the systemically important economies. This same shock also leads to global tightening of financial conditions. Indeed, almost 60% of the variability of the global monetary shock can be explained by shocks in a global commodity factor and real economic factor. However, the findings are more muted when shocks from China are treated as exogenous. We conclude, at least empirically and for the sample considered, that there are net benefits from greater policy coordination.

How do we reach this conclusion? A couple of examples from the paper are used to illustrate the point. Readers are asked to look at the paper for additional calculations and estimation details.

Two figures below show factor scores for the G4 estimated using two different approaches, namely based on the full sample and using a time-varying method. The first figure shows the results for the real economy. A higher value is akin to an expansion in economic activity; a lower value represents, of course, the opposite. Whether full sample or time-varying estimates are used the message is broadly the same. There is considerable commonality in real economic conditions in the four economies. 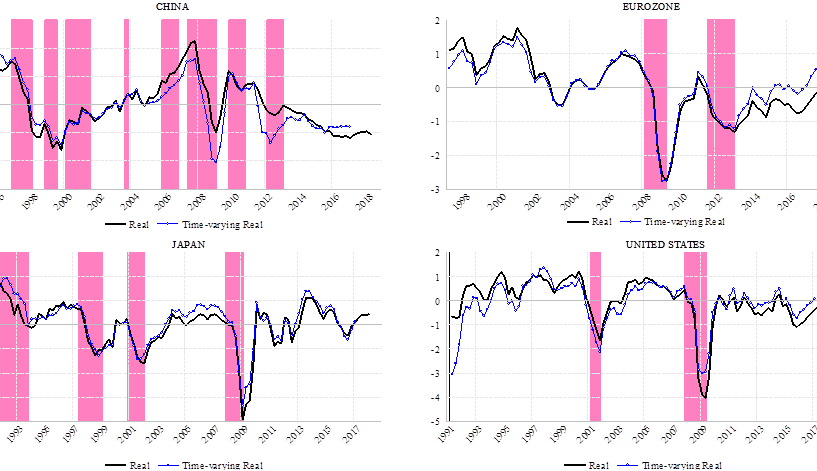 Figure 1 Real Economic Conditions (i.e., Factor) in the G4. The shaded areas indicate recessions as estimated by the NBER (US), the JCER (Japan), the CEPR (Eurozone), and growth slowdowns in China (ECRI). 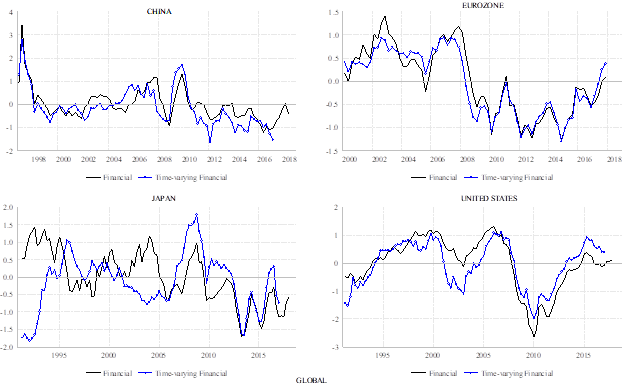 When we add other factors (a monetary and a commodity factor), not to mention examining the difference between the case where shocks from China are exogenous versus a model where shocks from China are endogenously related to the rest of the G4, the picture that emerges from the panel VAR estimates is that spillovers, especially the global component of shocks, amplify domestic shocks. Incorporating a role for commodity prices and financial conditions also raises the relative importance of the global component of shocks when China is treated as a systematically important economy. The finding that China, when treated as part of the ‘club’ of systemically important economies, amplifies the impact of various shocks, notably real and financial shocks, is perhaps not surprising. However, differences from the impulse responses obtained when China is viewed as contributing only exogenously to the interactions between real, financial, and monetary shocks among the U.S., Japan, and the Eurozone suggest that transmission mechanisms in large economies have been significantly impacted by the rise of China as a global economic power.

Bordo, M., and P. Siklos (2016), “Central Bank Credibility: An Historical and Quantitative Exploration”, In Central Banks at a Crossroads: What Can We Learn From History? Edited by M.D. Bordo, Ø. Eitrheim and M. Flandreau (Cambridge, Mass.: Cambridge University Press), pp. 62-144.

Dodge, D. (2005), “Monetary Policy and Exchange Rate Movements”, remarks by the Governor to the Vancouver Board of Trade, 17 February, available from www.bankofcanada.ca.

This text written by Hongyi Chen and Pierre Siklos.