The Empirical Failure of UIP

Despite the fact that the uncovered interest rate parity (UIP) hypothesis plays a key role in model building and related analytical work in theoretical international economics, its empirical applicability has been seriously challenged. The Fama β-estimate (henceforth, the “β-estimate”) – the estimate of the cross-country interest rate differential coefficient – is commonly found to deviate from the value of one predicted under UIP, and is even negative in some instances.

Studies have noted that omitted variable bias can be a source of the empirical failure of UIP. Specifically, the canonical bivariate UIP regression should be augmented to, say,

In a recent study (Cheung and Wang, 2020), we assess the empirical relevance of UIP with an empirical framework that allows for non-uniform effects due to model uncertainty and time-varying parameters. Technically, the Bayesian dynamic linear model (DLM) approach is used to accommodate time-varying parameters. And, a data-driven modified dynamic model averaging (DMA) procedure is used to assess the relevance of the empirical proxy variables and, hence, address model uncertainty.

Our empirical exercise indicates that the (augmented) UIP regression is subject to both time-varying parameters and model uncertainty – hence the set of relevant explanatory variables can change over time. We use the New Zealand dollar (NZD) case to illustrate some empirical findings. 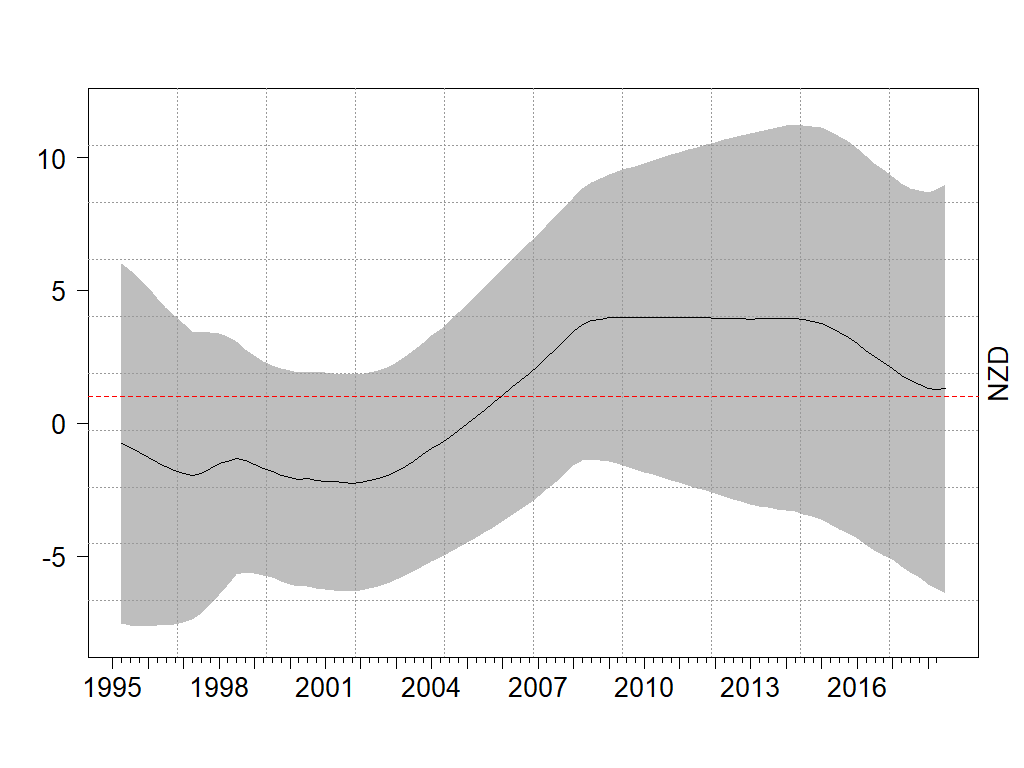 First, the UIP relationship, as indicated by the β-estimate, is time-varying. Figure 1 shows β-estimates (solid line; the dash horizon line is the 1-horizon line.) from the NZD bivariate DLM regression. The 95% credible region (gray area) is quite wide and makes it impossible to infer a precise value of β. Also, the β-estimate around the GFC turns to positive from negative (also, see Bussiere et al., 2018). 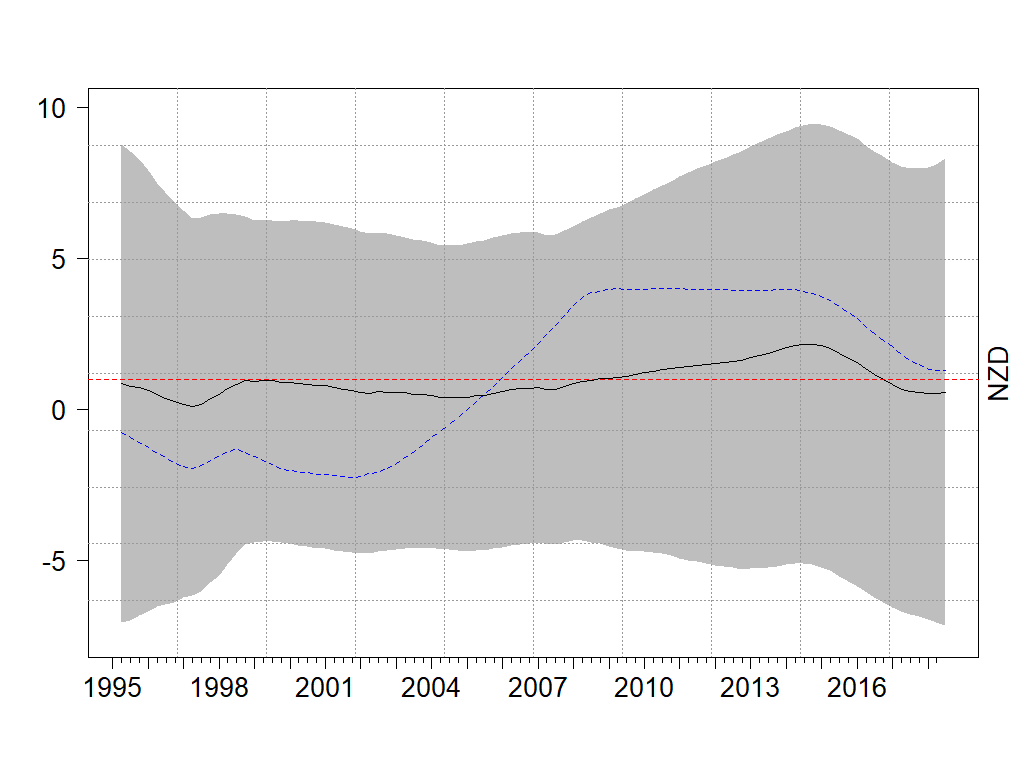 Second, our results show that the inclusion of these proxies to the canonical bivariate UIP regression can yield a β-estimate closer to the value of one predicted under UIP. Figure 2 shows that, in the presence of selected proxy variables, β-estimates are closer to the horizontal line of one than those from the bivariate specification. 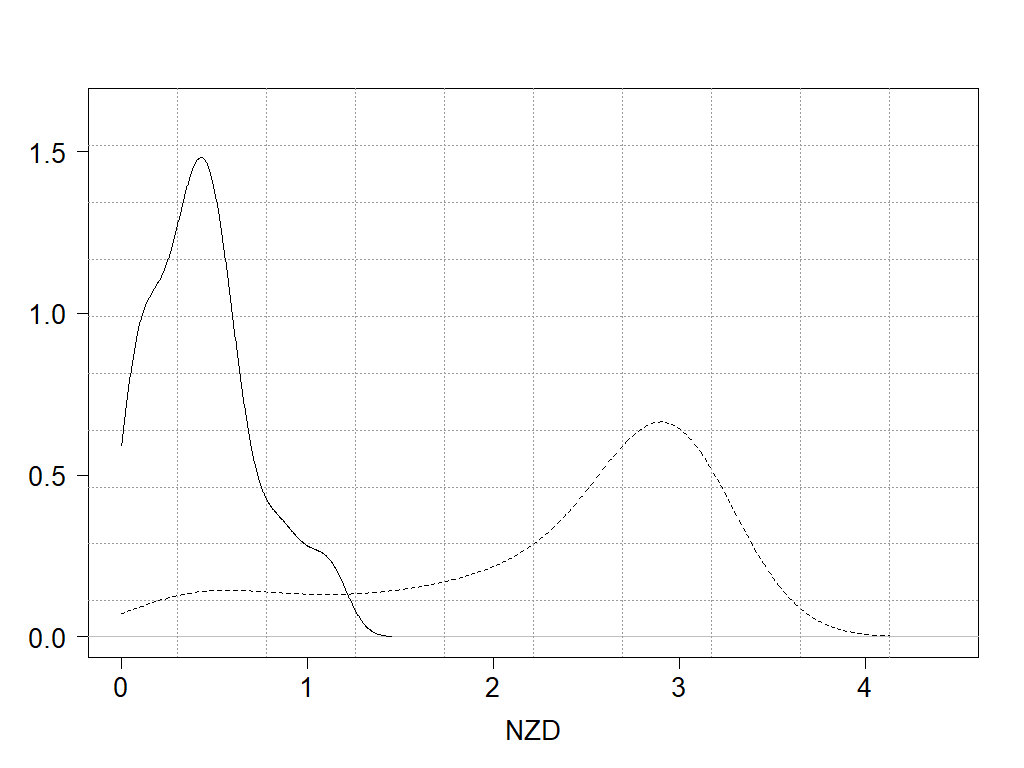 Figure 3. The Empirical Density Distributions of absolute differences from one – NZD

Figure 3 that plots the two empirical density functions of the absolute values of (β-estimate -1) of these two cases re-enforces the result. The presence of selected proxy variables moves the mass of absolute deviation from the theoretical value of one towards zero.

However, it should be pointed out that, while the presence of proxies reduces the deviation of the β-estimate from one, it does not reduce its sampling uncertainty.

Third, the set of proxy variables that alleviates the degree of UIP failure is not the same for all exchange rates under consideration. Further, both its composition, and the effects of its components can display wide variability over time. 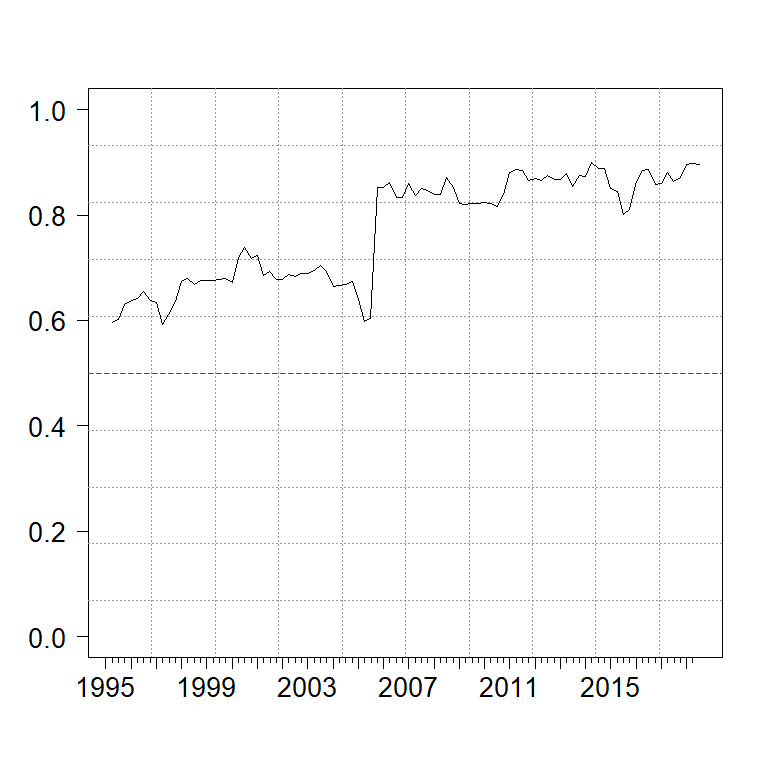 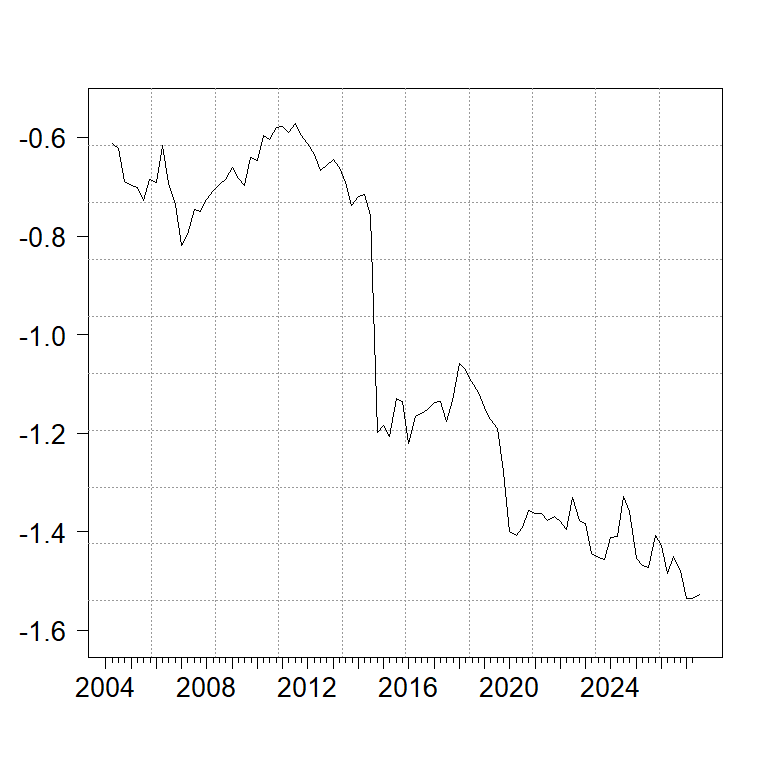 The time variability of the coefficient estimate of this variable is depicted in Figure 5.

These findings corroborate the scapegoat theory that refers to shifting roles of determinants in foreign exchange markets, and is suggestive of factors that affect the arbitrage behavior underlying the UIP condition can change over time and exhibit time-varying effects. It is conceivable that shifting roles and time-varying effects of proxies for unobservable factors due to, say, changes in market perceptions can contribute to the difficulty of rectifying the empirical UIP failure. Further, the exchange-rate specific results present challenges to developing a general explanation for the observed failure.

Undeniably, our exercise is mainly an empirical one that highlights non-uniform effects. One relevant issue that we revealed but offered no insight into is the finding that the β-estimate tends to change from negative to positive after GFC. Why the switch in the coefficient estimate? Some comment on the reduced interest in carry trade activity. Bussiere et al. (2018) notes there is a change in the correlation between expectational errors and interest differentials. Our exercise affirms both time-varying effects and shifting roles of individual factors. However, we provide no substantive economic interpretation.

Extra efforts are warranted for assessing the extent to which these empirical proxy variables capture the attributes of the unobserved factors relevant to the UIP discussion, the conditions under which these proxy variables are good empirical proxies, and the factors that determine their shifting roles. Nonetheless, an empirical model for explaining UIP failure is likely to be one that allows for both a time-varying set of explanatory variables and time-varying parameters.

This post is written by Yin-Wong Cheung and Wenhao Wang.