The dollar’s value has come under pressure recently. Does this mean the dollar’s role as a key international currency is at threat?

The short answer: not necessarily. 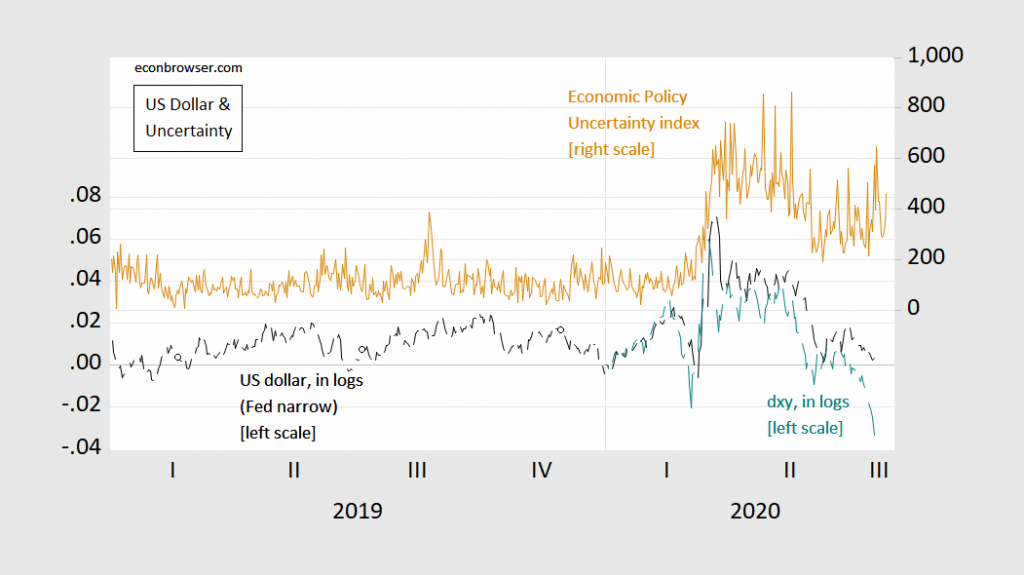 The value of the US dollar, like any exchange rate, is a function of macroeconomic fundamentals, like the money supply, the stock of government bonds, relative income, as well as risk appetite (risk aversion) and possibly uncertainty. For some empirical models, see this post (paper). Unlike some currencies, the dollar has a demand based on attributes like liquidity and low default risk for dollar denominated assets; these attributes make the dollar a safe-haven in many cases (like financial crises, but not necessarily geopolitical crises).

The dollar’s role as an international currency has been discussed here in a number of posts [1] [2]. Measurement suggests slight decline, or possibly increase, over the last two decades, depending on the approach (Ito-McCauley). Most of the empirically important factors do not vary much over time, certainly not usually at high (business cycle) frequencies: size of economy, level of financial development, secular inflation rates, and so forth (Chinn and Frankel 2007, 2008). In our papers, Frankel and I emphasized the euro could only come to dominate were the US to pursue incredibly disasterous policies that threatened inflation, open access to US markets, or induced political unrest; we found it difficult to conceive of any situation where we confronted all three in the trifecta. Of course, we did not anticipate a Trump administration.

In other words, these are not usual times, so anything goes. In particular, Frankel notes the arbitrary and incoherent use of financial sanctions might lead to an acceleration away from the dollar as a key international, and maybe even reserve currency.  But we have yet to see evidence for that, and in general, the dollar’s dominance (at least as a reserve currency) has remained despite three years of Trump. (If anything, the euro has lost ground in recent years.)

So, it is possible that some of the weakness of the dollar is due to a decline in the dollar’s role as an international currency, but I’d bet more on macro and risk factors, in particular the mounting evidence of a double dip recession and incompetent fiscal and public health policies (a view buttressed by declining real interest rates).

The IMF tracks central bank reserve composition (which is different than use in international transactions such as invoicing, banking transactions, etc.), in its COFER database. Here is a snapshot of latest data. 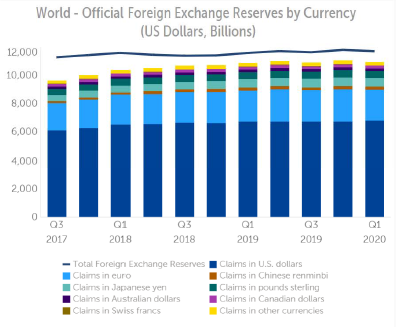 The IMF also has just released work on dominant currencies.

30 thoughts on “The Dollar’s Value under Pressure”