Today, we are pleased to present a guest contribution written by Joshua Aizenman (University of Southern California) and Hiro Ito (Portland State University) .

The pandemic of the new corona virus, COVID-19, wreaked havoc of the global economy in 2020. According to the International Monetary Fund (IMF), as of June 2020, the world economy’s GDP is predicted to shrink by 4.4% in 2020, the largest shrinkage since the Great Depression of the 1930s. To calm financial markets and avoid a possible free fall into a Great Depression, many countries, especially AEs, mobilized policy resources. The stimulus packages among AEs have amounted to about $4.2 trillion in 2020, leading these economies to run budget deficits of almost 17% of their GDP. Their central banks rapidly expanded balance sheets to 10% of GDP. According to the Manhattan Institute, the U.S. alone will run a budget deficit of $4.2 trillion, or 19% of its GDP, the largest share since the deficit peak occurring during WWII (Figure 1). That would push the U.S. national debt held by the public to $41 trillion or 128% of GDP by 2030. This level of the national debt would exceed the level that occurred in 1946 (Figures 2 and 3). 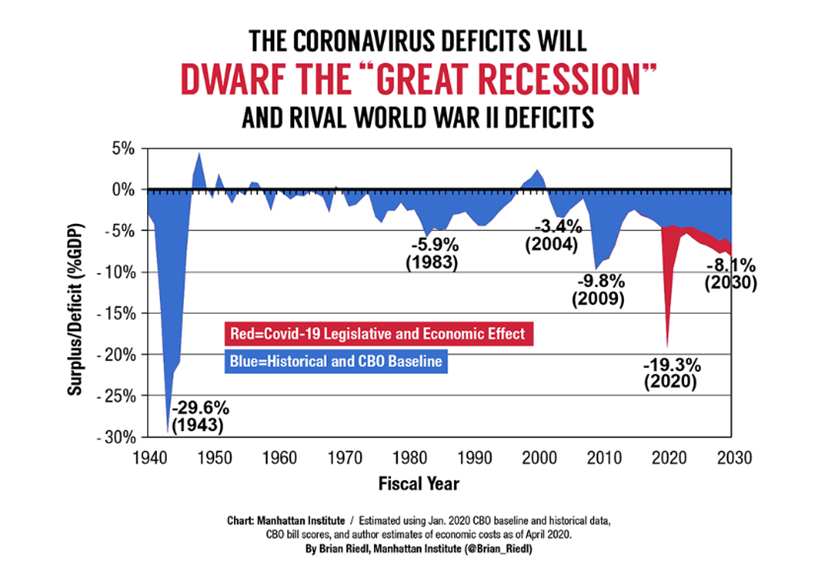 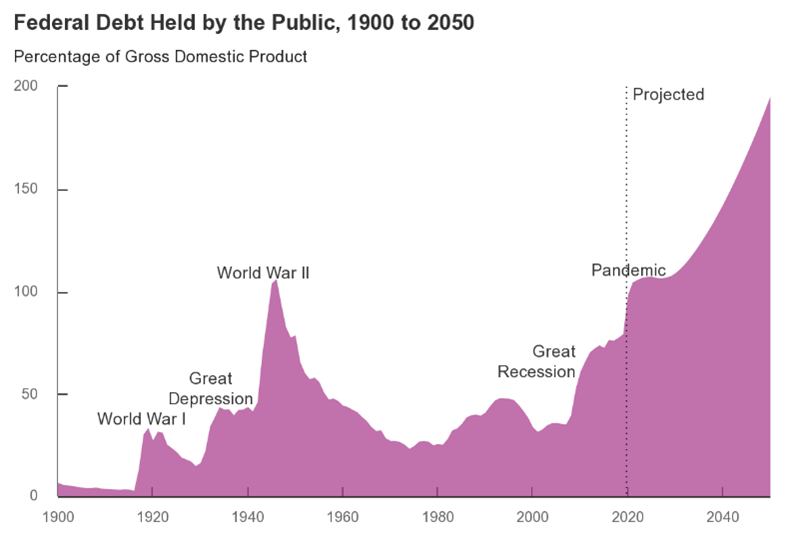 With vaccinations for the virus possibly in sight, it is time to ponder an effective economic exit strategy into the post-COVID era. The road the U.S. will take will have overarching repercussions on the global economy given the size and the pivotal role of the U.S. dollar as the anchor of the global financial system.  To gain more insight on the road ahead, in Aizenman and Ito (2020) we compare two divergent U.S. post COVID economic strategies. The first is just ‘kick the can down the road.’ That is, the U.S. government could delay implementing needed macroeconomic adjustments and gamble for resurrection of the economy while continuing to run lax monetary and expansionary fiscal policies. This choice may bring about short-term buoyancy to the U.S. economy, but will more likely come with growing exposure to the risk of a future global crisis, possibly worse than the 2008-2011 crisis.

Alternatively, the administration could adopt a two-pronged policy, reallocating the fiscal efforts first, while aiming at reaching a primary surplus overtime.  Specifically, it could retrench from expenditures oriented towards COVID-related challenges, and move towards expenses with a high social payoff (e.g., upgrading K-12 education, investing in medical infrastructures, etc.). With a lag, the restructured fiscal policy together with a rise in tax collection may reduce primary budget deficits, aiming to reach surpluses.

In this paper, we analyze these divergent policies in terms of their implications on the gap between the interest rate paid to service government debt, denoted by r, and the growth rate of the economy, denoted by g. This gap, r – g, aka the “snowball effect,” is the exponential growth of the public debt/GDP in countries with zero primary deficit.  It is tempting to presume that the new normal for the future comprises negative snowball effects associated with secular stagnation. Yet, there are several concerns to keep in mind. First, Wyplosz (2019) pointed out that negative snowball effects are not the rule, and even in the US, r – g < 0 happened in 56% of the years. Furthermore, the past performance of the U.S. as the safe anchor of the global financial system does not guarantee maintaining the “exorbitant privilege” status into the future [see Gourinchas, Rey and Govillot (2010), Eichengreen (2011) and Carney (2019)].  The two-pronged U.S. post COVID exit strategy discussed in our paper may mitigate the growing discontent with the dominance of the U.S. dollar.  Greater attention on the part of the U.S. to scaling down overtime its public debt overhang will mitigate the present centrifugal forces working towards multipolar global currencies discussed by Carney (2019).  An additional concern is that the record of predicting future changes of the snowball effects is mixed, at best.  Presuming that the new normal is a negative snowball effect may increase overtime the risk of a deeper future crisis, as was the case in the late 1990s and early 2000s when the presumption of an enduring ‘Great Moderation’ permeated policy makers.

Specifically, we examine the interest-rate-growth differentials in the post-WWII period.  In the period of 1946-1956, the post-WWII U.S. fiscal policy facilitated global growth where the U.S., Western European countries and Japan successfully grew while repressing the interest rate. Their snowball effect, r – g, was often negative during that period. This helped to load-off the public debt overhang associated with the war and reconstruction efforts.  In contrast, during 1974-1984, the snowball effect became unsustainably high for many EMEs, triggering a series of financial crises.  Next, we investigate whether and to what extent the cost of serving the public debt affected real output growth. The flow cost of serving debt is estimated by the snowball effect times the public debt as a share of GDP. A higher flow cost of serving the debt may lead investors to question debt sustainability, raising the interest rate, reducing the growth rate, further increasing the snowball effect.  This negative feedback may induce costly market corrections, financial instability and crisis.  The Emerging Markets’ lost growth decade during the 1980s, and the Eurozone sovereign debt crisis affecting mostly the Southern Eurozone states illustrate vividly these dynamics.

Figure 4 shows that the median interest-rate-growth differential, r – g, is mostly low and in the negative territory during the 1940s and 1950s – Our sample is composed of 23 traditional OECD countries and 34 EMEs. For the interest rate, we use the 10-year government bond yields for the countries for which such data are available. Thereby, the U.S., Japan and Western European countries benefited from low costs of serving their public debt during the post-WWII recovery decades. The snowball differential continues to be in the negative territory through the 1970s. In the early 1980s, the differential rises up rapidly to the positive territory and mostly remains there until 2000. The 75th percentile (dotted blue) line hovers at high levels in the 1980s and 1990s, indicating that the top 25% of countries in the interest-rate-growth differentials faced very high costs of serving their public debt. These countries include mostly Latin American states, experiencing debt crises and hyperinflation spells during the 1980s. In the mid-2000s, the differential drops towards negative figures, but rises up again to the positive territory in the 2010s. 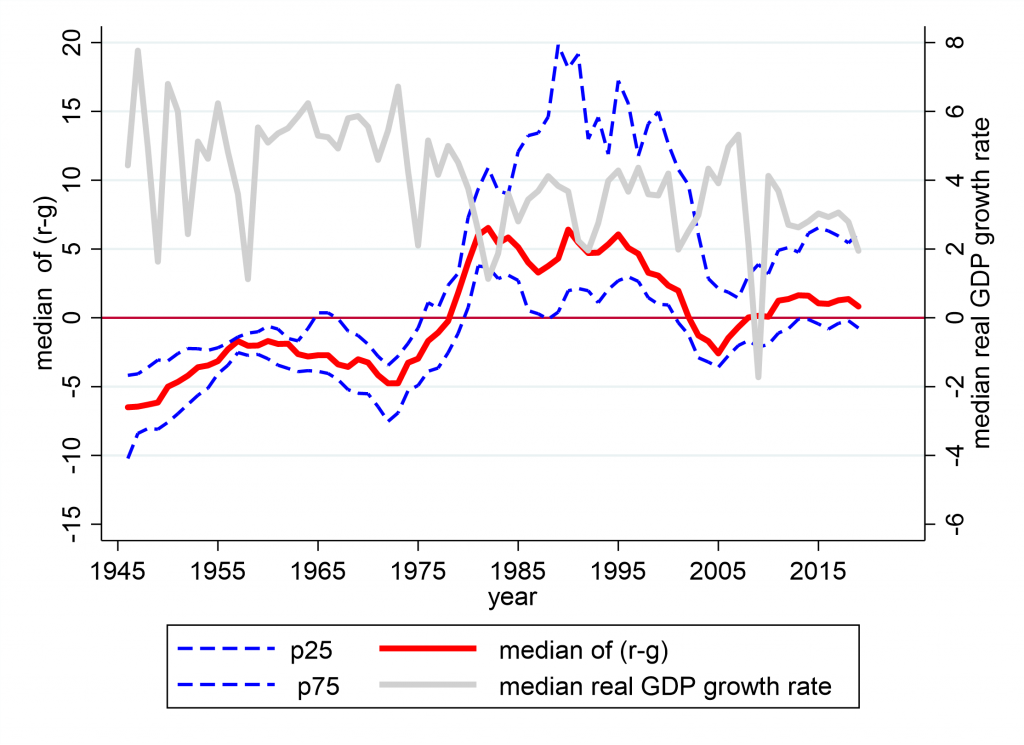 The grey solid in in Figure 4 is the median growth rate of real GDP (in local currency), measured by the right scale. A casual observation is that there is a negative correlation between real output growth and the interest-rate-growth differential.  Our empirical work validates that a rise in the cost of external debt would lead with lags of two to three years to output growth slowdown, and these effects add up, explaining the lost growth effects of Latin America and other EMs during 1980s.  A faster rise in the flow cost of serving external debt has a negative impact on output growth, and this effect is dampened if the country experiences real appreciation.  Consequently, U.S. post COVID exit policies reducing the odds of rapid increase in snowball effects may reduce future volatility, stabilize and increasing the global growth rate.

The history of the U.S. after WWII provides a vivid example of the success of a two-pronged approach in facilitating the exit from a public debt overhang, stabilizing the global economy, and solidifying the global role of the dollar.  The rapid decline in public debt/GDP from 1946 to 1955, exhibited in Figures 2 and 3, was accommodated by financial repression inducing lower r, mild inflation (~ 4.2%), higher taxes and robust GDP growth [Aizenman and Marion (2011), Reinhart and Sbrancia (2015), Reinhart, Reinhart and Rogoff (2015)]. Figure 5 shows vividly the sharp drop of WWII U.S. fiscal revenue mobilization from 50% GDP points in 1944 towards 20% by 1946. Starting in 1947, this large revenue contraction was followed by an upwards trend, increasing the fiscal revenue/GDP to 35% in the 1970s.  Remarkably, the US government was running mostly primary surpluses during that period (Figure 6). These policies supported a solid economic growth, reducing the public debt/GDP from 106% in 1946 to 23% in 1974. This post WWII success story illustrates the feasibility and gains from a two-pronged fiscal strategy.  Looking forward, reallocation of fiscal spending from fighting COVID’s medical and economic challenges towards physical, medical and social infrastructures may provide a welcome burst to future growth.  With a lag, following the resumption of robust growth, increasing taxes and reaching primary surplus may stabilize the U.S. and the global economy.  Such a trajectory may solidify the viability and credibility of the US dollar as a global anchor, stabilizing thereby Emerging Markets economies and global growth.

Carney, M. 2019. August. “The growing challenges for monetary policy in the current international monetary and financial system.” In Remarks at the Jackson Hole Symposium (Vol. 23).

Eichengreen, B., 2011. Exorbitant Privilege: The rise and fall of the Dollar and the Future of the International Monetary System. Oxford University Press.

This post written by Joshua Aizenman and Hiro Ito.