“The value of the U.S. dollar and other currencies should be determined by markets. Markets adjust to reflect variations in economic performance and generally facilitate adjustments in the global economy”, Yellen will say, if asked about the incoming administration’s dollar policy, according to the report.

Just because the US takes no action to depreciate the dollar doesn’t mean it won’t move. Market forces includes expectations of future policy, and perceived risk and uncertainty. Just moving to a coherent framework of fiscal and international policies (conjoined with presumably coherent monetary policy) will reduce economic policy uncertainty, which has been elevated during the Trump years. 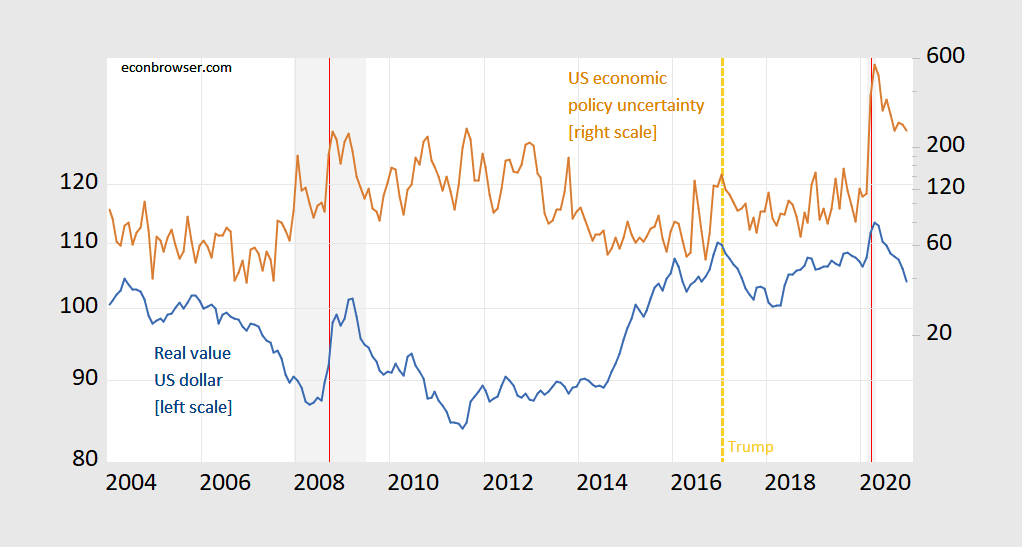 My estimates, detailed in this post, suggest that the dollar was 12% appreciated relative to a counterfactual of “average” uncertainty, even before the pandemic struck. A reduction in policy uncertainty, as measured by the Baker, Bloom & Davis index, will induce a weaker dollar, holding all else constant. Of course, there is no guarantee that such a uncertainty reduction will occur given the unsettled nature of the current political scene – but surely a set of experienced and consistent policymakers at the helm cannot hurt.

41 thoughts on “Treasury Secretary Designate Yellen on the Dollar”