Angus, Atalay, Newton and Ubilava write “Editorial boards of leading economics journals show high institutional concentration and modest geographic diversity”. There’s no doubt diversity of all types is an issue of concern in the economics professions, and here’s one more dimension.

Noting the US dominance in journals, the provide the following geographical summary of editorships: 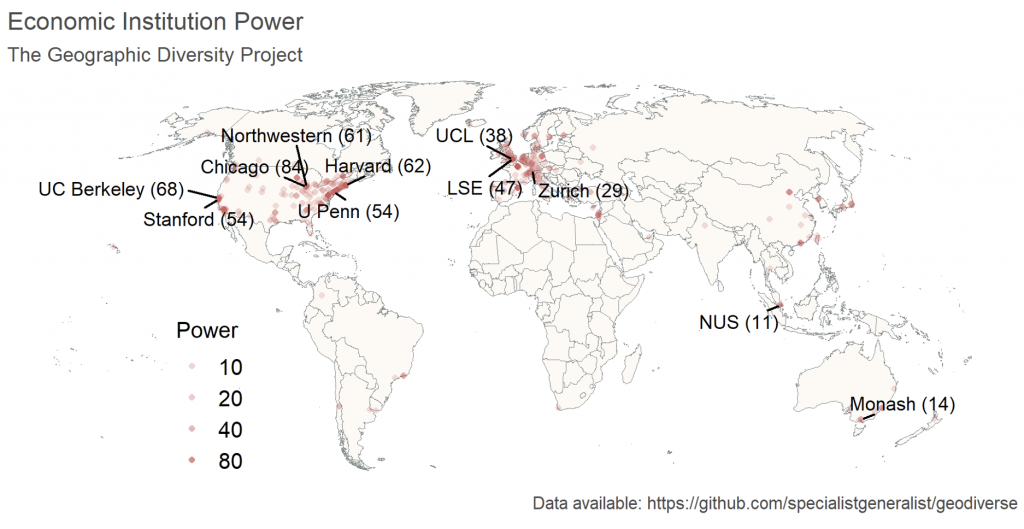 Much more detail is provided in the underlying paper. I happen to be a coeditor of the Journal of International Money and Finance. That journal did not make it into the their list, but it did make it into Google Scholar’s 2021 list of top 20 economics journals, by impact factors. The publisher (Elsevier) has recently updated JIMF‘s editorial page to include nifty flags (the numerical count is right for the US, even if for some reason, I don’t get one). 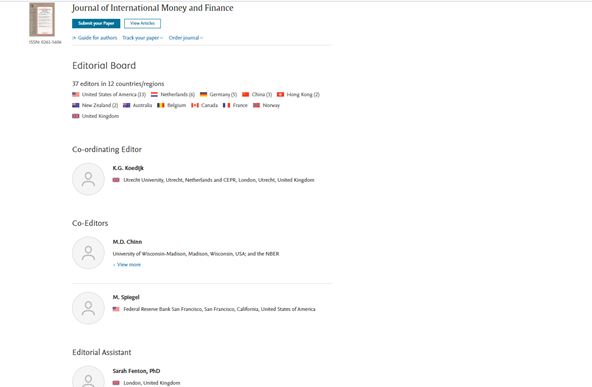 No summary of other dimensions of diversity; JIE has a more detailed breakdown. I’ll note that the gender disparity is definitely apparent, with only 3 females on the editorial board. (On the other hand, I will note that I’m the first Asian or Asian-American editor/coeditor in JIMF‘s 40 years.)

Unsurprisingly, the JIMF partly conforms to the norm that the center of gravity of editorships is concentrated in the US (two of three have been in the US for something like a decade). For the editorial board — the importance of which varies greatly across journals — there is somewhat broader representation, although as a journal dealing with international economics, you might expect more diversity. The editorial board includes representation of academics in China, in Hong Kong (which is counted separately in this tabulation), as well as New Zealand and Australia. No members in Africa or the Asian Subcontinent. There is one think-tanker (deutsches institut für wirtschaftsforschung), five central bankers (although admittedly there are more if you include lapsed central bankers), and most of the rest academics.

Does the distribution of editorships and editorial board members matter? I don’t know. If you consider the special issues that JIMF has published over the past 7 years, I’d say there is plenty of geographical distribution — international finance/open economy macro people go to where the problems are!

Now, whether the methodological approaches and literature cited in the papers in these special issues (and in the journal generally) depends critically on the geographical location of editors or editorial board members remains an open question. Personally, I suspect it depends more on the intellectual lineage of the editors — more on that in another post.