The debate over the role of expectations in inflation determination [e.g., discourse over Rudd’s working paper] gives me a sense of deja vu. That being said, it’s always useful to see what the data say, when running a simple OLS regression on a basic expectations augmented Phillips curve (without a statement on forecasting, which often includes conditioning on future developments). I examine PCE inflation over the 1986-2021Q2 period.

The left hand side variable is the 4 quarter change in the log CPI. The value of coefficient on oil prices is sum of four coefficients on 4 first differences of log oil prices. u-hat is the gap between observed official unemployment rate and what CBO now terms the noncyclical unemployment rate. (I am using CPI inflation expectations to predict PCE inflation; the former averages about 0.43 percentage points higher than the latter over this sample period.)

Inflation expectations come in with statistical significance in both cases. However, the estimated coefficients are well below unity (which one might expect in the simple expectations augmented Phillips curve). The Michigan survey coefficient is statistically significantly different from unity, while the SPF estimate is just significantly different at the 95% level. (By the way, one might expect a downward bias if the expectations proxy is measured with error, and uncorrelated with the other right hand side variables.)

How stable are these estimates? Using recursive 1-step ahead Chow tests, the Michigan survey based equation exhibits breaks in 1996 and 2009 (at the 1% level). For the Survey of Professional Forecasters based equation, no breaks at the 1% level are detected, although several at the 5% level.

In some ways, this is not too surprising, given the the way expectations and actual inflation comove. 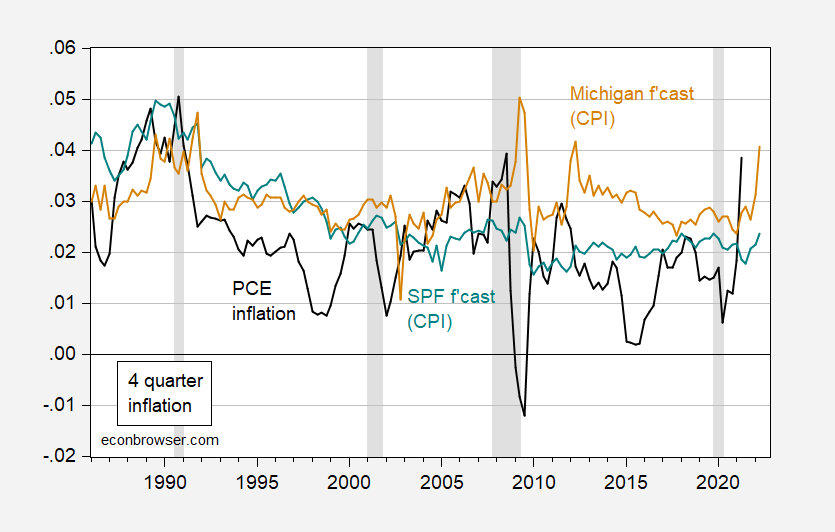 So, I think expectations (measured by survey data) are empirically linked to actual inflation outcomes. I’ve not established a causal link (which is for instance in the Friedman-Phelps story). Nor have I established that expectations measures would help in forecasting; that depends (at least in part) on other factors, including the extent and nature of measurement error.

Reader Marco Bassetto asks why not include lagged inflation. That’s a good question; lags could be motivated by nominal rigidities a la Taylor or Fischer – and that specification is similar to one used by Blanchard, Cerutti and Summers (2015). So without further ado, I augment the two estimated equations with the four quarter inflation rate, lagged four quarters:

The message from these regressions is that lagged inflation does enter significantly — although why it does might be because of nominal rigidities like overlapping contracts, or because survey based expectations measures are measured with error, and are themselves correlated with lagged inflation. A related point is that the SPF measure retains its significance, while the Michigan (consumer) measure does not. So, which expectations measure you pick matters.

(On the other hand, the activity variable — the unemployment gap — is wrong signed, albeit not significantly so.)

28 thoughts on “Just How Small Is the Impact of (Measured) Expected Inflation?”