Today, we are fortunate to be able to present a guest contribution written by Agustín Bénétrix and André  Sanchez Pacheco (Trinity College Dublin).

The degree of international financial integration (IFI) of a country is conventionally measured using cross-border estimates of its external assets and liabilities. However, focusing on cross-border positions may leave important international investments out of the calculation. When analysed through a consolidated-by-nationality approach, we find that the U.S. economy is substantially more integrated to the rest of the world. U.S. consolidated-based IFI doubled between 1999 and 2018, driven mainly by U.S. multinationals expanding their global footprint. As an example of the many potential uses of these data, we document the relation between corporate income tax differentials and U.S. international financial integration not captured by standard cross-border statistics.

How can one measure the degree of financial integration of an economy to the rest of the world? One frequently used de-facto measure is the index of International Financial Integration (IFI) proposed by Lane and Milesi-Ferretti (2003). This measure is calculated as the sum of the external assets and liabilities of a country divided by its Gross Domestic Product. External assets and liabilities are typically estimated using a residence-based methodology in which only cross-border transactions are considered. Assets and liabilities are then apportioned according to the residence of the immediate counterparts of such transactions.

However, focusing on cross-border positions may leave important foreign investments out of the calculation. For example, consider the affiliate of a U.S. multinational enterprise (MNE) operating in a foreign country, say the Netherlands. The local assets held by this affiliate represent assets of a U.S. company located outside the U.S. (in the Netherlands) and liabilities of Dutch agents relative to a company whose ultimate owner does not reside within the same border. These assets can be characterised as international investments made by an U.S. company in a foreign country. Yet the local assets held by this affiliate are not booked as U.S. external assets nor Dutch external liabilities when using the cross-border approach. As a result, these will be left out when computing the IFI of both countries.

An alternative approach that accounts for these international investments is to apportion assets and liabilities according to the nationality of the ultimate owner. This is equivalent to consolidating the local assets and liabilities of affiliates to the parent company and then assessing the international exposure of countries. In our example, this consolidated approach would imply booking the local assets of the U.S. affiliate in the Netherlands as U.S. foreign assets and Dutch foreign liabilities even though these are not cross-border investments. In principle, we can apportion any asset or liability to their ultimate owner. One can aggregate assets and liabilities according to the nationality of their owners and construct the entire foreign balance sheet of a country using this consolidation procedure.

Bénétrix and Sanchez Pacheco (2021) construct an estimate of the U.S. foreign balance sheet adopting a consolidated-by-nationality approach for the period between 1999 and 2018. The methodology used follows that of BIS (2015) and relies on publicly available data to produce a novel time series estimate of the consolidated balance sheet of the U.S. We then use such series to compute the index of U.S. International Financial Integration and analyse its evolution over the sample period.

Figure 1 shows the evolution of U.S. IFI based on the consolidated approach and compares it to the same measure calculated using the conventional cross-border. This figure shows that IFI is on average two times larger when calculated using the consolidated approach relative to the cross-border approach. It indicates that U.S. nationals hold sizeable amounts of assets and liabilities relative to foreigners that are not captured by cross-border statistics. 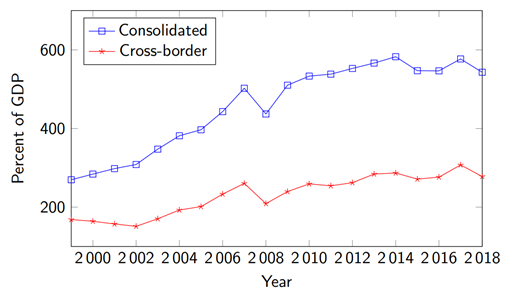 Note: This figure shows the evolution of consolidated-based and cross-border based measures of U.S. International Financial Integration. U.S. IFI is computed as the sum of foreign assets and liabilities divided by GDP. Our calculations do not include financial derivatives given the existing challenges to determine the nationality of their ultimate owners.

This figure also shows that IFI increased substantially between 1999 and 2018. We find that the consolidated-based measure of U.S. international financial integration doubled in this horizon and represents 543% of U.S. GDP by the end of our sample.

The role of multinationals

We then investigate the key drivers behind this extraordinary expansion. Figure 2 shows the evolution of foreign assets according to different functional categories/sectors described in our paper. Non-bank multinationals were the single most important contributor driving the expansion of U.S. foreign assets. Similarly, the same pattern emerges when analysing foreign liabilities. Around half of the IFI increase between 1999 and 2018 can be attributed to these companies. 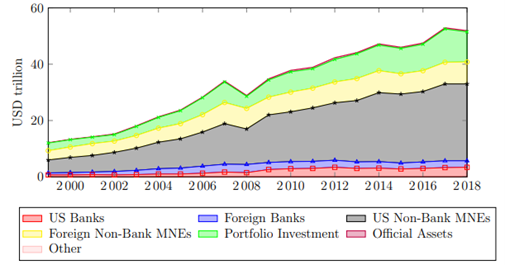 The important increase in foreign holdings by U.S. multinationals coincides with the documented rise in profit shifting activities by these companies. Zucman (2014) shows that the share of U.S. corporate profits booked abroad increased substantially since the start of this century.

Dischinger and Riedel (2011) find that multinational enterprises shift the location of their intangible assets towards low-tax affiliates within the group. Given the prominent role played by MNEs, we study whether the statutory corporate income tax differential is positively related with IFI. We document a robust relation between tax differentials and IFI when analysing both its cross-border and consolidated-by-nationality versions. Moreover, we investigate whether the difference between the consolidated and cross-border measures (DIFI) is also correlated with the tax differential (CorpTax).

Table 1 shows the regression results of DIFI on the corporate income tax differential and control variables. Columns (1) and (2) show a positive and statistically significant coefficient estimate for CorpTax. To shed light on this result, we decompose DIFI into DIFI related to the activities of multinational enterprises (DMNE) and IFI unrelated to them (DXME). Columns (3) to (6) reveal that the positive coefficient estimates of CorpTax can be largely attributed to multinational enterprises.

Taken together, we interpret these results as indirect evidence of U.S. multinationals taking advantage of tax differentials in ways that go beyond what is captured by traditional Balance of Payments procedures. Such findings are robust with respect to different control variables and methodologies used to compute of the corporate income tax differential.

Bénétrix and Sanchez Pacheco (2021) construct the first consolidated-by-nationality foreign balance sheet of any country for multiple years. This approach reveals that the U.S. economy is substantially more integrated to the rest of the world. Using these novel data, we find that the difference between the two IFI measures is positively correlated with the corporate income tax differential. Such finding suggests that the tax differential is associated with an expansion of the global footprint of U.S. multinationals beyond what is captured by cross-border statistics.

This paper is the first of the broader Consolidated Foreign Wealth of Nations project that seeks to create publicly available estimates of consolidated-by-nationality foreign asset and liability holdings for multiple countries. This dataset will complement the seminal work by Lane and Milesi-Ferretti (2001, 2007, 2018) which provides estimates of cross-border based external assets and liabilities for all countries.

This post written by Agustín Bénétrix and André Sanchez Pacheco.