In the old literature on sanctions, costs imposed on the economy had to be pretty large in order to effect change (Hufbauer notes sanctions had an average impact around 2% of GDP, which wasn’t much; sanctions on Iraq were on the order of 5%). Those announced on Russia so far would not have that magnitude of impact in the short run (maybe different in the longer run). However, cutting off Russia from SWIFT — in addition to other restrictions on financial transactions — might come closer. Sanctioning the Central Bank of Russia, apparently under consideration, might come yet closer.

The move would be “devastating” for Russia, according to Tim Ash, a strategist at Bluebay Asset Management in London. “We would see the ruble crash.”

Although the decision would be without precedent for an economy the size of Russia’s, the U.S. has previously sanctioned the central banks of adversaries. In 2019, the Treasury Department blacklisted the monetary authorities of Iran and Venezuela for funneling money that supported destabilizing activities in the respective regions. North Korea’s central bank is also blacklisted.

The article notes that the Central Bank has reduced its holdings of dollars – at June 2021, dollars were 16.4% of foreign exchange. 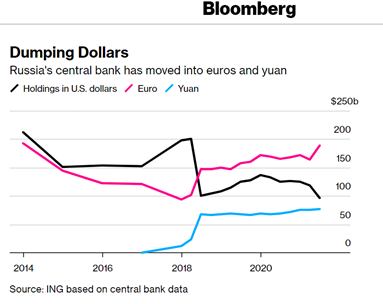 It’s not clear to me the impact on the Central Bank of Russia of the US sanctioning it are proportional to dollar holdings.