The Federal Open Market Committee (FOMC or Committee) raised the target range for the federal funds rate (FFR) by 3/4 percent (75 basis points) from 0.75 – 1.0 percent to 1.5 – 1.75 percent at its June 2022 meeting and projected a range between 3.25 and 3.5 percent by the end of 2022. While the statement “anticipates that ongoing increases in the target range will be appropriate,” Chair Powell’s press conference, the minutes, subsequent remarks by FOMC members and the most recent inflation data make it clear that another 75 or even 100 basis point increase in July is virtually certain. This followed a 25 basis point increase from the effective lower bound (ELB) of 0.0 – 0.25 percent in its March meeting and a 50 basis point increase in its May meeting.

While there is widespread agreement that the Fed fell “behind the curve” by not raising rates quickly enough when inflation rose in 2021, there are two very different leading explanations. The “we didn’t know” explanation, advanced by Fed Chair Jerome Powell and other members of the FOMC, is that the Fed did not realize that inflation would rise so much in 2021 and, if they had, they would have raised rates in fall 2021 instead of spring 2022. The “they should have known” explanation, advanced most prominently by Larry Summers, is that the Fed should have known that inflation would rise and raised rates sooner.

Much of the discussion of the Fed being behind the curve depends on subjective analysis of when liftoff from the ELB should have occurred. In a new version of a paper that includes the June 2022 Summary of Economic Projections (SEP), “Policy Rules and Forward Guidance Following the Covid-19 Recession,” we use data from the Summary of Economic Projections (SEP) from September 2020 to June 2022 to compare policy rule prescriptions with actual and FOMC projections of the FFR. This provides a precise definition of “behind the curve” as the difference between the FFR prescribed by the policy rule and the actual FFR.

At its September 2020 meeting, the Committee approved outcome-based forward guidance, saying that it expected to maintain the target range of the FFR at the ELB “until labor market conditions have reached levels consistent with the Committee’s assessment of maximum employment and inflation has risen to 2 percent and is on track to moderately exceed 2 percent for some time.”

If the Fed had followed a policy rule using inflation and unemployment data from the FOMC’s quarterly SEP’s instead of the FOMC’s forward guidance,  they could have avoided the pattern of falling behind the curve, pivot, and getting back on track that characterized Fed policy during 2021 and 2022. The rules prescribe liftoff from the ELB in 2021:Q2 or 2021:Q3 and a much smoother path of rate increases through the end of 2022 than that adopted/projected by the FOMC. Since the rules use data from the SEP rather than inflation and unemployment expectations, it makes the “we didn’t know” explanation irrelevant and the “they should have known” explanation unnecessary.

Neither the original nor the shortfalls rules are consistent with the revised statement. We introduce two new rules in accord with the revised statement that we call the Taylor and balanced approach (consistent) rules. First, we replace the rate of unemployment in the longer run with the unemployment rate consistent with maximum employment and base FFR prescriptions on shortfalls instead of deviations. Second, if inflation rises above 2 percent, the rule is amended to allow it to equal the inflation rate “moderately” above 2 percent that the FOMC is willing to tolerate “for some time” before raising rates in order to bring inflation down to the 2 percent target.

Starting with the original Taylor rule, normative policy rule prescriptions are typically “non-inertial” as the prescribed FFR depends on the realized values of the right-hand-side variables. Following Clarida, Gali, and Gertler (1999), estimated Taylor-type rules are typically “inertial” to incorporate slow adjustment of the actual FFR to changes in the prescribed FFR. Policy rule forward guidance, however, involves normative policy rule prescriptions that need to be inertial when inflation rises quickly in order to be in accord with the FOMC’s desire to smooth out large rate increases over time. We follow Bernanke, Kiley, and Roberts (2019) and specify inertial rules with a coefficient of 0.85 on the lagged FFR and 0.15 on the target level of the FFR specified by the corresponding non-inertial rule.

The figure depicts the actual FFR for September 2020 to June 2022 and the projected FFR for September 2022 to December 2024 from the June 2022 SEP. Panels A and B illustrate prescriptions from the non-inertial rules. Five of the six rules prescribe liftoff from the ELB in 2021:Q2, three quarters earlier than the actual liftoff. All of the non-inertial rules prescribe unrealistic jumps in the FFR. For the Taylor rules, there are prescribed jumps of at least 200 basis points in 2021:Q2 and 2021:Q4 and, for the balanced approach rules, there is a 275 basis point jump in 2021:Q4.  The prescribed rate increases peak in 2022 and are mostly 50 basis points below the FOMC projections at the end of 2024. 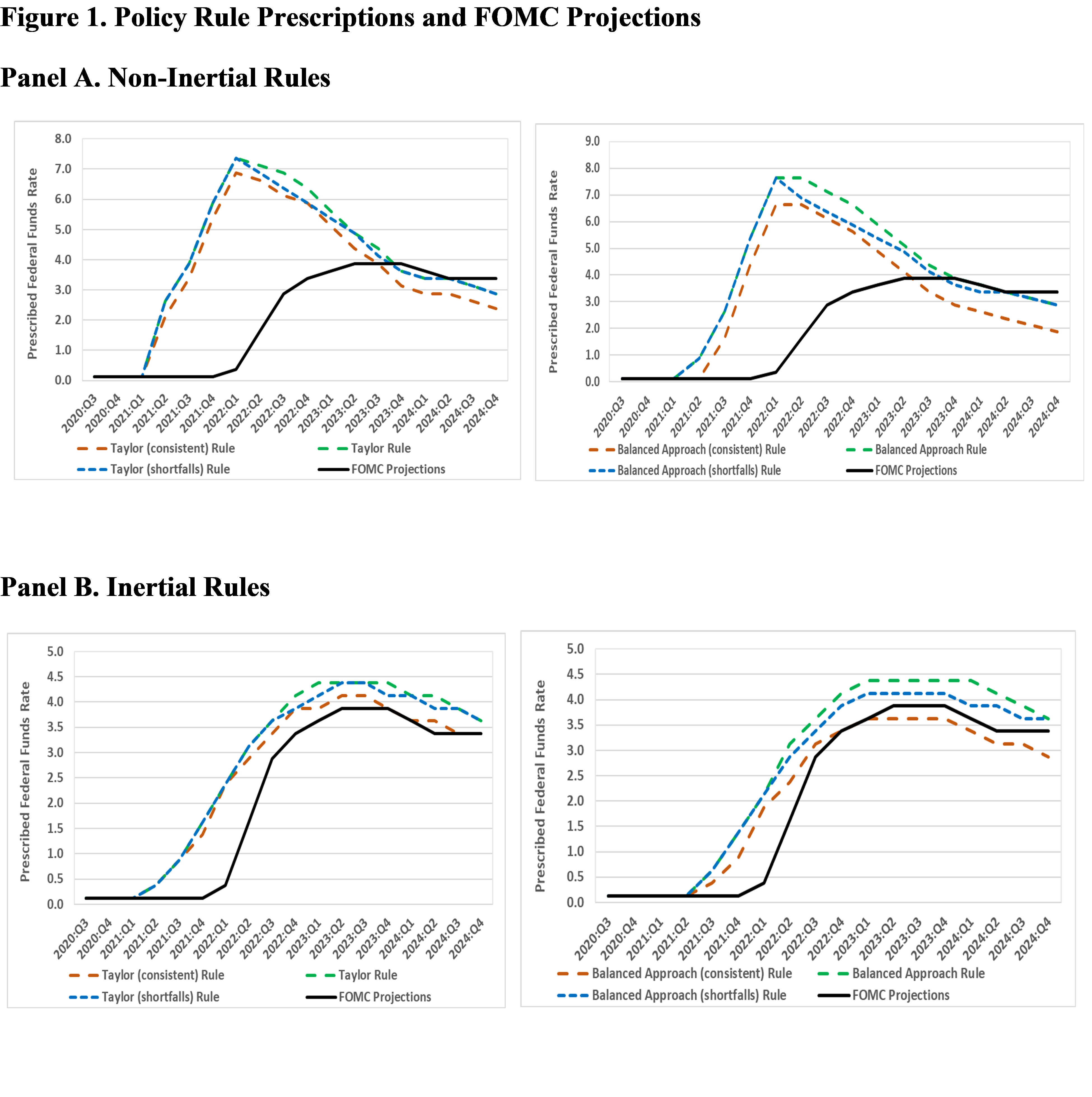 We focus on the balanced approach (consistent) rule through March 2022 because it is in accord with the Fed’s preference for balanced approach rules and the revised statement. In March 2022, the FFR was 1.5 percent below the policy rule prescriptions. By June 2022, high inflation had become the Fed’s priority. It had met its employment goals, clearly exceeded its inflation goals, and was not going to raise interest rates if unemployment rose from 3.6 percent to its longer-run value of 4.0 percent. We therefore shift focus to the balanced approach (shortfalls) rule. By June 2022, the gap fell to 1.25 percent and, by December 2022, it is projected to further narrow to 0.5 percent. The FOMC could eliminate the gap by the end of 2022 by implementing 50, rather than 25, basis point rate increases in November and December 2022.

39 thoughts on “Guest Contribution: “The Fed Fell Behind the Curve by Not Following its Own Policy Rules””