[Updated 7/22 using 7/22 BOFIT Weekly Monitor information] It depends on what you mean by “working”, even if Russian GDP (as reported) hasn’t collapsed yet in the reported statistics yet, the worst is likely yet to come. And some effects won’t be easily measurable. 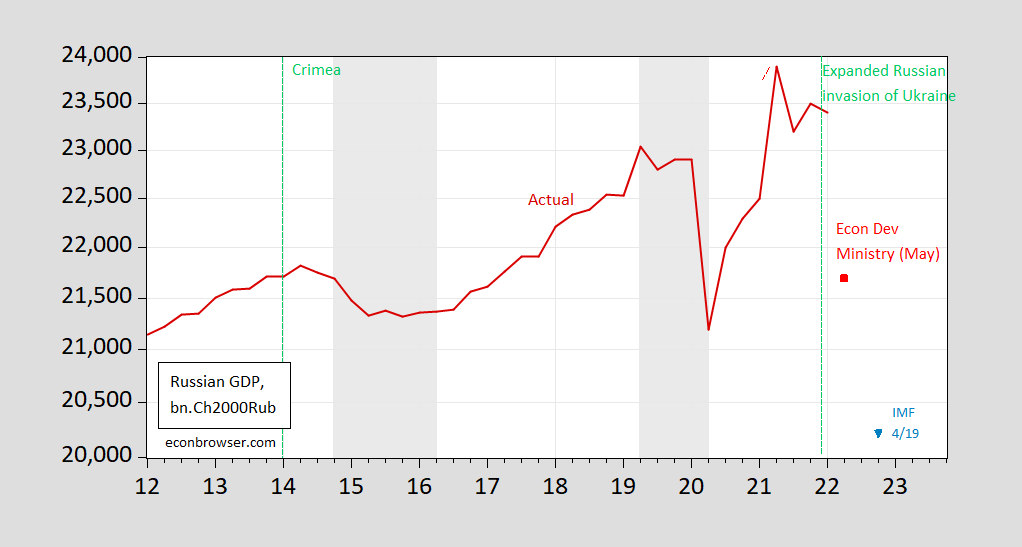 Some observers have noted that Russian GDP y/y has not collapsed in Q1 (the latest reported data). Note that 3.5% y/y reading is exactly that — year-on-year growth, which encompasses about one month of the post-sanctions period (the expanded invasion of Ukraine started on February 24th, so only March is in the Q1 post-sanctions data). We don’t have Q/Q growth rates reported by Rosstat, but if I iterate on previously reported quarterly GDP data, then we can infer the path of GDP shown in Figure 1. Figure 1-Revised, as described in BOFIT’s Weekly Monitor today shows a That implies a -1.7% decline +0.5% increase in 2022Q1 GDP. on an annualized basis — pretty big considering only one month of the quarter reflects the sanctions environment.

Are we on the path toward the IMF’s estimate in the April World Economic Outlook? BOFIT cites a May GDP y/y reduction of 4%, which if I assume May represents Q2, and we work off of 2021Q2, shows up as the red square in Figure 1. It does look then it looks like a big GDP drop is still in the cards, perhaps not as big as S&P’s March forecast, though.

In its July 8th Weekly Monitor on Russia (an indispensable resource on this topic), the Bank of Finland’s Institute for Emerging Economies (BOFIT) noted:

Russia’s Center for Macroeconomic Analysis and Short-Term Forecasting (CMASF) finds a larger contraction in Russian industrial output in recent months when military production is excluded. CMASF estimates industrial output fell by 4 % in May. Russia’s lower-house Duma this week approved a law amendment that allows the government to impose special measures on firms to fulfil military needs. Firms can be compelled, for example, to manufacture goods for the military, repair military equipment or provide the military with transport.

So, one needs to look behind the numbers to get a better feeling for the state of the Russian economy.

Wage growth (y/y) negative even as measured inflation (y/y) is way up.

The combination of these last two figures is to imply a large real wage drop.

While the ruble has recovered to pre-sanctions levels, it has done so with incredibly stringent exchange controls, so much so that it is not appropriate to consider the current rate a “market rate”. Imports are down, although exactly how much down is hard to say, since the government has clamped a cone of silence on the trade data (see Starostina/Carnegie Endowment). Here’s the Kiel Institute’s numbers: 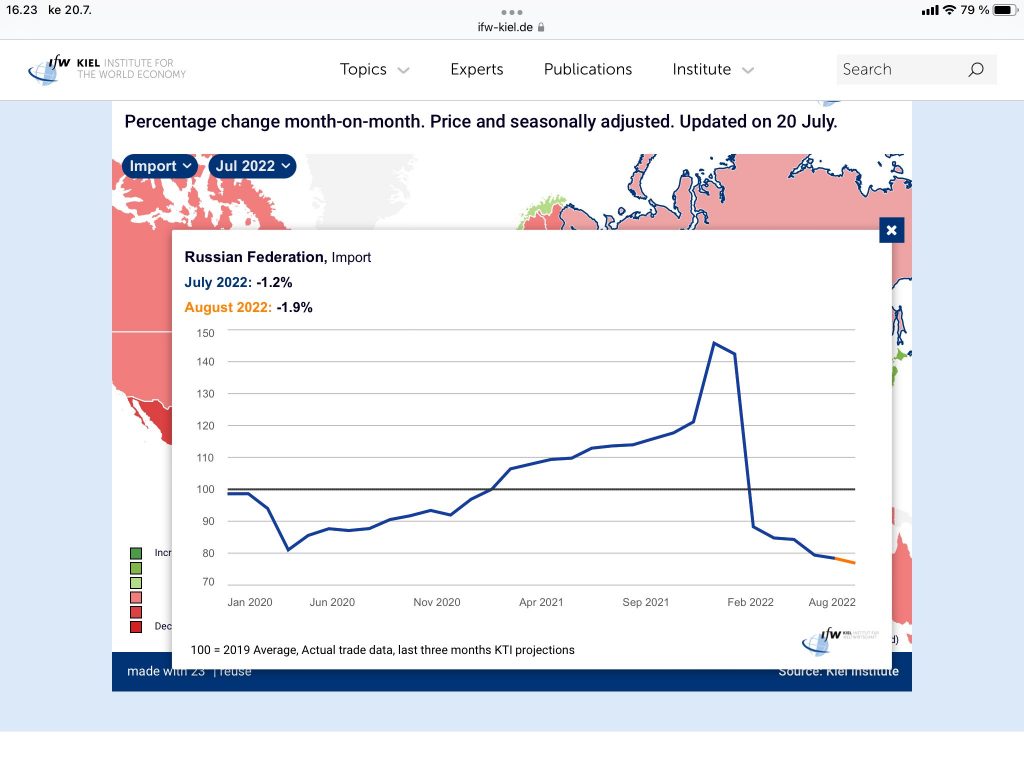 One can infer what’s happening by looking at what exports to Russia look like: 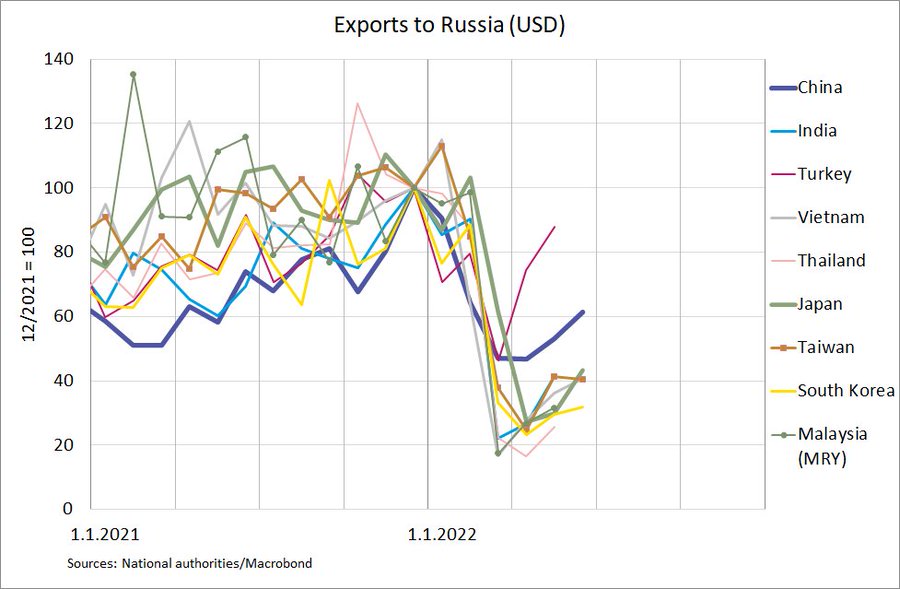 The government does seem to be pressed in budgetary terms, insofar as revenue growth is not keeping pace with inflation, as discussed by BOFIT (July 21st).

In June, the nominal income of the federal budget was only one and a half percent more than a year earlier. The drop in income is really big in real terms, as the increase in consumer prices and industrial producer prices from a year ago was 14% on average in June. [google translation from Finnish].

Despite this, the budget remains in (slight) surplus; but that need not remain the case.

In some ways, the impact on the Russian economy will not be reflected very much in these macroeconomic indicators. Rather (in my own opinion), they will have a profound medium to long term impact on the economy, and the ability for the Russian military to project its power abroad. That is through the impact of trade/high-tech sanctions. As discussed in this Breugel article, the export sanctions applied to Russia are constraining production now (and almost assuredly impacting military production, of high tech munitions, aircraft, even tanks).

Targeted sanctions on specific technologies, financial sanctions and ‘self-sanctioning’ by private companies are effectively decoupling Russia from supplies of high-tech goods. The combination of technological and financial sanctions, public pressure and reputational risk, and the collapse of the Russian economy has made the decision to leave the Russian market easy for companies, and not just those from NATO-allied countries.

Russia has tried to resist technological sanctions by import substitution, but without success. High-tech products are developed using inputs from many countries, but few of them can function without inputs from the European Union or the United States. As a result, a single economy cannot replicate the capabilities of the global network.

In some high-tech goods industries, the effect of sanctions is already being felt. In the long term, sanctions will also severely affect Russia’s growth outlook and ensure that waging war means Russia will cease to be a modern economy. Highly skilled Russians are already leaving, reinforcing the effect of the sanctions.

Of course, how debilitating high-tech export restrictions will be on the development of Russian military equipment is up for debate (see Rand, 2021, e.g.), so no guarantees.

27 thoughts on “Tracking the Russian Economy: Are Sanctions Working? [Updated]”