Two recent publications should help put to rest the conjecture that there are vast pools of U.S. wealth lying overseas, ready to save the day.

Sustained large U.S. current account deficits have led economists and policymakers to question whether future current account adjustment will occur smoothly or via a sudden and disruptive deprecation of the dollar and contraction in U.S. consumption. The stability of U.S. net external liabilities despite ongoing current account deficits cast some doubt on these concerns. So, too, do the minimal net income payments the United States makes on its large net liabilities. We show that the stability of the external position reflects sizable capital gains due to strong foreign equity markets and a weaker dollar, both of which could be reversed in the future. We also show that minimal U.S. net income payments reflect a much higher measure rate of return on U.S. FDI assets than on U.S. FDI liabilities. On present trends, however, ongoing borrowing is overwhelming this favorable rate of return, pushing the U.S. net income balance more deeply into deficit. We also review the argument that the United States holds large amounts of intangible assets not captured in the data, leaving the true U.S. net investment position close to balance. We argue that intangible capital, while a relevant dimension of economic analysis, is unlikely to be substantial enough to alter the U.S. net liability position.

In other words, just because things have gone well thus far does not mean they will continue to do so. How do they explain the simultaneous existence of a large negative net international position for the U.S., and near zero net income?

A closer look at the data reveals that the U.S. rate of return advantage lies entirely in FDI (Chart 5). Indeed, the rate of return on U.S. FDI assets abroad came to 8.0 percent during the first half of 2006 (top panel, solid line), vs. a rate of return on foreign FDI assets in the U.S. of just 5.1 percent (dotted line). A persistent U.S. earnings advantage is also evident in earlier years. In contrast, rates of return on other U.S. international assets and liabilities (bottom panel) were about the same during the first half of 2006, a pattern that has held historically.

…One point, though, should be clear. How U.S. foreign assets are valued has no implications for the income flows associated with them. If we conclude that U.S. FDI assets are “really” worth $6 trillion rather than the reported $3.5 trillion, we must also conclude that the rate of return on U.S. FDI has “really” been 4.7 percent rather than 8.0 percent. The same point holds for future FDI investments and income flows. If we believe that DubaiDisney, although requiring an initial investment of only $1 billion, actually generates a business line worth $2 billion, than it may make sense to value it at $2 billion. But future income receipts will be the same; the measured rate of return on Dubai Disney will simply be half as high as if it had been valued it at $1 billion.

Since the dark matter hypothesis sheds no light on current or future investment income flows, it has no substantive implications for the evolution of U.S. and global imbalances. Only asset reappraisals actually due to changes in expected future income receipts would carry such implications. Nor can the United States count on further leveraging its FDI position to keep large, ongoing current account deficits from translating into a deteriorating net income balance.

(This paper is not yet on the web, but an older, related version is here). [Addition on 12/12: Paper posted here]

A second paper (Statistical Issues Related to Global Economic Imbalances: Perspectives on “Dark Matter”) more directly discusses the Hausman-Sturzennegger (HS) conjecture. Ralph Kozlow at the Bureau of Economic Analysis (BEA) dissects the arguments HS make, and concludes that they have drastically mis-interpreted the way in which BEA calculates U.S. holdings of foreign assets, and foreign holdings of U.S. assets. 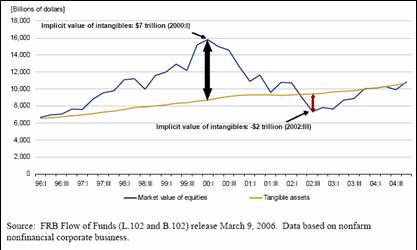