There’s been a flurry of discussion about nonresidential investment in the wake of Paul Krugman’s column (purchase required) on the subject. See commentary at Economists View and Brad Delong.

I had thought that the answer to the question I posed in the title was straightforward — namely that the answer was “yes”. My priors were informed by my reading of the capital investment literature in graduate school (embarrassingly, now quite a long time ago), wherein the conventional wisdom was that q-theory (based on the ratio of the market price of capital to the book price) and the neoclassical theory (based upon output and the user cost of capital) were inferior to models based upon cash-flow. But, now I have more nuanced view; below I explain why.

Before recounting some of the reasoning, let’s take a look at some indicators of investment. Figures 1-3 depict real gross business fixed investment, gross nonresidential structures investment, and gross equipment and software investment, respectively.


Figure 1 indicates that gross fixed investment is about 20% (in log terms) below that recorded at a comparable point in the previous NBER-defined expansion, and less than 10% below that in the 1982-90 expansion. Figure 2 indicates that the gap is not due to differential behavior in nonresidential structures investment; gross investment levels are about the same relative to the preceding trough. The interesting graph is Figure 3. Gross equipment and software investment is approximately 27% (in log terms) lower than at a comparable stage in the previous expansion, and — for those concerned about distortions attendant the “dot.com” bubble of the 1990’s — 18% below that at the same point in the 1982-90 expansion. 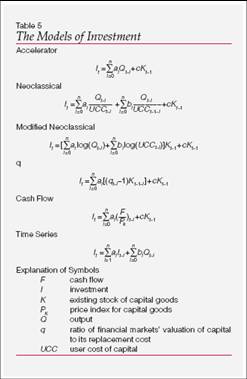 In Krugman’s column, essentially a cash flow model is being used. This makes sense insofar as cash flow appears to be a prime determinant of investment; for instance Kopcke and Brauman find that the cash flow model does well against all the other structural economic models for predicting real equipment investment over the 1991-99 period — save the modified Neoclassical model. For structures, the cash flow model outpredicts all save the accelerator. These results are shown in Table 7 from their paper.


Those involved in forecasting macroeconomic aggregates do seem to view earnings as a key determinant of investment. Chart 4 from a Deutsche Bank report (C.J. Riccadonna, US Economic and Strategy Weekly, March 9, 2007) shows the correlation between y/y growth rates of earnings and nonresidential investment in structures. Since investment in equipment and software lags structures investment, we should expect some further softness (Chart 3 from the document). 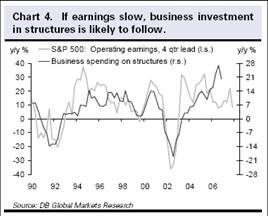 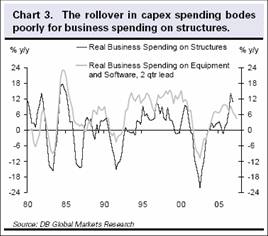 
In a recent Brookings Papers on Economic Activity, Mihir Desai and Austan Goolsbee (2004) argue that earlier attempts to fit q-theory specifications to the data were hampered by adherence to a traditional view of how new investments were financed:

…Under this assumption, net new equity finances investment, so that investment is determined by the point at which shareholders are indifferent between holding a dollar inside or holding it outside the firm.

…If, however, retained earnings are the marginal source of finance, the
traditional investment-q relationship … will not hold.

In this view dividend taxes do not influence the tax term for marginal investments. Instead they are fully capitalized into existing share prices. In other words, changes in dividend taxes serve solely as a penalty or windfall on existing firm values. To see the intuition behind this, consider a firm that uses retained earnings at the margin to finance investment, with dividends determined as a residual. In this model dividends are the only means of distributing earnings to shareholders. In this setting, given that retained earnings are the marginal source of financing, investment is determined by the point at which shareholders are indifferent between receiving a dollar today as a dividend…

So, when q is properly measured, Desai and Goolsbee find it, as well as a tax measure, has a greater impact on investment. It is therefore instructive to examine the evolution of q, and the tax variable (where lower values of the variable indicate a lower tax burden). 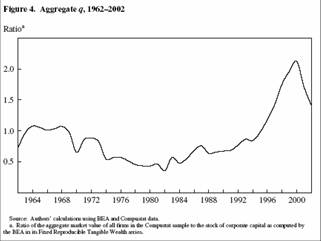 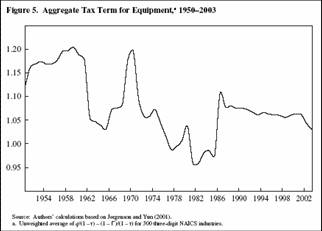 
q declines post-2001; no surprise. What is surprising — at least to me — is that the tax burden declines so little after 2001:

This relatively small effect stems from several factors. First, the value of an acceleration in depreciation allowances is a function of the corporate tax rate: with corporate tax rates already lower than they were in previous decades, altering depreciation schedules has a more muted effect. Second, the well-documented shift of investment toward computers and other equipment with shorter lives has meant that accelerated depreciation provides less relief. The average net present value of depreciation allowances for equipment investment in 2001 was already approximately 90 percent of the investment value even before the tax cuts, suggesting that even complete expensing (raising the net present value to 1) would provide limited additional benefit. Given the smaller magnitude of the 2002 and 2003 cuts, it is unsurprising that such incentives could not overcome the dramatic drop in investment induced by the remarkable drop in q over the period. Our estimates suggest that these incentives do work as they are designed, but that their magnitude is simply too small to counteract the aggregate trend.

One implication of the “new view” is that the tax breaks meant to spur investment ended up being essentially a pure windfall to firms, given the small increment induced in investment. (For a contrasting view, see the comments by Kevin Hassett).

In this context, I thought it would be useful to re-examine investment, but focusing on net values — that is investment after netting out depreciation.

Using net values, one finds that structures investment has fallen substantially from 2000 levels (as of 2005, at least). While net equipment and software investment exceeded 2001 levels by 2005, it is substantially below the level at a comparable stage in the previous expansion. Four years after the previous trough, net equipment and software investment was 150% above trough levels (in log terms). In other words, the recent linvestment performance looks even more unimpressive when one accounts for the extent of depreciation.

So, in some sense, the disconnect is not surprising when viewed in the context of q theory. One caveat is that stock prices have recovered recently. Still, the March CPI-deflated S&P500 remains only 82% of its August 2000 value. In the context the cash-flow model, the puzzle remains.

If Desai and Goolsbee are correct in their assertion that the “new view” prevails, then one lesson is that attempts to boost investment by further reducing corporate taxes, accelerating the expensing of capital expenditures, and so forth, will be unlikely to be very successful.

25 thoughts on “Is the “Investment Disconnect” So Surprising? Could It Be Even More Extreme Than We Think?”