Why bother with econometrics when revealed truth will do?

Reader Rick Stryker comments on my post on employment effects of the minimum wage:

If we compare to the CBO study, we see they get an estimate of 500K with an upper bound estimate of 1 million, which is a lot smaller than my back of the envelope. The reason for that is that CBO makes many downward adjustments to the published estimates. For example, they use an elasticity of -0.1 as their central estimate, based on their judgmental reading of which papers they believe are more accurate. They also claim there is publication bias and so adjust downward. And they also make a number of downward adjustments by trying to estimate the number of people affected, etc.


I don’t believe these non-transparent adjustments are very credible. …

Let’s take a look at where this supposed conventional wisdom lies in the context of the extant estimates, as reported by Hristos Doucouliagos and Tom D. Stanley, “Publication Selection Bias in Minimum-Wage Research? A Meta-Regression Analysis,” British Journal of Industrial Relations 47.2 (2009): 406-428. [ungated working paper version]. I illustrate where Rick Stryker’s preferred estimate lies in this familiar funnel graph, which plots 1/standard errors (1/se) of an estimate against the point estimate. Observations higher on the graph are more “precise”, as measured by the standard error of the estimate. 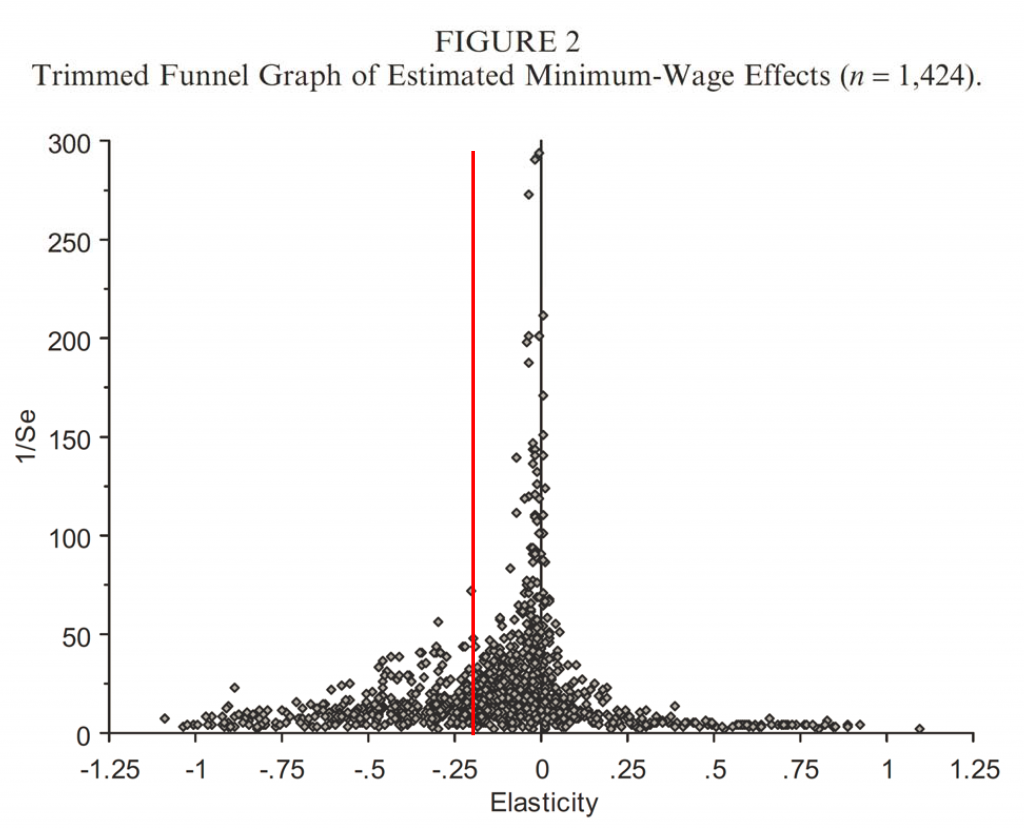 I have drawn the red line at the reader’s preferred estimate of -0.2. Now it is true that these estimates in the funnel graph pertain to elasticities for differing groups — not all for young workers. Still, just looking at all these estimates, I would be tempted to focus on an elasticity of around -0.05, rather than -0.2 — but that’s just me. (I invite readers to vote by commenting, with explanation.)

By the way, if one is interested in the methodology of meta-studies, one of the authors of this paper, T.D. Stanley, has an article in the Journal of Economic Perspectives exactly on this subject: Stanley, Tom D. “Wheat from chaff: Meta-analysis as quantitative literature review.” Journal of economic perspectives (2001): 131-150.

So, for me, I think the assessment of small or zero impacts is the most reasonable (and I am willing to entertain positive impacts, especially in the short run when income effects are more plausible).

Update, 3/30 1:25PM Pacific: I strikes me that people might want to know what the result of the meta-analysis is for the point estimate. From the article:

The one difference between the best-set and the all-set MRA results is that the latter suggests the existence of a very small, but statistically significant, negative minimum-wage effect. A 10 per cent increase in the minimum wage reduces employment by about 0.10 per cent (see column 4 of Table 3). But even if this adverse employment effect were true, it would be of no practical relevance. An elasticity of -0.01 has no meaningful policy implications. If correct, the minimum wage could be doubled and cause only a 1 per cent decrease in teenage employment.