Increases in oil production in the United States and the Middle East were certainly key factors in the huge drop in oil prices over the last year. Nevertheless, one can’t help but be struck by the fact that the weekly changes in oil prices correlate with dramatic moves in other commodity and financial markets. 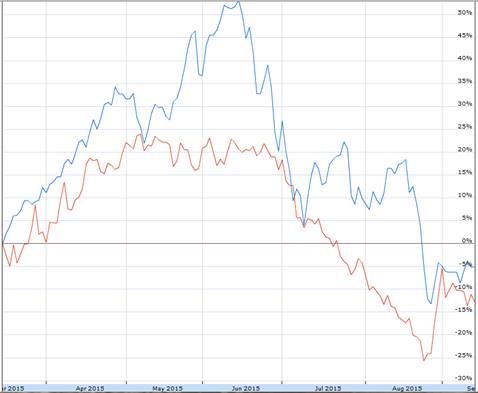 Comparing September 4 values with those at the start of July 2014, copper is down 34.3% (logarithmically), the dollar is up 19.3%, and the 10-year yield is down 52 basis points. Based on the above regression, you’d expect we would have seen a 41.8% (logarithmic) decline in the price of crude oil, or that the price of oil would have fallen from $105 to $69. In fact on September 4 oil was at $46. So certainly more was going on than just changes in the broader global economy. But just as certainly, the latter played an important role in the slide of the price of oil.

The solid black line in the graph below plots the dollar price of WTI since the start of 2014, while the dotted blue line gives the price that is predicted by the above regression for each week since July 2014 based solely on what happened to copper prices, the exchange rate, and interest rates during that week. 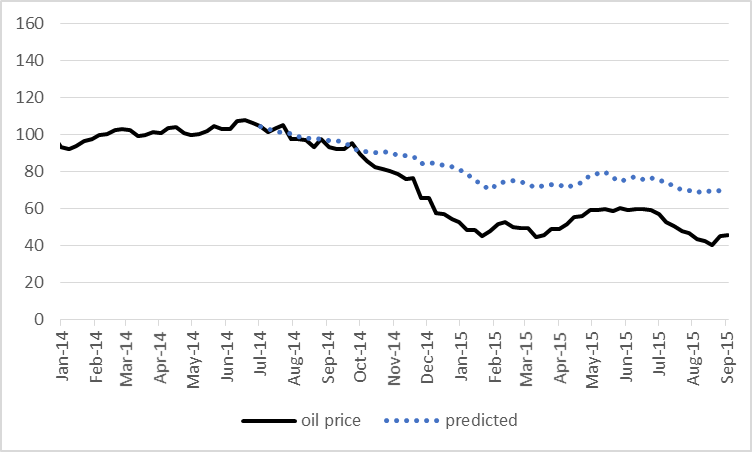 This doesn’t mean that you could have predicted in July 2014 that oil prices were about to plummet, unless you also somehow could have predicted that copper prices, long-term interest rates, and other countries’ currencies were about to do the same. But given what happened in global markets, much of what’s happened to oil prices is not that surprising.

You might try to make a case that developments in oil markets are the cause of the moves in the other variables. The growth in U.S. oil production will ease the trade deficit, which would be one factor in a stronger dollar. And the decline in oil prices will help keep inflation low, which contributes to a lower nominal interest rate. But I believe any such effects could only be a very minor part of the movements we’ve seen in interest rates and the exchange rate. Instead, the real story has been weakness of the world economy. I therefore interpret the above calculations as telling us that gains in oil production from the United States and OPEC are only part of the reason that the dollar price of oil has fallen so much over the last year and a half.

If you’re curious to use calculations like these to take a look at other starting and ending dates, this little tool developed by Ironman makes it easy to do. Just input the four prices at your chosen starting date and ending date and press calculate. It’s set up with default values (if you just press “calculate” yourself without entering any numbers) to reproduce the calculations I just described based on the change in prices between July 4 and September 4. And below the tool you’ll find some self-updating widgets to follow the current prices. Enjoy!

Commodities are powered by Investing.com

19 thoughts on “Common factors in commodity and asset markets”