The way in which the Federal Reserve controls the short-term interest rate today is completely different from the way things worked ten years ago. I was looking for a good description of how the current system works and couldn’t find one, so decided to write my own.

At each meeting the ECB sets two key interest rates. The first is a rate at which it offers to make short-term loans to banks. The ECB can lend as much as it wants because to extend a new loan, the ECB simply credits the bank with new funds in the bank’s account with the ECB. An offer by the ECB to lend as much as banks want at a fixed rate puts a ceiling on the interest rate on short-term loans between banks. Why should I pay 2% interest to borrow from another bank when I could borrow from the ECB for only 1.5%? The second interest rate that the ECB chooses is the interest rate it pays to banks on funds left in their account with the ECB overnight. This essentially put a floor on the interest rates on loans between banks. Why should I lend to another bank for 0.5% if I could get 1% by just leaving my funds with the ECB? If the ECB sets a lending rate of 1.5% and a deposit rate of 1%, short-term loans between banks should take place at a rate somewhere between the 1.5% ceiling and 1% floor. 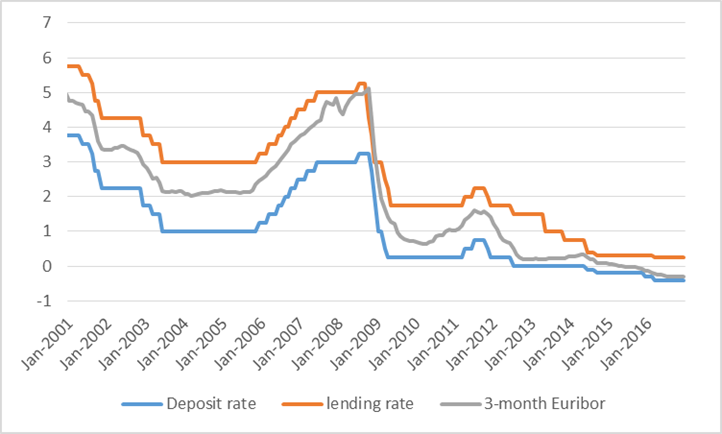 Average interest rate over the month on 3-month interbank loans (in gray) and end-of-month values for ECB deposit rate (in blue) and lending rate (in orange), January 2001 to December 2016.

Since June of 2014, the ECB wanted to bring interest rates into negative territory. It did so by charging a fee instead of paying interest on deposits with the ECB. Today European banks are willing to pay the borrower for the privilege of being able to make a loan, because by passing the ECB deposits along to someone else they could avoid the charge from the ECB (more details here). If you weren’t paying attention to the units on the vertical axis, you’d think the system is functioning just as it always did, with the equilibrium interest rate on loans between banks falling between the ceiling and a now-negative floor. 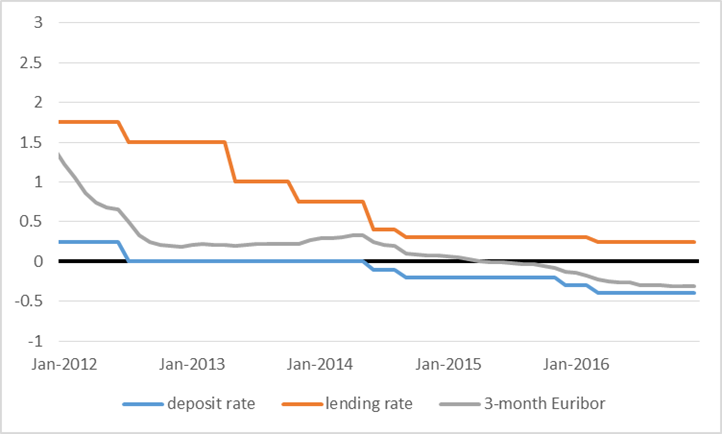 Average interest rate over the month on 3-month interbank loans (in gray) and end-of-month values for ECB deposit rate (in blue) and lending rate (in orange), January 2012 to December 2016.

In the new regime of U.S. rate hikes beginning in December 2015, the Federal Reserve at each meeting has also been announcing two key policy rates. One is an interest rate that the Fed will pay a bank for excess funds left overnight in the bank’s account with the Fed. Since March 16 that number has been 1% at an annual rate. The second policy rate is an interest rate that the Fed will pay on reverse repo operations. These are essentially collateralized overnight loans from financial institutions to the Fed– see this discussion for more details. The reverse repo rate has been 0.75% since March 16. The effective fed funds rate, a volume-weighted average of brokered overnight loans of Fed deposits between financial institutions, is currently at 91 basis points, in between the reverse repo rate and the interest rate on reserves. 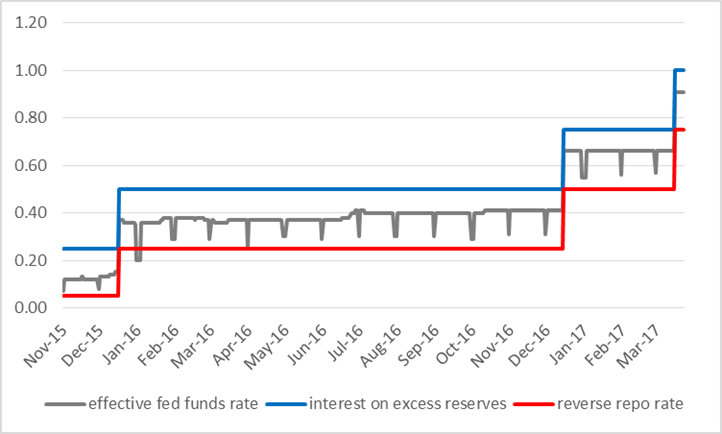 Daily interest rate (quoted at an annual rate) paid by Fed on excess reserves (in blue) and on reverse repos (in red) along with daily effective fed funds rate (in gray), Nov 1, 2015 to March 23, 2017.

The last graph looks similar to the ECB system, but there’s a profound difference. The blue line in all three figures is the interest paid by the central bank (either the ECB or the Fed) on deposits left overnight with the central bank. But whereas this functions as a floor in the European system, it appears to be the ceiling in the U.S.! Returning to the logic of the European system, why would a bank lend to another bank for 91 basis points when it can earn 100 just by leaving the funds in its account with the Fed?

The answer is, for the most part they don’t. Most of the institutions lending fed funds today are not private banks, but are instead government-sponsored enterprises (GSEs) such as the federal home loan banks. The GSEs have accounts with the Fed but don’t earn interest on their reserves. The GSEs can lend those funds to other financial institutions over the fed funds market, or they can lend those funds to the Fed through the Fed’s reverse repo operations. For this reason, the 75 bp reverse repo rate, not the 100 bp rate for interest on reserves, functions as the effective floor for the fed funds rate in the current U.S. system.

But isn’t there a money-making arbitrage opportunity here for private banks to borrow from the GSEs at 91 bp and earn 100 bp by holding those funds overnight in their account with the Fed? It turns out this isn’t the golden deal it might appear to be as a result of some regulatory details. One is that the Federal Deposit Insurance Corporation assesses banks a fee based on their total assets (which include deposits in the banks’ accounts with the Fed). If a bank borrows from a GSE and holds the funds as Fed deposits, it will have to pay more to the FDIC. A recent study by Fed economists Ayelen Banegas and Manjola Tase found those fees averaged about 11 basis points in 2011 and 7 basis points in 2014. So a private U.S. bank can’t make money borrowing fed funds from a GSE unless it can get them for about 90 basis points.

What about foreign banks, some of which also hold U.S. Federal Reserve deposits and could earn the full 100 basis points, but don’t have to pay the FDIC fee? They have been playing an increasing role in borrowing from GSEs on the U.S. fed funds market. But their ability to arbitrage turns out to be limited by other regulatory constraints such as Basel III. If a foreign bank borrows more fed funds, its calculated risk-exposure may increase, forcing it to adopt other costly measures to stay within capital or liquidity requirements. So they too aren’t interested in borrowing fed funds from the GSEs unless they can get them at a discount from the 1% interest on reserves.

How the Federal Reserve controls the fed funds rate today is thus a fairly complicated story. And I guess that’s why it’s hard to find (or write) a simple description of exactly how it works.

14 thoughts on “How the Federal Reserve controls interest rates”