That was the title of a conference organized by Istituto Affari Internazionale (with support of the Italian Ministry of Foreign Affairs and International Cooperation and Banca d’Italia) that I attended a couple of weeks ago in Rome.

The conference brought together scholars from seven think tanks from the G7 countries (CEPII/France, Chatham House/UK, CIGI/Canada, IAI/Italy, JIIA/Japan, Kiel/Germany, PIIE/US), to present their views on how best to address challenges in the coordination of macroeconomic, trade and financial regulatory policies (papers here). I must confess that at the time, I found the conference proceedings simultaneously fascinating and anxiety-provoking. Clearly, this is a time when we are confronting serious policy problems, and that is always stimulating from an intellectual perspective. On the other hand, many of the problems are self-inflicted; in this case they include the economic policy uncertainty arising from Brexit, and more importantly, from the alternatively incoherent policy proposals emanating from the Administration (or ill-advised when they are coherent).

Several of the papers suggested coordinating investment, both private and public (the latter in infrastructure) as a means of accelerating sustainable growth (read growth in potential output). This makes eminent sense on economic grounds — both types of investment have been depressed relative to expected or desired since the end of the last recession. Short term multipliers for infrastructure investment are typically higher than for government consumption. Over the longer term, augmentation of the net infrastructure stock (either through new investment or maintenance) seems to have large effects.

But higher private investment growth is going to be hindered by high economic policy uncertainty (even if the slow economic growth was the primary factor dragging investment before). And if public-private partnerships are going to be the main mode of undertaking infrastructure investment, then uncertainty is not helpful there. 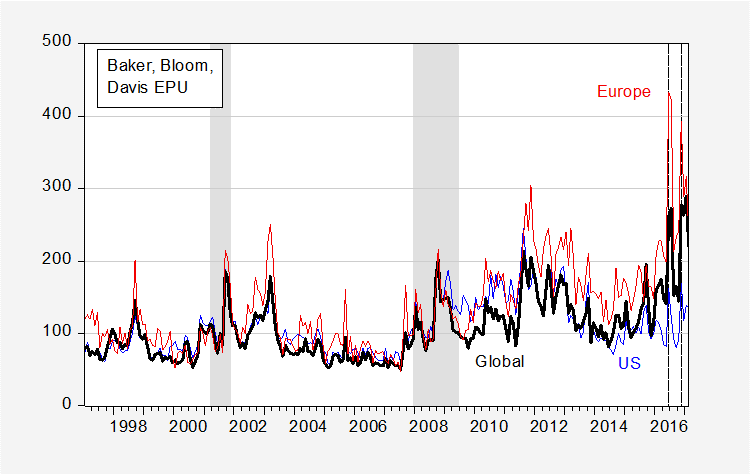 Overarching all the discussions was the issue of how to coordinate any policies when uncertainty is so high. And I’ll go further and say the uncertainty is particularly high when it’s clear the US administration is itself deeply divided on the path forward.

Now, as of yesterday, we seem to have a remarkable turn of events. No longer does China appear to be a currency manipulator, wholesale exit from NAFTA is off the table, a drastic change in the composition in the Fed Board less likely, and so forth [1] That being said, the fact that the President can change his mind so swiftly on some issues he so vociferously campaigned upon can be taken in (at least) two ways: (1) he has made a decisive change to accommodate facts and reality, or (2) he is subject to changing his positions on a whim. If the latter is more the truth, then economic policy uncertainty could remain very high. (Consider, first health care reform is critical, then we’re on to tax reform, then we’re back to health care reform, now tax reform is going to be some time off…)

The conference agenda is here, and the think tank papers are here. My comments are here. The discussant comments (by Richard Cooper, Giancarlo Corsetti, Claudio Borio, Richard Portes, and Iain Begg, among others) to be published later.

5 thoughts on ““Major Challenges for Global Macroeconomic Stability: The Role of the G7””