Today we are pleased to present a guest contribution written by Hal Varian, Emeritus Professor at the School of Information, the Haas School of Business and the Economics Department at UC Berkeley.

In a recent post on this blog Simon van Norden writes:

As an example, he refers to data from my 2012 paper with Hyunyoung Choi, “Predicting the Present with Google Trends.” In that paper we predict contemporaneous initial claims for unemployment benefits using Google query categories on “Jobs” and “Welfare and unemployment”.

How different is the data extracted in 2011 from that extracted in 2017? This is easy to answer, since we created a data appendix that contains the data used in the 2011 analysis. Here are the necessary steps.

Here is what I get for the Welfare indices. (I leave the analysis of the Jobs data to the reader..) 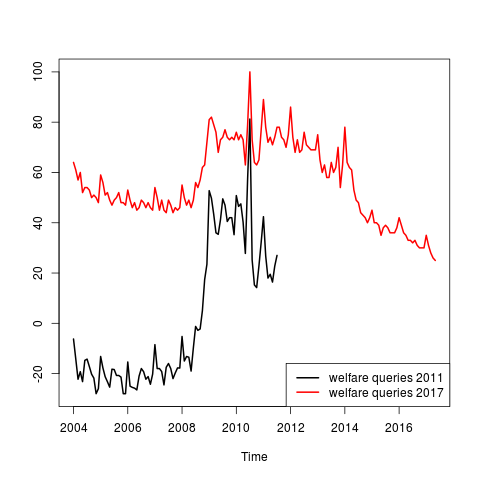 t is not hard to see that the black line is simply a stretched and shifted version of the red line. To check this, just run a regression of the 2017 data on the 2011 data and plot the fitted values. It is apparent from the figure below that the two data series are approximate linear transformations of each other and that the 2011 and the 2017 data are similar once one corrects for the shifting index. 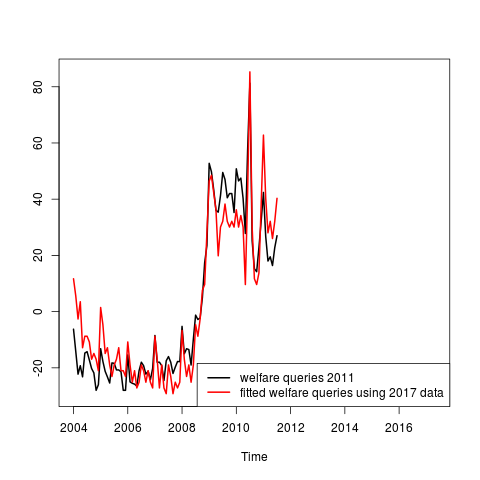 This is true not only for the seasonal component, but also for the large scale features of the data such as the major jump at the beginning of the recession.

Of course there are some minor difference in the data depending for the reasons mentioned above. This is also true of government statistics since they are typically revised several times before being finalized. For this reason, it is good practice to save the data used at time of estimation, whether working with Trends data or with government data.