Holding to the Old Faith 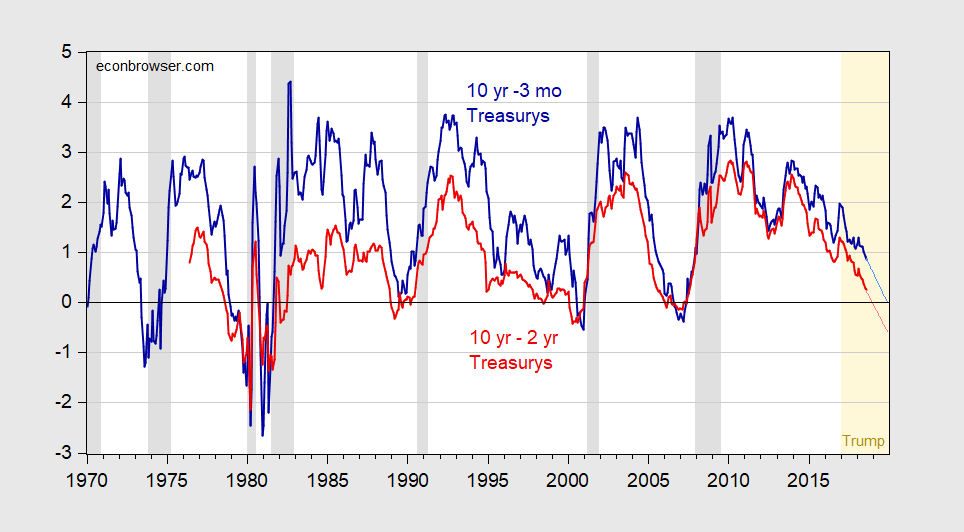 In Chinn and Kucko (2015), we document the predictive power of these spreads for recessions. In today’s SF Fed’s Economic Letter, Michael Bauer and Thomas Mertens follow up on their previous study, and conclude:

The three long-term spreads and the one short-term spread all have very similar predictive accuracy, with AUCs of 0.85 to 0.89. The traditional 10y–3m spread performs better than the other three spreads by a slight margin. We also assess our predictors over a sample period that excludes the so-called zero-lower-bound period, when short-term interest rates were essentially zero (2009–2015) to give the best possible chance to the short-term spread, as did Engstrom and Sharpe. This helps its relative performance and puts it about on par with the 10y–3m spread. Engstrom and Sharpe found that their short-term spread statistically dominated the 10y–2y spread, and our findings are consistent with this result. However, we also show that the traditional 10y–3m spread is the most reliable predictor, and we do not find any evidence that would support discarding this long-standing benchmark as a measure of the shape of the yield curve. It is worth emphasizing again, however, that all of these term spreads are fairly accurate predictors and quite informative about future recession risk; the differences in forecasting accuracy are small.

So, while I see the merit of looking at several indicators, and can see that in a horse race other spreads might marginally outperform (in particular) the 10yr-2yr spread, when one spread inverts, that is going to be highly suggestive.

The 10yr-3mo spread will, at the current pace, go below zero in December 2019. Assuming a recession follows within a year, that suggests a recession by December 2020.

48 thoughts on “At the Current Pace, the 2-10 Will Invert in December”