CEA Chair Kevin Hassett has stated a recession by next summer is impossible. I’m wary of such definitive statements.

“The data are pretty clear that we are not in a recession,” Council of Economic Advisers Chairman Edward Lazear told a meeting of editors and reporters from the Wall Street Journal and Dow Jones Newswires.

“I would be very surprised if the NBER, looking back at this period, would date this as a recession,” Mr. Lazear said. There are even indications that revised first-quarter estimates would be slightly stronger than 0.6%. “The optimists seem to have been closer to right on that than the pessimists,” he said.

From a September 2008 article by Donald Luskin of Trend Macrolytics (and a supporter of Stephen Moore’s candidacy for Fed Governor):

Things today just aren’t that bad. Sure, there are trouble spots in the economy, as the government takeover of mortgage giants Fannie Mae and Freddie Mac, and jitters about Wall Street firm Lehman Brothers, amply demonstrate. And unemployment figures are up a bit, too. None of this, however, is cause for depression — or exaggerated Depression comparisons.

Overall, the pessimists are up against an insurmountable reality: In the last reported quarter, the U.S. economy grew at an annual rate of 3.3 percent, adjusted for inflation. That’s virtually the same as the 3.4 percent average growth rate since — yes — the Great Depression.

For the record, NBER dates the beginning of the recession at December 20172007, five months before CEA Chair Lazear’s statement, nine months before Don Luskin’s admonition.

The Yield Curve — Prescient or Not?

A conventional 10yr-3mo term spread model implies about 31% probability of recession in a year (Lenoel/NIESR). What about statements like, “this time is different” for the yield curve…? I have more sympathy for this view, although I’m still worried. One of the reasons that is offered for putting less weight is the argument that yield curve is less informative due to quantitative easing. To see this argument, consider the following expression for the long yield:

The long yield is the sum of two components: (i) EHTS, expectations hypothesis of the term structure, and (ii) tp, the term premium (Benzoni et al. (2018) further decompose the term premium.) The first component is the relevant one for predicting the business cycle. A long rate is the average of the expected short rates, so a EHTS component lower than the current rate means expected rates are lower than the current rate. However, the EHTS component is unobservable, so this is not a directly testable proposition. However, an average positive term premium is consistent with on average upward sloping yield curve, which is what is observed. Figure 1 displays the term spread and the EHTS over the past two decades. 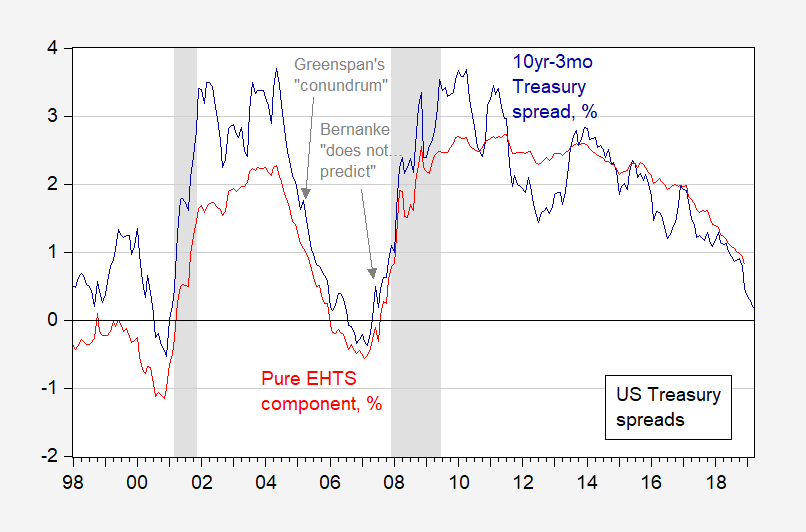 Recall, in 2006-07, the “conundrum” — attributed in part to foreign central bank demand for US Treasurys — was tagged as a reason for believing the inversion would not signal a recession, by both Greenspan and Bernanke. Yet, in a sample including the 2007 recession, Chinn and Kucko still found inversions an empirical determinant.

In principle, quantitative easing/credit easing in the form of Fed purchases has the same impact as foreign central bank purchases of Treasurys. Hence, the relevant question is whether the EHTS component is at the same level as that before the last recession. The answer is no. Johanssen (2018) notes that using the adjusted term spread leads to lower estimated probabilities of recession.

In fact, as of December, the EHTS component is 1 percentage point above zero, compared to it breaching 0% in January 2006. An alternative term premium estimate from the NY Fed yields a similar pattern.

Indicator Variables Recorded As of Today 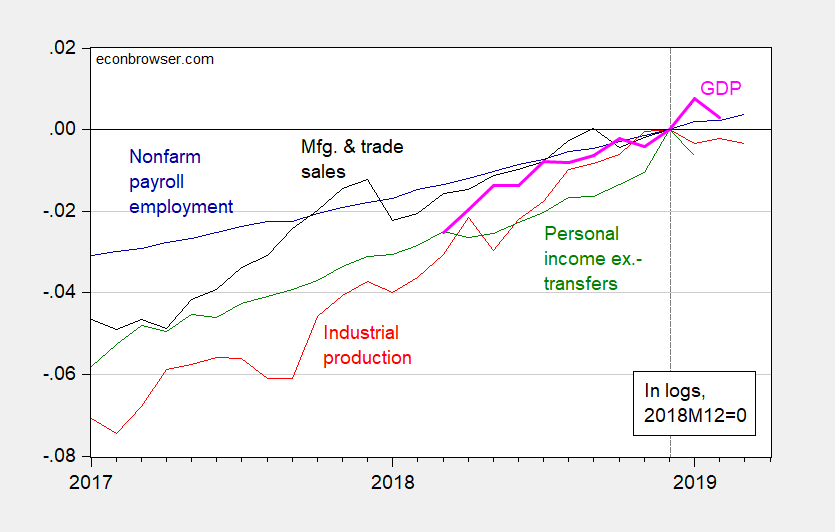 If one compares this graph to the one I generated at the beginning of the spring semester (1/19), one will see that in that previous graph, all series were strongly rising. No longer true…

Housing remains on a positive track, with nominal indices still rising, albeit modestly. In real terms, prices are flat. 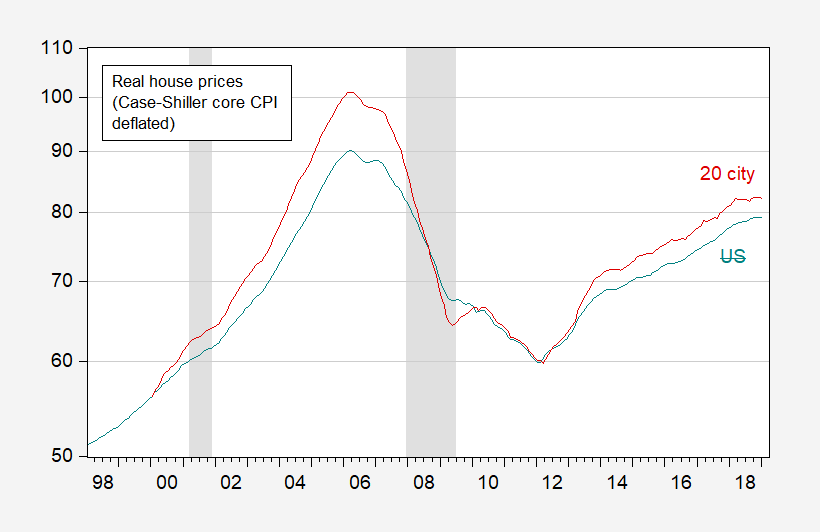 This should put a crimp on consumption, given stabilization in real household wealth.

This is what keeps me awake at night. Conservatives used to focus on the fact that the extended period of Fed stimulus meant that the Fed funds rate was low, meaning little room for stimulative rate cuts. This is shown below:

With the natural rate of interest likely to remain low, it’s likely that monetary authorities will hit the zero lower bound before being able to deliver much stimulus.

Personally, I worry more about the lack of fiscal space. The Tax Cut and Jobs Act — a paragon of how not to conduct counter-cyclical fiscal policy — combined with the omnibus spending bill blew an enormous hole in the US budget. This is shown in the CBO depiction of the budget outlook for FY 2018, going from June 2017 to April 2018. 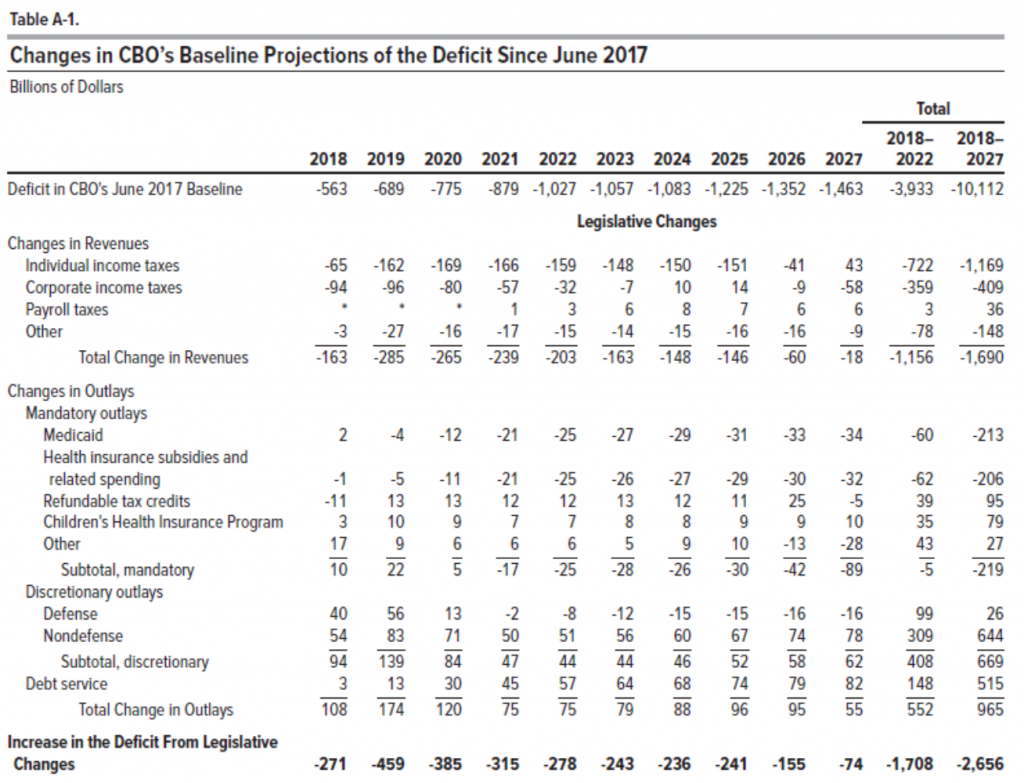