The gap between long-term and short-term interest rates has narrowed sharply over the last year and is now dipping into negative territory. Historically that’s often been a signal that slower economic growth or even an economic recession could lie ahead. This relation is sometimes summarized with a regression that tries to predict average real GDP growth over the next year as a function of recent GDP growth rates and the current interest-rate spread (t-statistics in parentheses):

Here Yt is 100 times the natural log of real GDP in quarter t and i10y and i3m are the 10-year and 3-month interest rates, respectively. The coefficient of 0.52 on the interest-rate spread means that the fall in the spread of about 200 basis points since the end of 2015 would lead us to expect about 1% slower GDP growth over the next year than we otherwise would.

The picture is pretty scary. But the graph invites us to conclude that a positive spread between long-term and short-term rates is the normal condition, and that it’s an unusual situation if the spread disappears. The historical experience is certainly consistent with that conclusion; the spread has averaged nearly 150 basis points since 1952. A positive average spread means that investors will usually earn a higher return by holding long-term bonds rather than short-term bonds, presumably as compensation for some kind of risk.

Modern finance theory interprets risk premia in terms of the covariance of the asset’s return with other developments that affect investors’ overall income. In the 1970s, inflation was a key risk factor for bonds and other assets. Most assets, and bonds in particular, did poorly in response to the inflation shocks of the 1970s. In that environment, bonds did especially badly in the state of world when investors were most keen to preserve their wealth. That presumably was one factor in the extra compensation that investors demanded for holding long-term bonds in the 1970s.

By contrast, in the current environment, an important risk factor is deflation. A downturn in global real economic activity that brings inflation down will hurt almost every investment you could make, with one exception– long-term bonds will do well. By investing in long-term bonds, you’re actually buying insurance against a possible bad outcome on other investments. If bonds pay off in the one state of the world where you really want to preserve your wealth, they might actually offer a lower expected return than an investment like a short-term Tbill, if people are willing to sacrifice some expected return in order to have insurance against a deflationary shock.

If you have a model that predicts future interest rates, you could use it to calculate the term premium, defined as the extra return you can expect to earn from holding long-term compared to rolling over short-term securities. Of course, that calculation is very sensitive to the model that you use to predict returns. One model that’s very popular among academic researchers and practitioners was developed by Tobias Adrian, Richard Crump, and Emanuel Moench. One reason for its popularity is that anybody can download daily updates. Below is a plot of the Adrian, Crump and Moench estimate of the term premium on 10-year Treasury bonds. It was very large and positive in the 1970s. In other words, this was a period when, according to the model, on average you’d do much better investing long term. But the term premium has become negative in the most recent data. According to the model, your expected annual return today is actually higher if you buy a Tbill rather than make a long-term investment. 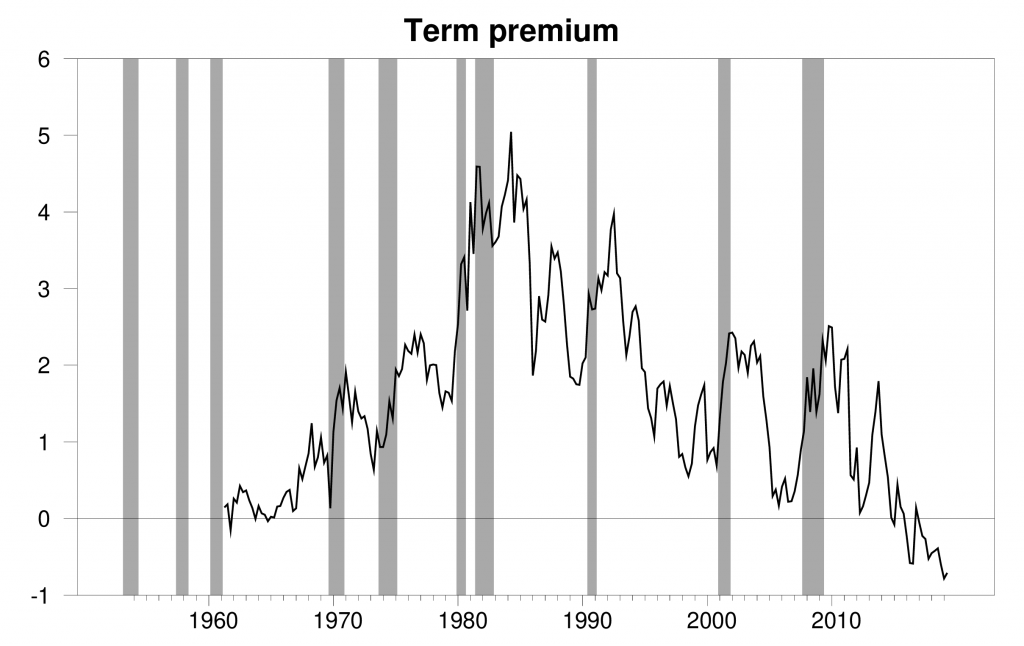 One way to investigate the importance of this issue is to estimate the regression above not with the full sample of data, but instead with a subsample of the most recent 10 years of data observed as of the year before date T + 4 for T + 4 running from 1963:Q2 through 2019:Q1. The coefficient on the spread in these regressions is plotted in the graph below. The spread was a much more useful predictor of GDP growth in the 1970s than it has been over recent decades. 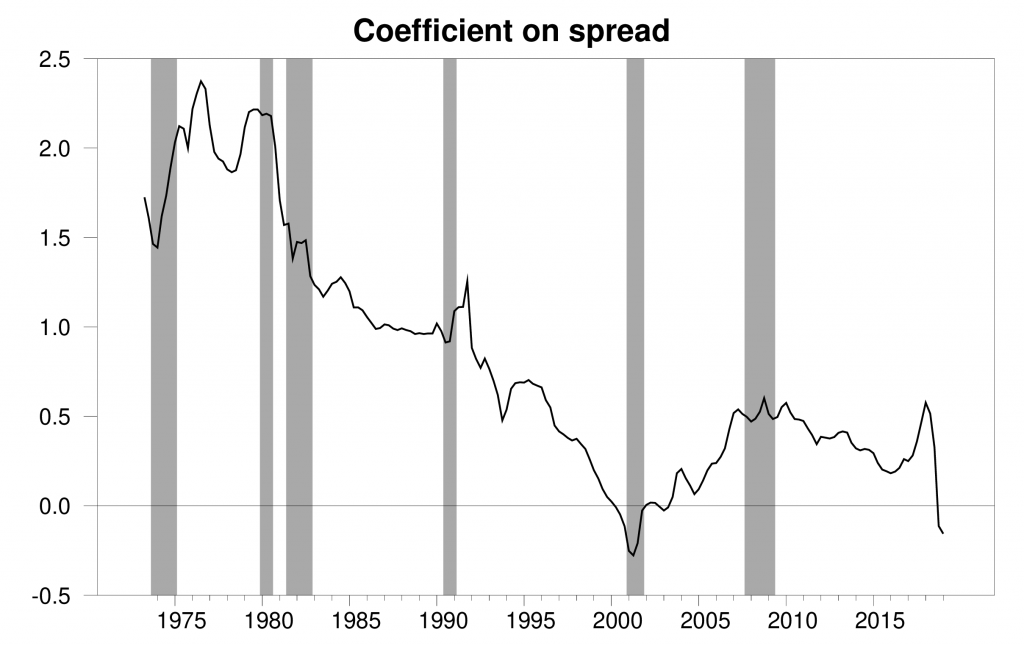 Coefficient on spread for regression using the most recent 10 years of data as of each indicated date.

In fact, if you used only the most recent observations, the coefficient is actually negative. Taken literally, it means that when the yield curve inverts you’d actually expect faster GDP growth. However, the effect is completely insignificant statistically.

Another way to express this visually is to subtract the term premium from the spread, as is done in the graph below. This measure reached negative territory before each of the last 6 recessions. But we still have another 80 basis points to go before we get there this time around. 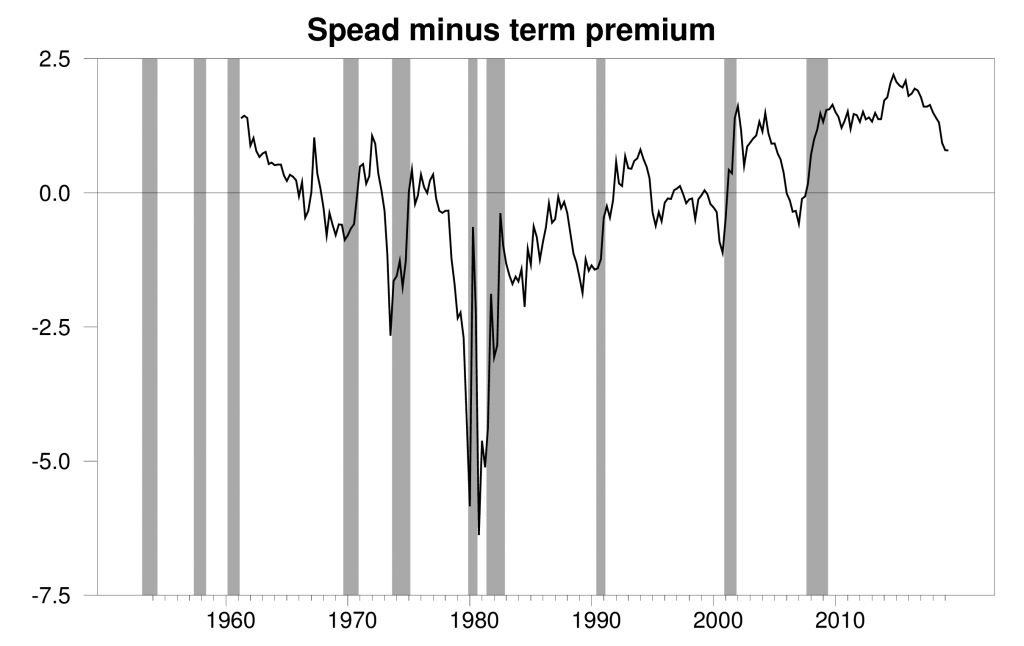 The graph plots the difference between the variables plotted in the first two graphs, with i10y in the first graph replaced by the predicted 10-year rate from the ACM model.

Let me emphasize that I do not believe the negative coefficient in the most recent data, and I think it would be imprudent to completely dismiss the evidence from the first graph and the full-sample regression. The current flat slope of the yield curve may well signal slower growth during 2019. But it is not as clear and not as dire a signal as some analysts might have you believe.