The Bureau of Economic Analysis announced today that seasonally adjusted U.S. real GDP grew at a 6.4% annual rate in the first quarter, well above the 3.1% average growth that the U.S. experienced over 1947-2019. 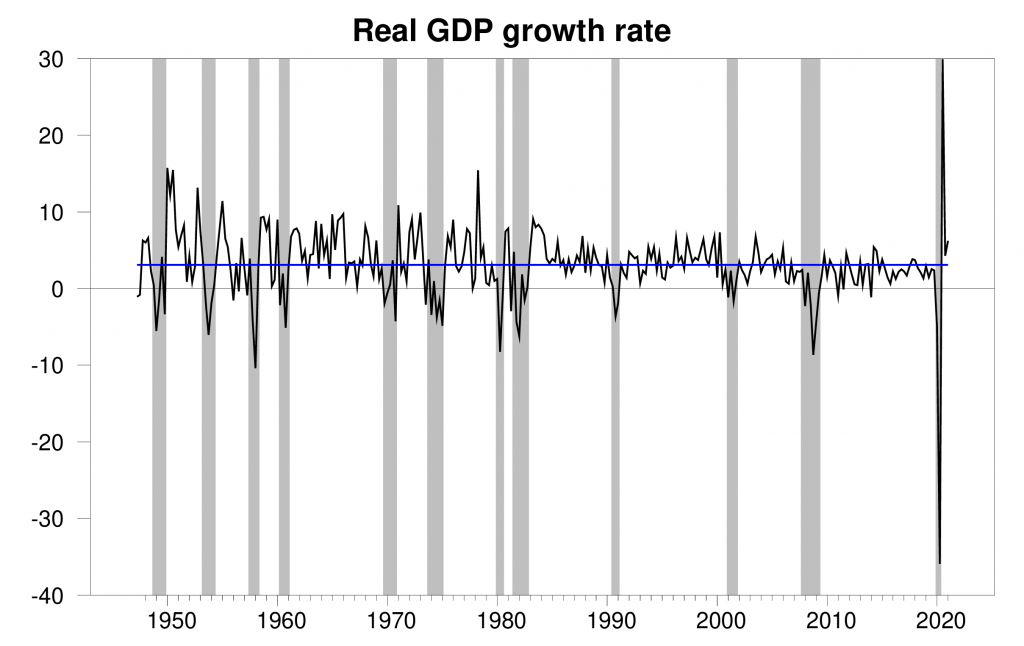 The new data put the Econbrowser recession indicator index at 0.4%, historically a very low value. The number posted today (0.4%) is an assessment of the situation of the economy in the previous quarter (namely 2020:Q4), where we use the additional quarter to allow for data revisions and to gain better precision. This index provides an automatic procedure that we have been implementing for 15 years for assigning dates for the beginning and ending quarters of economic recessions. As we announced on January 28, the COVID recession ended in the second quarter of 2020. 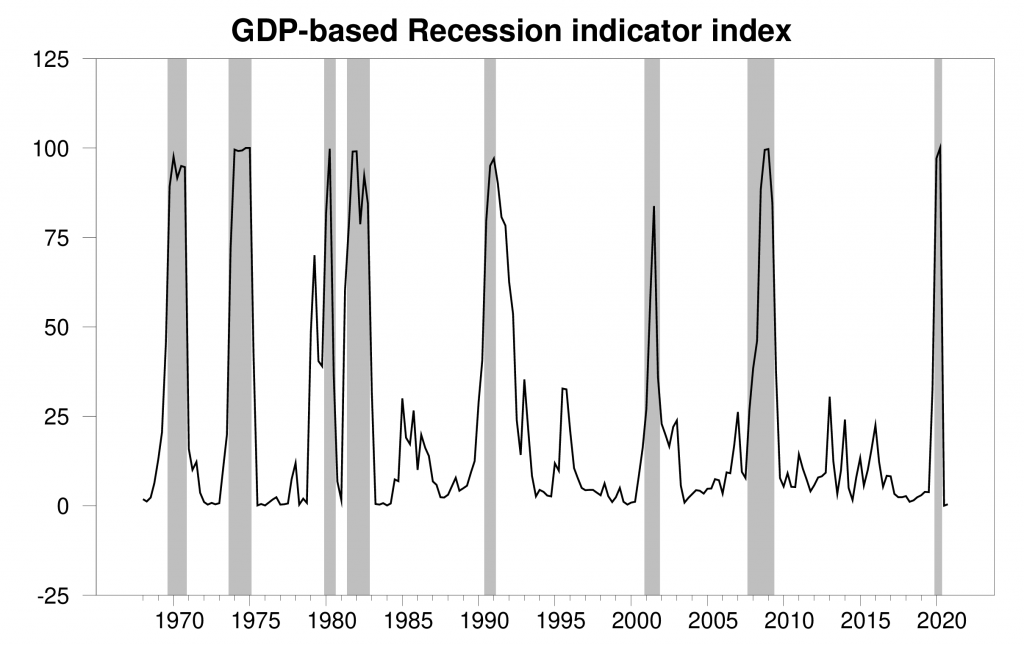 GDP-based recession indicator index. The plotted value for each date is based solely on the GDP numbers that were publicly available as of one quarter after the indicated date, with 2020:Q4 the last date shown on the graph. With the exception of the the end of the 2020 recession, shaded regions represent the NBER’s dates for recessions, which dates were not used in any way in constructing the index. The indicated end to the 2020 recession comes from the algorithm described in Chauvet and Hamilton (2005).

The NBER Business Cycle Dating Committee has yet to issue an official declaration that the recession has ended. I view our mechanical dating procedure as a useful complement to the NBER announcements. Usually (but not always), the algorithm would reach a decision before the NBER issued an official statement. But there are two more important benefits to providing a purely mechanical assessment. First, some might wonder whether this determination of stages of the business cycle is just a matter of subjective judgment. Our statistical approach views recessions as real objective events that we can measure, a development that helps researchers model and characterize business-cycle dynamics. Second, there is always a potential concern that subjective judgments could be influenced by political factors or ideological preconceptions. For example, the NBER determined that the 1990-91 recession ended in March of 1991. But it did not issue this announcement until December of 1992, after the presidential election. It turns out in this case that our algorithm would have been even slower than NBER, waiting to make a call until the 1992:Q4 GDP numbers were released. The reason that our algorithm, like the NBER Business Cycle Dating Committee, was very slow to reach a final conclusion in that episode was that the initial numbers for 1992 GDP were substantially lower than the revised estimates that were subsequently reported. Our algorithm thus provides reassurance that the dates that economists rely on are not influenced by ideological factors.

The Dating Committee may be waiting until the levels of variables like GDP return to their values of 2019:Q4 before the COVID recession began. The 2020:Q1 value is still 0.9% below the value of 2019:Q4. In addition we offer at Econbrowser our own subjective assessment of the economic situation. I expect to see strong economic growth continuing from here, and have elevated the Econbrowser emoticon to

In terms of the breakdown of the Q1 GDP numbers, consumption spending, spurred by more stimulus money, led the way. Direct spending by the federal government also accounted for 0.9 percentage points of the 6.4% annualized GDP growth rate. Private fixed investment made a positive contribution, though this was smaller than the contribution of fixed investment to the 2020:Q3 and Q4 figures. 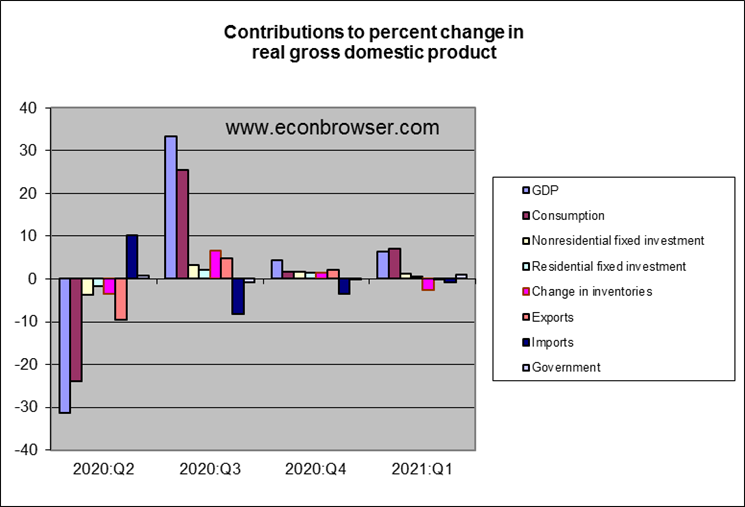 The Federal Reserve reiterated yesterday its commitment to keep interest rates low. That should provide continuing stimulus to house prices and residential fixed investment in 2021.