Some of it – but some indications are that it’s not the majority.

Let’s define the trade balance in NIPA terms, so we look at “net exports”, in this case normalized by GDP.

Where ex is exports, im is imports.

This specification implicitly assumes perfect supply elasticity for exports, and for imports. This seems counterintuitive, but I haven’t found evidence for a time series effect (see this paper). Hence, in my research, I focus on the variations of the above specification [1], [2].

Mr. Kopits makes the assertion that the stimulus is the source of the trade deficit worsening, and the several fiscal packages that have been passed likely increased imports relative to what they otherwise would have been. But certainly the change in autonomous imports (as the pandemic switches consumption preferences toward goods and away from services) has an impact, perhaps as much an impact as the government spending and transfers that increase US personal income. However, as the decomposition makes clear, the decline in RoW GDP also affects the trade balance (as do changes in the real exchange rate – although the trade weighted real dollar is about the same as it was in February 2020).

I’m looking only at this sector, but considering developments in a larger Mundell-Fleming model would not change the conclusions.

One could argue that exports to the rest-of-the-world have been constrained by supply chain issues (or bizarrely, by loss of jobs per Mr. Kopits – so the stimulus caused people to lose jobs so exports couldn’t be produced?). I don’t think there has been much argument that this is a major issue.

Hence, it makes sense to look at the goods imports scaled by nominal GDP. That is shown in Figure 1. 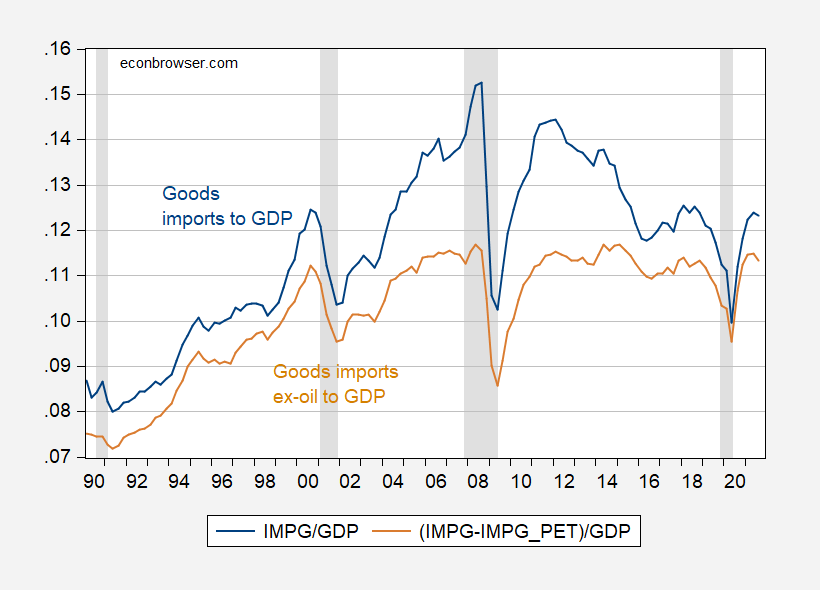 Now, it i2 true that the various packages starting in 2020 have supported consumption; but we would have had a switch toward goods even in the absence of these packages given the public health conditions. Thus, the question is how much of the elevated goods imports is due to the stimulus per se, rather than pandemic conditions.

However, because exports respond mostly to rest-of-world economic activity and the real exchange rate at the business cycle frequency, then the trade balance deterioration (and recent recovery) cannot be wholly attributed to the stimulus, particularly given the less stimulative fiscal policies pursued in many of our trading partner economies.

As a side point, it’s interesting to see how far for instance Long Beach TEU traffic has deviated from trend, as noted in this post, not much for imports. But a lot for exports. 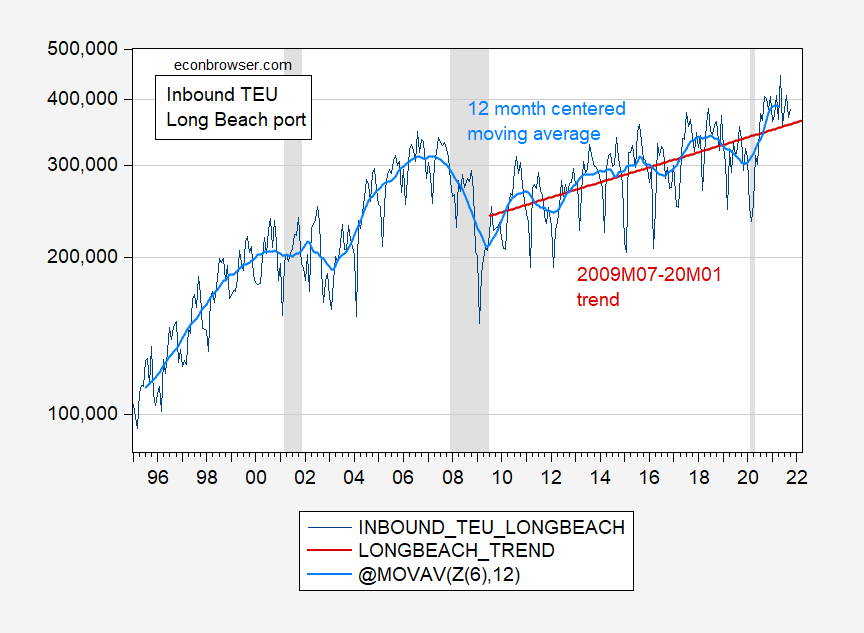 Inbound traffic is above trend, at least as measured by 12 month centered moving average. This is consistent with the view that elevated goods demand is driving some of the logistical issues currently being experienced.

One interesting aspect of the series is that it started declining substantially even before the pandemic struck. That in turn is consistent with tariffs biting on imports, or decelerating growth. On the other hand, outbound traffic has been off-trend for years. 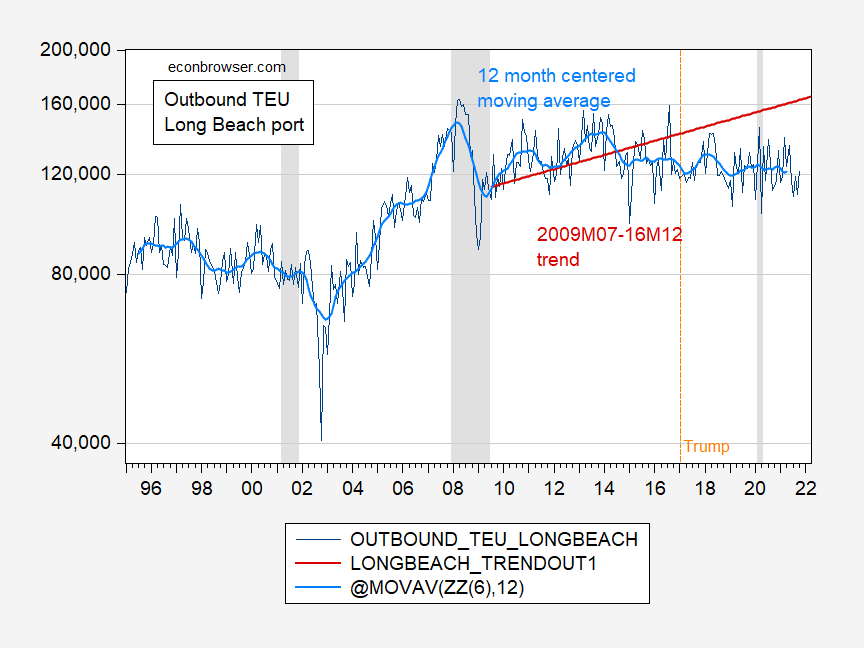 15 thoughts on “How Much of the Trade Deficit Is Government Spending Induced?”