We hear a lot about how expansionary US policy has led to accelerated inflation. Is that inflation much faster than what occurred in other regions? Consider the US, Euro Area and UK 3 month annualized consumer inflation rates (calculated as log differences). 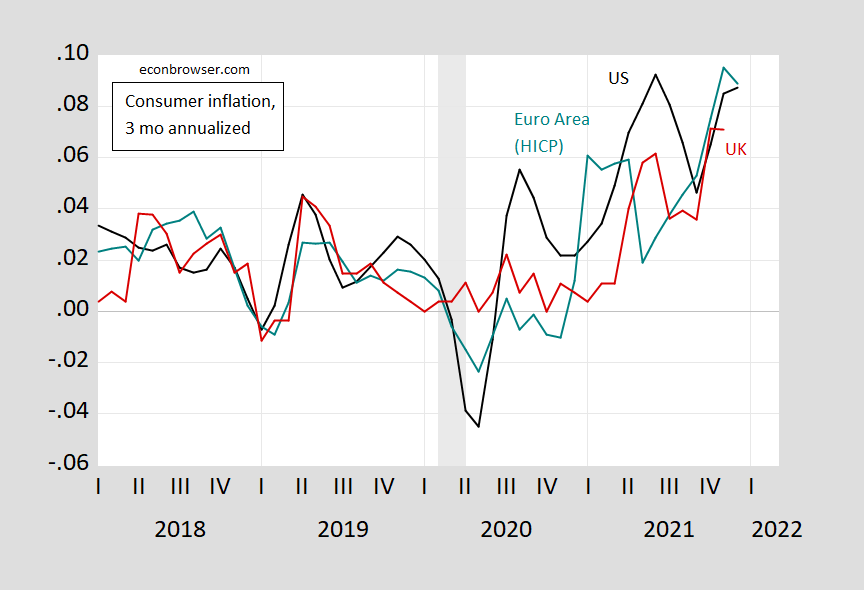 US inflation has recently been higher than that in Euro Area and the UK. But has it been significantly so, either quantitatively or statistically? In order to answer this question, I examine the time difference in the difference between US and Euro Area (US and UK) inflation, going from pre- to post-covid periods. This is an application of the differences-in-differences approach.

Define the annualized month/month inflation difference US vs. country i:

Take this variable and run the following regression:

Where covidt is a dummy variable taking a value of 1 from 2020M02 onward.

So, while it’s true US inflation accelerated a percentage point more than UK, and 0.3 percentage points more the Euro Area, the difference is not statistically significant.

46 thoughts on “Inflation: US vs. Euro Area and UK”