The price of oil has doubled from its value a year ago and could increase much more if there are significant reductions in the quantity of Russian oil that reaches world refineries. This is the first in a series of two posts on what these events could mean for the U.S. economy. Today I focus on the implications for inflation, and in a follow-up post I will discuss implications for real GDP.

Oil prices had already risen quite dramatically before there was any indication of Russia’s intention to invade Ukraine. The factors behind this earlier run-up were similar to the causes behind the surge in many other prices: demand recovered more quickly than production. The same pattern is seen in estimates based on counts of vehicles on the road of the number of miles Americans are driving. This is up 2.5% compared to two years ago. 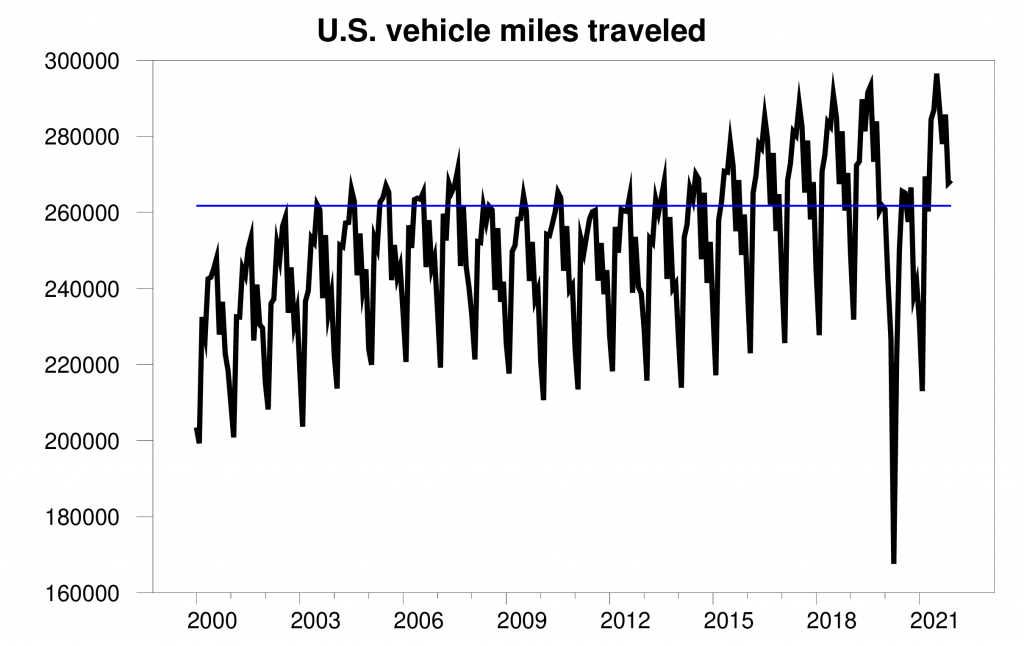 While demand may have returned to pre-COVID levels, supply has not. Even before any of the developments in Ukraine, world production of crude oil in November was 3.3 mb/d lower than its level at the start of 2020. 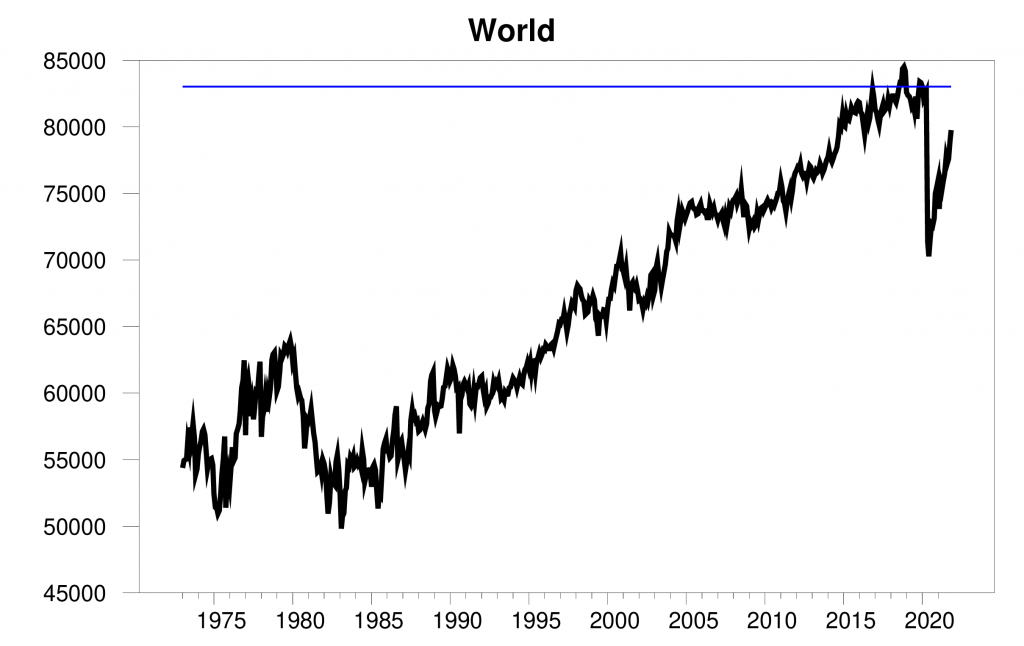 The U.S. supplied a sixth of the world total pre-COVID crude production, but accounts for almost a third of today’s world shortfall relative to pre-COVID. U.S. production is still 1 mb/d below where it had been at the start of 2020. 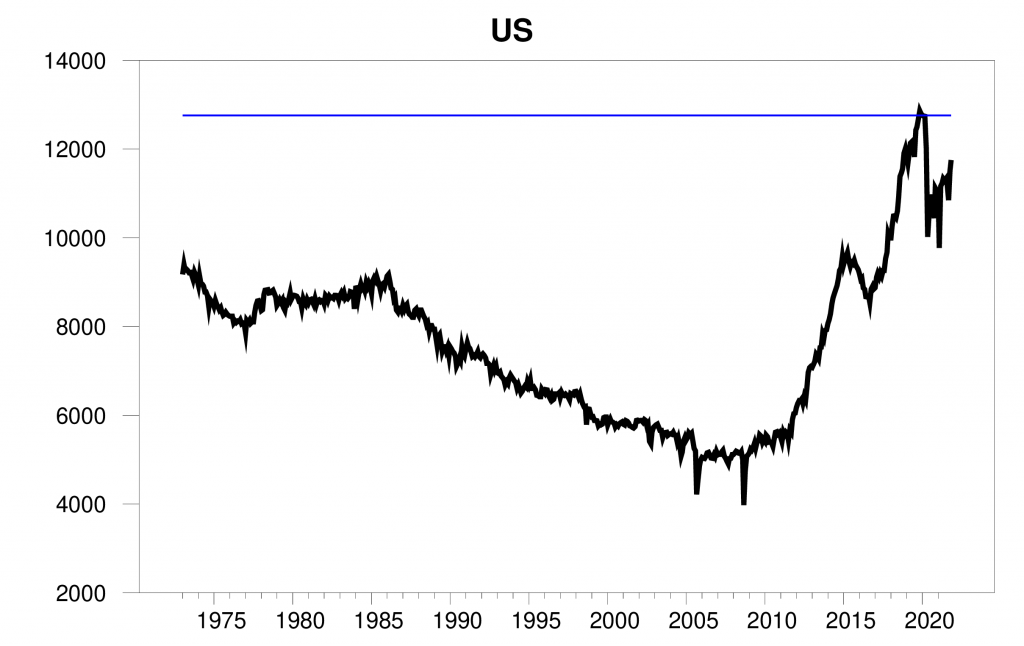 A big part of the story is that it is easier to tear something down than it is to put it back together. The negative oil prices in April 2020 marked a definitive end to some of the enthusiasm for U.S. shale oil production and was followed by a collapse of lending and drilling. Higher oil prices have been gradually but steadily bringing resources back in. That process would continue even without the recent prices over a hundred dollars a barrel, but it takes time. Perhaps by the end of summer U.S. production would be back where it was at the start of 2020.

In 2019, U.S. production and imports of crude oil had a market value equal to about 2% of GDP. That suggests a quick-and-dirty rule for getting an approximate answer to the above what-if question. If we multiply the percent change in the price of crude by 0.02, that should give us a rough idea of what inflation would have been if the change in the price of crude oil was the only source of inflation. This is consistent with the rough rule of thumb used by Fed Chair Jerome Powell that a $10 increase in the price of oil (about a 10% increase at current prices) leads to a 0.2% increase in inflation.

I used that approximation in the figure below to calculate the direct contribution of oil prices to U.S. inflation each month since 1960. This quick calculation suggests that oil contributed about two percentage points to the surges in inflation in 1974 (following the OAPEC oil embargo) and 1980 (followiong the Iranian revolution). Oil contributed 2.6 percentage points to the U.S. inflation rate over the 12 months ending April 2021. 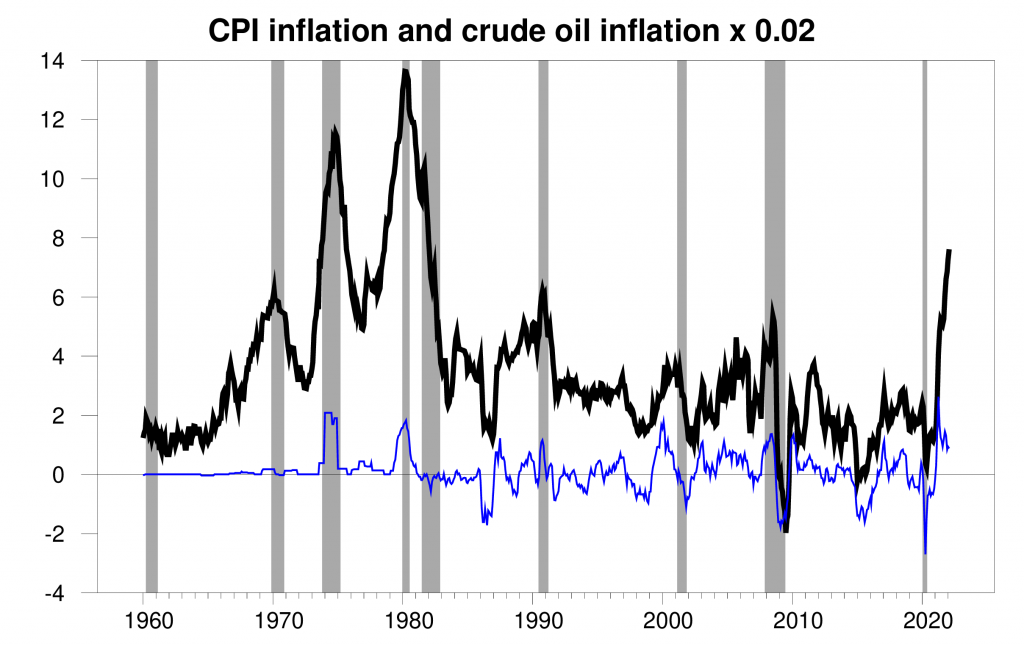 In the 1970s, the contribution of oil in blue is a step-up step-down function — it goes up when oil prices are rising but returns to zero when oil prices stop rising. But the path of actual inflation in black did not follow a step-up step-down function. Instead the inflation rate seemed to be ratcheted up to new higher levels with each spike in oil prices. Monetary policy in the 1970s essentially ratified what would have been temporary surges in inflation, turning them into persistent trends. Two indicators of the mistakes in monetary policy that led to this are shown in the figure below. The top panel plots the real interest rate, calculated as the difference between the nominal fed funds rate set by the Federal Reserve and the year-over-year inflation rate as measured by the CPI. According to policy prescriptions like the rule proposed by John Taylor, the measure of the real interest rate plotted here should increase when inflation rises in order to return inflation to a lower target value. The large negative values for the real interest rate through much of the 1970s are one indicator that the Fed was overdoing the stimulus. The bottom panel provides a second indicator, plotting the growth rate of the money supply as measured by M2. Surges in money growth coincided with the two surges in oil prices in the 1970s and helped these spill over into a more general and sustained inflation. 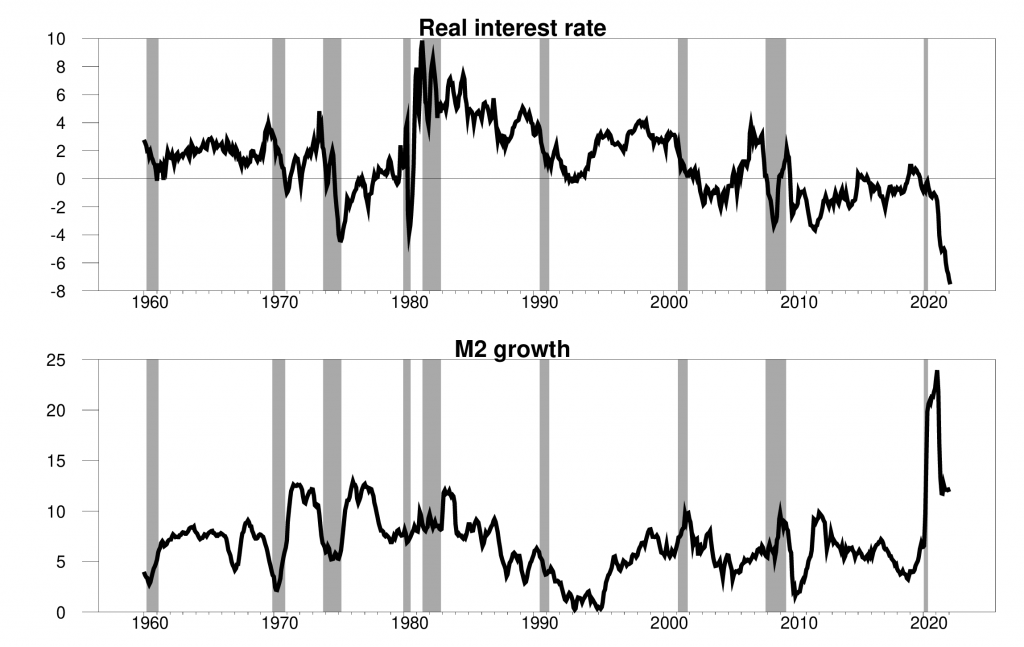 Both of these indicators also send a pretty clear signal that the Fed overdid it during the last year as well.

The Fed’s view was that last year’s price surges resulted from temporary supply problems, of which the developments in the oil market that I described are one example. They hoped (as did I) that we would see significant progress on these supply challenges in the the months ahead. That perspective motivated the Fed’s plan to lift their foot off the accelerator only gradually as this year unfolds.

But given the tragic turn of events in Europe, the supply problems are likely to get much worse before they get better. And that is going to make the Fed’s job a whole lot harder.

175 thoughts on “Oil prices and inflation”