I’m giving a presentation on what determines Wisconsin exports. Here’s an interesting finding – since 2018, real goods exports have underperformed what would’ve been expected based on rest-of-world GDP and the real value of the US dollar. 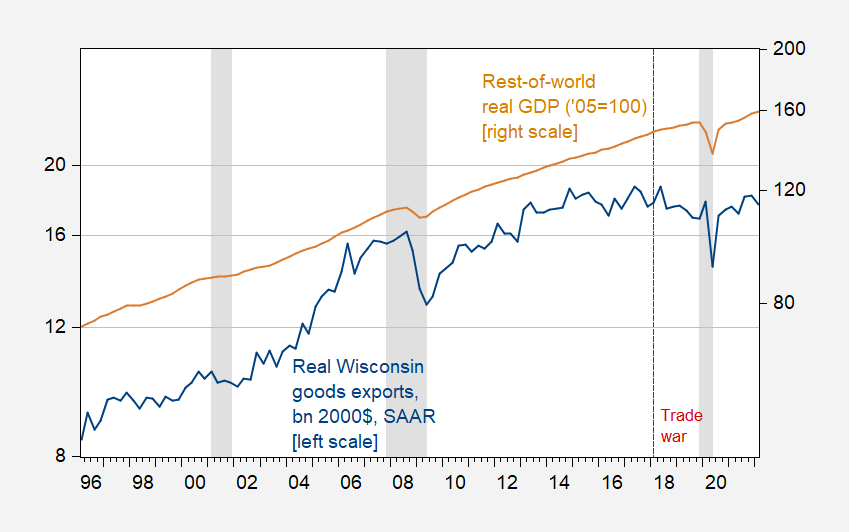 I use an error correction model involving exports, rest-of-world GDP, and the real exchange rate, estimated 1996-2017. The long run elasticity of Wisconsin goods exports to rest-of-world GDP is about 1.1, the elasticity with respect to the exchange rate of about 0.40. I use this equation to dynamically forecast 2018Q1-onward, and obtain this (note: units are in millions, monthly rate): The increasingly large forecast errors are associated with the beginning of the trade war. In other words, the historical correlations obtaining up to 2017 implied continued — albeit slow — growth in real exports through 2019, consistent with growth in the world economy, and a strong dollar.

The forecast error could be attributed to model misspecification, or the influence of other important determinants that were omitted from this three variable specification (the adjusted R2 is about 36%). It’s always hazardous to argue on the basis of residuals, but at first glance, given what we know about retaliation levied by our trading partners against swing state, the trade war and retaliatory actions seems not an implausible source of the forecast error.

So (once again), thanks Trump!

10 thoughts on “How Have Wisconsin Goods Exports Fared since 2018”