In my post on the dollar’s trajectory, one person asked about purchasing power parity (PPP). Here is a brief discussion of the relevance of this concept to exchange rate forecasts.

An unsophisticated way of thinking about the way the exchange rate is determined to think about what must be true about prices of goods expressed in a common currency. Consider about two identical widgets, one in Japan, one in the US. From an American’s perspective s/he can sell it in the US for let’s say $100, or in Japan. Suppose the exchange rate, S, is 0.01 $/¥ (i.e., 100 ¥/$). Then the American could ship it to Japan, and (assuming no transportation costs, tariffs, etc.) sell it for

(where i pertains to the i-th good, US refers to US and JP to Japan) Now consider the Japanese widget. If it’s selling for more than Yen 10,000 (let’s say Yen 12,000), then the Japanese producer will be undercut by the US producer, who could sell it for Yen 11,999, and make a hefty profit relative to what s/he could in the US. Consequently the Japanese producer will be forced to drop his/her price. (If the Japanese price is less than the US, then the reverse would occur.) Now consider if there are many widgets in each country. Then the US producer would start shipping lots to Japan, driving down Japanese prices, and driving up US prices (as the supply of widgets in the US declines). This process is called arbitrage. Eventually prices (after adjustment by the exchange rate) would equalize. This suggests the following equality:

Here the price level in the US is psi percent higher than those in Japan after converting Japanese prices into dollar terms by way of the exchange rate.

One can think about a lot of reasons why this process might not happen completely, or very fast.

(i) First, transportation is costly for a lot of bulky or massive commodities.

(ii) Second, tariffs and other trade restrictions still exist.
(iii) Third, laws, regulations, and standards (health, safety, consumer protection) differ a lot between countries, so commodities or services may have to be altered in order to cross borders.

(iv) Fourth, and perhaps most importantly more macroeconomic issues, prices may be sticky. This condition may arise because firms don’t like changing prices all the time, or because workers don’t like changing wages continuously. This will lead to some “stickiness” in prices (in the latter case because prices depend on wages). Hence, one should not expect this equality in prices expressed in a common currency to hold every instant.

What does relative PPP imply for the dollar? In the figure below reproduced from Deutsche Bank, the relative PPP for the US trade weighted dollar is shown, along with the plus/minus 20 percent band. 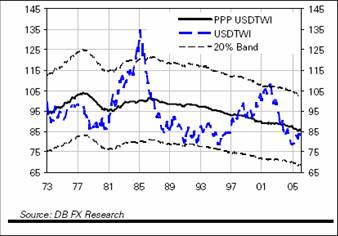 What is clear from this figure is that deviations from relative PPP can be large and persistent. A popular estimate for the half-life of a deviation from relative PPP is three to five years (Rogoff, Journal of Economic Literature, 1996). This is why relative PPP is not often used for short forecast horizon predictions of exchange rate. (A paper by Cheung and Chinn (JIMF, 2001) documents the disdain that forex traders have for PPP as a forecasting device). For more on PPP, see Taylor and Taylor, “The PPP debate”.

8 thoughts on “The dollar and purchasing power parity”