As the decoupling thesis becomes more and more tenuous [1], and the rest of the world exhibits greater evidence of a slowdown [2], [3], [4], leading to predictions of a more persistent and deeper slump in the US than previously anticipated [5], I wonder — where did that presciption of a one percentage point of GDP fiscal stimulus come from?

From the President’s speech on Friday:

After careful consideration, and after discussions with members of Congress, I have concluded that additional action is needed. To keep our economy growing and creating jobs, Congress and the administration need to work to enact an economic growth package as soon as possible.


Specifically, this growth package should bolster both business investment and consumer spending, which are critical to economic growth. And this would require two key provisions: To be effective, a growth package must include tax incentives for American businesses, including small businesses, to make major investments in their enterprises this year. Giving them an incentive to invest now will encourage business owners to expand their operations, create new jobs, and inject new energy into our economy in the process. [Emphasis in bold italics added: mdc]

As far as I know, there’s no measured threshold effect in fiscal policy. And if there is, why not 1.5 percentage points of GDP? Why not 2 percentage points? Is the Administration working backwards from projected growth via fiscal multipliers to obtain the 1 ppt. figure? Somehow I suspect not.

To put matters in perspective, consider where the debate has moved over just the past few weeks. Larry Summers writes an op ed in the January 6th FT, advocating: “…a $50bn-$75bn package implemented over two to three quarters [which] would provide about 1 per cent of gross domestic product in stimulus over the period of its implementation.”. On January 10th, the Hamilton Project and Brookings held a conference on fiscal stimulus; a number of around $100 billion is kicked around. Even on the 17th, Bernanke is quoted as noting the possible usefulness of a $70 billion stimulus (although he did not rule out smaller or larger stimuli) (Bloomberg). Now the number being cited as of the 18th is around $140 billion. All this has happened so fast that the White House “Fact Sheet” accessed on January 18th still lauded the the strong growth in the economy (it’s been changed since then):

More Than 8.3 Million Jobs Created Since August 2003 In Longest Continuous Run Of Job Growth On Record

On January 4, 2008, the Bureau of Labor Statistics released new jobs figures – 18,000 jobs created in December. Since August 2003, more than 8.3 million jobs have been created, with more than 1.3 million jobs created throughout 2007. Our economy has now added jobs for 52 straight months – the longest period of uninterrupted job growth on record. The unemployment rate remains low at 5 percent. The U.S. economy benefits from a solid foundation, but we cannot take economic growth for granted and economic indicators have become increasingly mixed. President Bush will continue working with Congress to address the challenges our economy faces and help facilitate long-term economic growth, job growth, and better standards of living for all Americans.


The U.S. Economy Benefits From A Solid Foundation

It’s been a quick turnaround from zero to 1 ppt. of GDP. The question I now want to pose is — if matters deteriorate further as the rest of the world sinks into slowdown — why not more? (Note — I’m not advocating more stimulus; rather I’m trying to highlight the constraints that have been imposed by the ill-conceived policy decisions of the past seven years.

I think the answer resides in the fact that we have been running deficits for the past seven years, and even at the top of the expansion, we were still running a deficit in excess of 1 percentage point of GDP. It’s also useful to consider what 1 percentage points of fiscal stimulus is now going — expenditures in the Iraq theater of operations.

As I’ve noted in previous posts (here, and here) costs of the troop level surge in Iraq were likely to push current costs (and future refurbishment and equipment replacement costs) further higher. My burn rate estimate for FY 2007 was on the order of $11 to $12 billion per month. In October 2007, the Congressional Budget Office estimated Fiscal Year 2007 expenditures at about $122 billion (see Table 2, below). 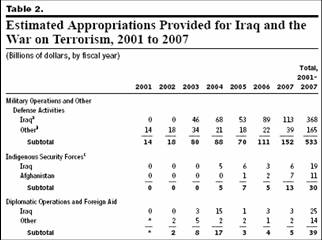 Table 2 from CBO, Statement of
Peter Orszag, Director, “Estimated Costs of U.S. Operations in
Iraq and Afghanistan and of Other Activities Related to the War on Terrorism,” before the Committee on the Budget U.S. House of Representatives (October 24, 2007).

So, if the economy softens even more than it has, one could certainly contemplate more tax cuts and government transfers and expenditures. But I think one has to carefully consider (1) how much more Treasuries the rest-of-the-world will want to purchase, given their bloated stocks of Treasury securities (2) and at what interest rate, and relatedly (3) how many more dollar assets (both private and government) they want at current yield/default risk characteristics, especially given likely trends in the dollar’s value in the next few quarters. (See Brad Setser on what it takes to get continued financing)

Hence, in my mind, 1 ppt. comes from the fact that we embarked upon a reckless path of long-lived tax cuts (especially in 2003) aimed at the highest income deciles at a time when the economy was growing, and expanding discretionary spending rapidly, as demographic and health care cost challenges loomed (or were exacerbated by Medicare Part D). Now when we need the maximal policy flexibility, we are, truly, facing the situation with (at least) one hand tied behind our back.

11 thoughts on “Why One Percent of GDP? Opportunity Cost Illustrated (Part III)”