Several months ago, I discussed the indicators of financial stress developed by the IMF in two posts [1] [2]. The working paper documenting and extending the results in the World Economic Outlook has just been released.

The analysis is quite comprehensive, and the IMF researchers have made the data available to those who wish to analyze the data themselves.

First, the stress indicators extend to 2009Q1, and show stress in both advanced and emerging market economies declining.

Second, the methodology of breaking down the data into tranquil and crisis periods has yielded interesting results. In discussing the two step Forbes-Chinn approach, they find the following:

Interestingly, and contrary to the original study by Forbes and Chinn (2004), we find that
financial linkages appear more important than trade linkages as determinants of stress
transmission in our sample. In addition, while linkages appear to play an important role,
further testing showed that country-specific vulnerabilities (such as current account or fiscal
deficits) are not an essential part of the stress transmission mechanism (that is, they are not
associated with betas). A further analysis of the role of country-specific vulnerabilities as
determinants of financial stress is undertaken in the following section.

Third, the paper sheds some additional insight on how much “good policies” can help insulate an economy from global financial turmoil.

Emerging economies are able to obtain some protection against financial stress from lower
current account and fiscal deficits during calm periods in advanced economies. However,
during periods of widespread financial stress in advanced economies, the calming effects are
too small to prevent stress transmission. That does not mean that such policy buffers are
ineffective. Rather they influence the transmission to the realeconomy (for example, by
using reserves to buffer the effects from a drop in capital inflows) and the duration of the
crisis, links that were however not studied in this paper.

The IMF’s updated WEO that came out today included the latest readings on the stress indices. Here’s a picture detailing some of the individual stress indices: 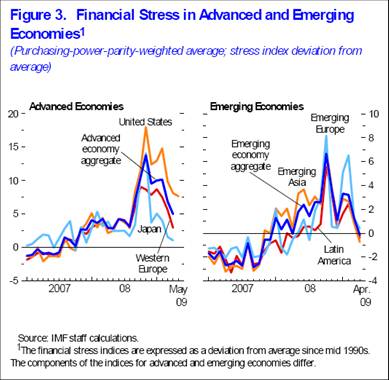