Both have to be “handled with care”.

We’re all tempted to make predictions on the basis of the last data point. And even more difficult to resist is the temptation to make definitive statements on the basis of data that are sure to be revised. For instance, we see this question from Casey Mulligan, “Where’s the GDP Disaster?”.

Last October, when we were told that spending and incomes were about to collapse, I predicted that “real GDP will not drop below $11 trillion (chained 2000 $).” 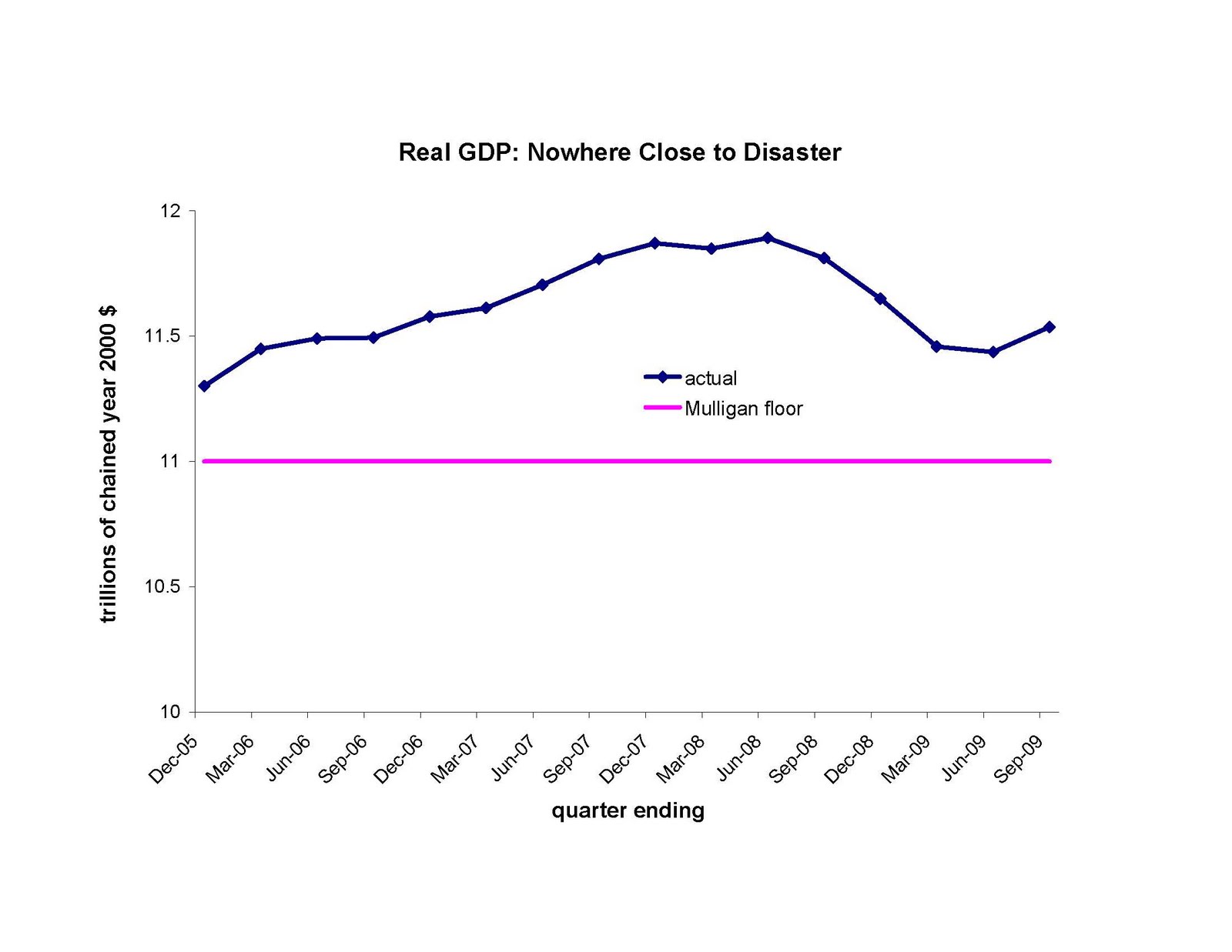 I think this is an excellent time to recapitulate the hazards of making definitive assessments on the basis of data that are sure to be revised [0] [1]. To illustrate this point, I go back to the last recession, which according to the NBER extended from 2001Q1-01Q4.

Figure 2: GDP in billion Ch.2000$, SAAR. GDP calculation involves deflating nominal GDP by the base year 2000 deflator, obtained by dividing the 2005-base chain deflator by .88648 (the value of the 2005-base deflator in 2000). The “alternate GDP path” applies the difference between the April ’02 and October ’03 estimates of 2001Q2 GDP (in log terms). NBER defined recession dates shaded gray, assuming recession ends in 09Q2. Source: St. Louis Fed ALFRED, NBER and author’s calculations.

The graph indicates that in 09Q2, GDP was only 2.3% above Mulligan’s floor.

In some sense, the critical aspect of Professor Mulligan’s argument that the events of 2008-09 were never going to be disasterous is that he made his projection conditional on none of the extraordinary measures undertaken by the Fed, nor on the the fiscal stimulus by the Federal government being implemented. It’s useful to recap his statement from October:

Now, I assume that Mulligan feels free to compare a forecast conditioned on no fiscal policy against one with fiscal policy to the extent he believes multipliers are near zero or even negative. And perhaps he believes money is neutral in the short run. If so, then of course it’s fine to make the comparisons he does. But for those of us who believe that monetary and fiscal policy have textbook effects, then making that comparison is problematic. In the absence of these stimulus measures, I believe we may very well have breached that 11 trillion floor.

To see this, consider CBO’s assessment that by 2009Q4, the stimulus package would have an impact of between 1.4 to 3.8 ppts of baseline GDP. The midpoint is 2.6 ppts. That’s well within the range of the Mulligan floor.

So, to conclude, in my view, a “GDP disaster” would have occurred in the absence of aggressive actions by the Federal Reserve, the US Government, as well as fiscal and monetary authorities abroad.

15 thoughts on “On Revisions and on Conditioning”