In the excitement over the debt ceiling debate, the increasing extent of fiscal drag, and anxiety about an economic slowdown, I have neglected discussion of the dollar. I still think that continued dollar depreciation is necessary to effect global rebalancing. I’d prefer it to happen by way of expansionary monetary policy, but we might get dollar depreciation as intransigent policymakers work hard to destroy the safe-haven role of US Treasury securities. [0] So, while all eyes are on Jackson Hole, here’s a quick, stream of consciousness review of some dollar-related issues.

In Figure 1, I present the long history of the real value of the dollar, to provide perspective. Notice that the dollar has been declining in value since early 2002.


The dollar index against other major currencies in July (last observation plotted) is only 2.6% lower than it was three years earlier. The index against a broad basket of currency is 4.9%.

I’d say we need more depreciation of the broad index (which includes China, and the other East Asian economies), rather than less. I know there are some people who argue that the Fed shouldn’t be debasing the dollar (where were these people in 2002?); of course, if one believes in a neoclassical model (which is consistent with fiscal policy ineffectiveness), monetary policy can’t affect real magnitudes in systematic fashion, so why care what the Fed does?


Figure 2 shows that once one takes into account the wage restraint exhibited in the US, along with fairly rapid labor productivity growth, US competiveness has increased substantially since 2002. There is a problem in making direct comparisons since the CPI deflated rate is computed against a broad set of trading partner countries, while the unit labor cost deflated series is computed against the other industrial countries the US trades with. Hence, an important omission is China. Presumably, if China were included, the downward trend would be less pronounced. How much less is difficult to say, given that it is hard to determine what unit labor costs are in China (for an example of the impact on the Chinese effective real exchange rate, see this post).

I’m a believer that continued low policy rates in the US, combined with macro weakness, will result in persistent dollar weakness. Dollar weakening is a view shared by the CBO, for this and other reasons, as related in its updated Budget and Economic Outlook (pp. 44-45), as well as Martin Feldstein. Currency market forecasters (here as surveyed by FX4casts.com) appear to have a different view (although there is considerable uncertainty), as shown in Figure 3.


In a recent paper, Catherine Mann at Brandeis University has outlined reasons why she believes the dollar is at turning point. From “Dollar Risk: Inflection Point or Continued Trend?”

…the double-digit depreciation of the dollar since February 2002 was
narrowing the external deficit (even before the Great Trade Collapse and rebound). Thus,
the need to sell dollar assets to finance external borrowing has been, on balance, smaller,
putting less depreciation pressure on the dollar. Yet, at the same time as the external
deficit has narrowed the fiscal budget deficit is much larger, implying a need to sell more
US Treasury securities to some investor, domestic or global.


Thinking about these factors follows generally the relationships and framework (albeit in
‘reverse’ ) from the last time the issue of dollar risk arose. That is, in 2000 the dollar was
still appreciating, but many thought that the trend was unsustainable because of the
magnitude of the US current account deficit and stock of international obligations, and
the narrowing budget deficit (into surplus) reducing the availability of US Treasury
securities, among other factors.


Applying the framework and analysis from 2000 to current data suggest an inflection
point for the dollar. First, based on an asset allocation view, there is plenty of head-room
for adding dollar investments into the global investor’s portfolio. Second, key global
players have not de-coupled, and in fact continue to depend on growth in US and Europe
to support economic activity at home. This habit of export-led growth, which has been
supported by the policy of under-valued exchange rates, remains entrenched, thus making
it difficult for these important players to allow own-currency appreciation even in the face of potential further capital losses on their increasing holdings of dollar-based
international reserves. Even countries that, on balance, do not heavily manage their
exchange rates are finding that their currency appreciations to date exact a toll on the
global competitiveness of their producers (witness the yen and Swiss franc interventions
in August 2011). Finally, with regard to holdings of US Treasury securities in
international reserves, despite some rhetoric toward diversification, purchases continue apace.
The sum of these factors, as well as a long-run chartist view, suggest that the trend
dollar depreciation has reached an end.

Personally, given the Chinese de facto crawling dollar peg, I think a lot hinges on China, and I have more hope that faster CNY appreciation will occur (where China leads, the rest-of-East Asia will, I believe, follow [6]). Figure 4 is a plot of the CNY/USD exchange rate over 2011. 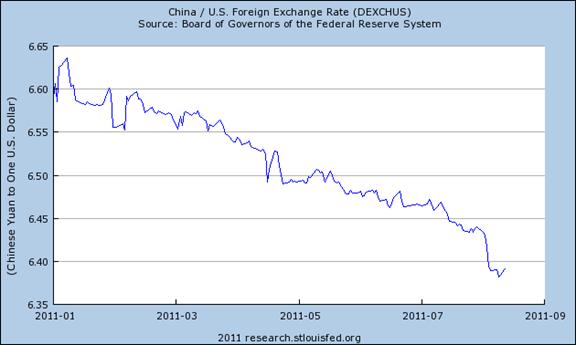 
China has moved from resumed CNY appreciation to accelerated appreciation of late. Martin Feldstein has argued that this move might be durable exactly because China needs to stifle inflation, and CNY appreciation is a key way to achieve that goal. So if the need for internal rebalancing (see today’s NYT for background) is not sufficient to induce Chinese policymakers to allow faster revaluation, the fear of inflation might be. (See a Mundell-Fleming interpretation here; you can see I’ve been recommending accelerated CNY appreciation for a long time).

How have movements in the dollar’s value, and policy measures at home and abroad, affected dollar holdings by the official sector? Figure 5 presents data from the most recently released IMF Composition of Foreign Exchange Reserve (COFER) report.

Figure 5: Central bank holdings of foreign exchange reserves, in millions of US dollars. US is USD, UK is British pounds, GY is Deutschemark, FR is French francs, JP is Japanese yen, SW is Swiss francs, NE is Dutch guilder, EC is ECUs, EU is euros, OTH is other, and UNALLOC is unallocated. Source: IMF, COFER, June 30 release.


One can see that reserve accumulation has definitely resumed since the 2008-09 global recession. Of that, a large share is “unallocated”, that is of unknown composition. It’s assumed that a large share is in US dollars. How is the dollar holding up as the key reserve currency? Figure 6 presents some estimates.


The dollar share appears to be declining rapidly if one looks at only reported dollar holdings. However, as is well known, most of the reserves that are not identified in terms of currency denomination are likely dollars. Assuming that 60% of those “unallocated” holdings are dollars yields a much less pronounced downward trend.

There are two important observations. These shares incorporate valuation changes, and so when the dollar loses value against other currencies, that shows up in the shares. Ted Truman at the Peterson Institute for International Economics has argued that one should also look at the constant value, or “quantity”, shares. In a recent Real Time Economic Issues Watch post, Allie Bagnall has tabulated the quantity shares for the dollar and the euro at 2010Q4, and the respective shares are higher and lower than the shares calculated using COFER data (although the changes are actually larger using quantities).

Bagnall (2011) documents my second observation: some of the recent movements in shares are being noticeably driven by Swiss National Bank intervention.

Accumulation of dollar assets is not only undertaken by central banks. Increasingly in East Asia, sovereign wealth funds have become important players.

Chart 9 from “Sovereign Wealth Funds: New Challenges from a Changing Landscape,” Testimony of Brad Setser Before the
Subcommittee on Domestic and International Monetary Policy, Trade and Technology of the Financial Services Committee U.S. House of Representatives (September 10, 2008).


Unfortunately, there isn’t much of an update on the time series estimates of sovereign wealth fund holdings; they now exceed $3.3 trillion [Truman, (2011)]. And we don’t know exactly what they’re up to. That point is documented by a recent Policy Brief by Bagnall and Truman at PIIE.

In short, even when the COFER data comes out at the end of the year, and we get data of the 3rd quarter on foreign exchange reserves, we still not know how much damage the display of political hostage taking Republican intransigence with respect to raising desperately needed tax revenue over the medium term horizon has inflicted on the dollar’s role as a reserve currency, and as an international currency. So, we might get that “dollar debasement” (against other currencies) — just not through monetary policy but by other means.